(New York, N.Y.) — Today, the Counter Extremism Project (CEP) is launching the first of a new series, Extremist Content Online: Facebook Edition, that will track extremists’ misuse of Meta-owned Facebook to spread propaganda, recruit followers, and incite violence. The content found by CEP researchers on Facebook are clear violations of the platform’s terms of service, yet extremist and terrorist content often fails to be removed.

“Four years ago, Mark Zuckerberg famously claimed that a mythical 99 percent of terrorist and extremist content is removed from Facebook,” stated CEP Executive Director David Ibsen. “Zuckerberg’s claim was based on overly optimistic assumptions that were impossible to independently verify. Predictably, the core problems still exist, and CEP continues to easily locate extremist and terrorist material on Facebook.

“Empty platitudes and PR-driven initiatives are not acceptable responses to pro-ISIS accounts disseminating propaganda, links to videos of terror attacks such as the recent Buffalo mass shooting, antisemitic and neo-Nazi accounts, as well as pages run by individuals sanctioned by the U.S. Treasury Department.

“Additionally, Facebook’s own Oversight Board recently criticized the company for its lack of transparency in relation to its content moderation policies. In response, CEP stated that if Facebook was truly concerned about improving online safety, Meta and Facebook should provide the Oversight Board with access to any and all information related to its inquiry; bring on external experts with core computer science skills, such as U.C. Berkeley professor and CEP Senior Advisor Dr. Hany Farid, onto the Oversight Board; and integrate Oversight Board members onto its corporate board. CEP remains committed to holding Facebook accountable and to drawing attention to the areas where the platform is misguided.”

One account, with over 1,200 friends, used a photo of the November 2, 2020, Vienna attacker, Kujtim Fejzulai, as a profile photo. Another account with over 850 followers, posted several pieces of pro-ISIS content, including a photo on April 30, originally released in 2015, that showed ISIS fighters executing an alleged gay man in Kirkuk, Iraq, as well as multiple other propaganda photos. Numerous pieces of propaganda located by CEP had over 100 likes and other interactions. 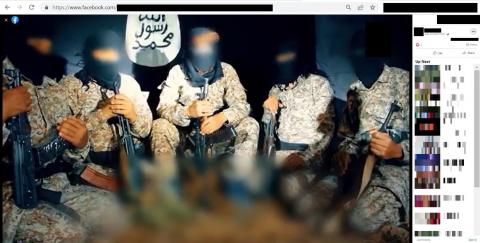 On June 27, ISIS released a propaganda video via their self-proclaimed Iraq province titled “From the Land of Iraq to the Lions of Africa.” The video is the second in a series. The previous video was released on June 23 via ISIS’s Syria province. Footage shows a group of three ISIS fighters and an additional individual ISIS member congratulating the successes of the group’s affiliates in African provinces and urging immigration to ISIS-held territory in Africa.

The video was released on Telegram, Hoop, and a pro-ISIS website. CEP also located the video on the Internet Archive, Facebook, and Odysee.

ISIS propaganda video “From the Land of Iraq to the Lions of Africa” on Facebook, two days after CEP reported the video for violating the website’s policies. The video had 865 views on June 30. The video was modified, included having the introduction removed, a logo placed on the bottom right, and color modified, to evade being removed by Facebook.