“There is no way to independently verify Mr. Zuckerberg’s claims that 99 percent of terrorist and extremist content is removed from Facebook,” said CEP Executive Director David Ibsen. “In addition, even if those claims are true, given the volume of content uploaded to Facebook by the platform’s estimated 2.2. billion active users on a daily basis, the one percent of terrorist content that is not removed is a significant amount that needs to be addressed. CEP finds extremist content on Facebook on a regular basis, which shows that Facebook and the entire tech sector have much more work to do to stop its proliferation on their platforms.”

“Mr. Zuckerberg’s view of artificial intelligence (AI) is overly optimistic and assumes that advances in AI will continue at their recent pace," said CEP Senior Advisor and Dartmouth College Professor of Computer Science Dr. Hany Farid. "History has shown that this is likely not the case. Mr. Zuckerberg also ignores the fact that these same AI systems can and are being used by adversaries to circumvent detection.  AI systems – in partnership with well-trained reviewers – can have an impact.  The human component, however, cannot be ignored, as Zuckerberg seems to do.”

In advance of this week’s hearings with Facebook CEO Mark Zuckerberg, CEP encouraged federal lawmakers, whose top priority is public safety, to hold tech companies accountable for their actions, including their failure to effectively and transparently take action to identify and permanently remove content from their sites that has been implicated in terrorist attacks, as well as allowing fake news in the form of doctored audio and video content to persist on their platforms.

In today’s hearing, lawmakers cited specific examples of extremist content that currently exists on Facebook, as cited below in the exchange with Congresswoman Susan Brooks (R-IN).  CEP’s findings are consistent with the examples Members of Congress raised in their line of questioning at today’s hearing, examples of which are included in the background section below.

CONGRESSMAN PETE OLSON: “I've also been told that about 20,000 of these people, including contractors, do work on data security.  Is that correct?”

MARK ZUCKERBERG: “Yes.  The 27,000 number is full-time employees.  The security and content review includes contractors of which there are tens of thousands.  Or will be.”

OLSON: “Okay, so roughly at least half your employees are dedicated to security practices.  How can Cambridge Analytica happen with so much of your workforce dedicated to these causes?  How did that happen?”

ZUCKERBERG: “Well, Congressman, the issue with Cambridge Analytica and Alexander Kogan happened before we ramped those programs up dramatically.  But one thing that I think is important to understand overall is just the sheer volume of content on Facebook makes it so that no amount of people that we can hire will be enough to review all of the content.  We need to rely on and build sophisticated AI tools that can help us flag certain content.  And we're getting good in certain areas.  One of the areas that I mentioned earlier was terrorist content, for example, where we now have AI systems that can identify and take down 99 percent of the Al Qaeda and ISIS-related content in our system before someone, a human even flags it to us.  I think we need to do more of that.” (“Facebook: Transparency and Use of Consumer Data,” U.S. House Committee On Energy & Commerce, 4/11/18)

CONGRESSWOMAN SUSAN BROOKS: “Thank you Mr. Chairman.  Thank you, Mr. Zuckerberg for being here today.  It’s so critically important that we hear from you and your company because we believe that it’s critically important for you to be a leader in these solutions.  One thing that has been talked about just very little that I think is very important and I want to make sure there’s appropriate attention on how the platform of Facebook, but even other platforms, and you’ve mentioned it a little bit, how you help us in this country keep our country safe from terrorists.  I’ve talked with lots of people who actually continue to remain very concerned about recruitment of their younger family members and now we’re seeing around the globe an enhanced recruitment of women, as well, to join terrorist organizations.  So, I’m very, very concerned.  I’m a former U.S. attorney so when 9/11 happened, you didn’t exist.  Facebook didn’t exist.  But since the evolution after 9/11, we know that Al Shabaab, Al Qaeda, ISIS has used social media like we could not even imagine.  So, could you please talk about, and then you talked about the fact that if there is content that is objectionable or a danger that people report it to you.  But what if they don’t?  What if everybody assumes that someone is reporting something to you?  I need you to help assure us as well as the American people what is Facebook’s role, leadership role, in helping us fight terrorism and help us stop the recruitment because it is still a great danger around the world.”

ZUCKERBERG: “Congresswoman, thanks for the question.  Terrorist content and propaganda has no place in our network and we’ve developed a number of tools that have now made it so that 99 percent of the ISIS and Al Qaeda content that we take down is identified by these systems and taken down before anyone in our system even flags it for us.  So that’s an example of removing harmful content that we’re proud of and that I think is a model for other types of harmful content, as well.”

BROOKS: “Can I ask though and I appreciate I’ve heard you say 99 percent and yet, I didn’t go out and look for this, but, yet, as recently as March 29, ISIS content was discovered on Facebook, which included an execution video.  March 29.  On April 9, there were five pages located on April 9 of Hezbollah content, and so forth.  And so what is the mechanism you’re using?  Is it artificial intelligence?  Is it the 20,000 people?  What are you using to – because it’s not – I appreciate that no system is perfect.  But yet, this is just within a week.”

ZUCKERBERG: “Congresswoman, it’s a good question.  It’s a combination of technology and people.  We have a counter terrorism team at Facebook…”

ZUCKERBERG: “Two-hundred people are just focused on counter terrorism and there are other content reviewers who are reviewing content that gets flagged to them, as well.  So, those are folks working specifically on that.  I think we have capacity in 30 languages that we’re working on.  And in addition to that, we have a number of AI tools that we’re developing, like the ones that I’ve mentioned that can proactively go flag the content.”

BROOKS: “And so you might have those people looking for the content.  How are they helping block the recruiting?  It’s still your platform as well as Twitter and then Whats App is how they then begin to communicate, which I understand you own, is that correct?”

BROOKS: “So, how are we stopping the recruiting and the communications?”

ZUCKERBERG: “We identify what might be the patterns of communication or messaging that they might put out.  And then design systems that can proactively identify that and flag those for our teams.  That way we can go and take those down.”

BROOKS: “Thank you.  My time is up.  Thank you and please continue to work with us and all the governments who are trying to fight terrorism around the world.”

ZUCKERBERG: “Thank you, we will.”

Description: The Facebook page for Hezbollah’s official group commemorating martyrs.  The page has over 60,000 “likes” and over 61,000 followers. 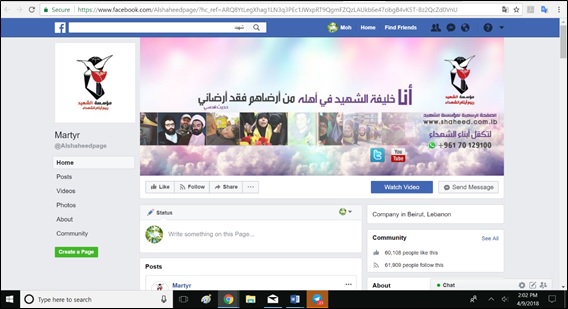 Description: A Hezbollah affiliated media group.  The page has over 16,000 “likes” and follows. 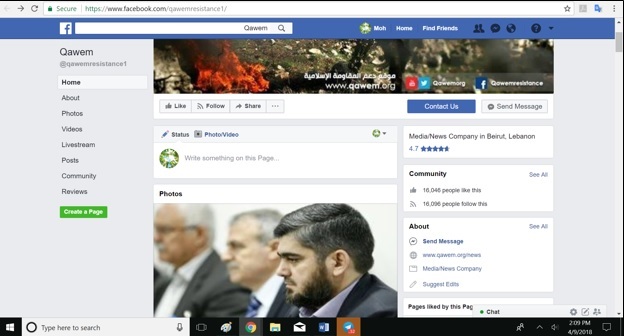 Description: A page full of Hezbollah propaganda videos and images. The page lists moqawama.org (a Hezbollah website) as its affiliated website.  The page has been “liked” by over 1,500 people and has over 1,500 followers. 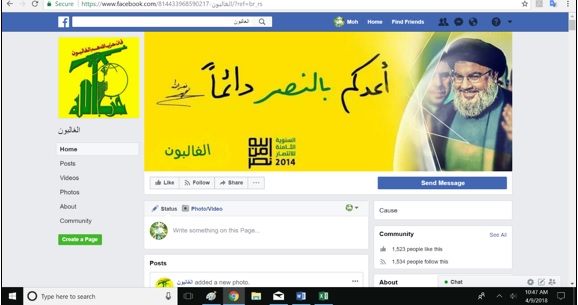 Description: A pro-Hezbollah page that contains propaganda videos and images from the group.  Lists a Hezbollah website, http://moqawama.org, as its affiliated page. Has over 70 “likes” and follows. 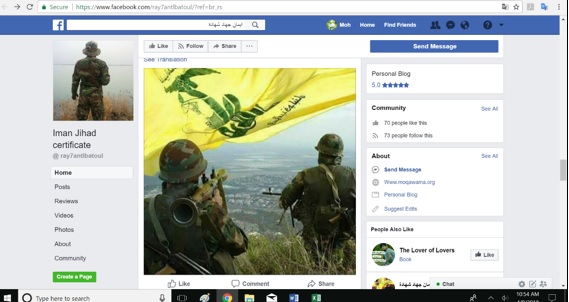 Description: A page that lists fallen Hezbollah fighters and offers commemorations.  The page has over 3,600 “likes” and follows and lists a Hezbollah website, www.moqwama.org, as its affiliated website. 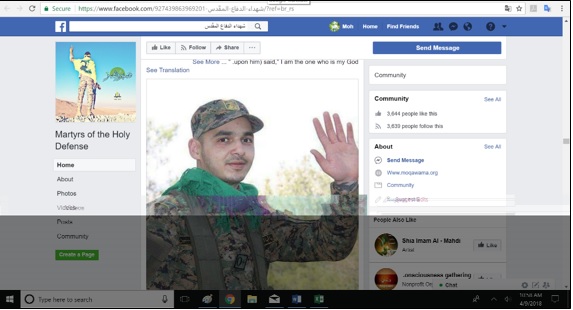 Description: A Facebook community for posting photos and commemorating Hezbollah fighters killed in Syria.  The page has over 900 “likes” and is followed by over 900 people on Facebook. 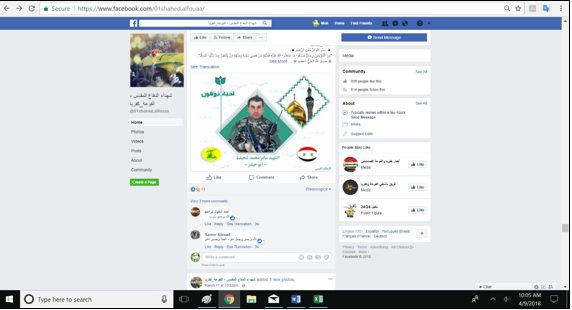 Description: A Facebook community for posting photos and commemorating Hezbollah fighters killed in Syria.  The page has over 400 “likes” and is followed by over 400 people on Facebook.  The page has also posted Hezbollah video propaganda and lists a Hezbollah website, www.moqwama.org, as its affiliated website.

Description: Claims to be a Hezbollah fighter in his profile.  Posted a Hezbollah propaganda video. 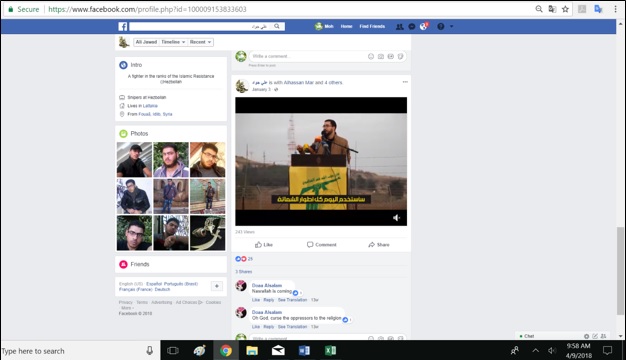 Description: An individual photographed in a military uniform with Hezbollah patches.  The individual has posted a photo of a Hezbollah funeral procession and a propaganda image of an armed fighter with the Hezbollah flag in the background. 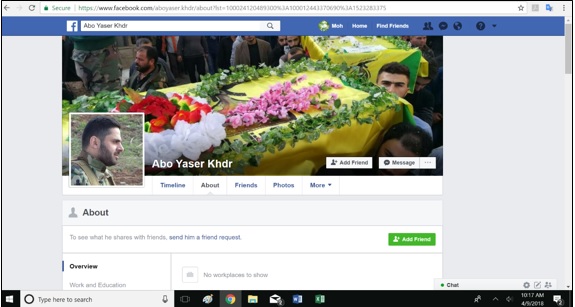