(New York, N.Y.) — The Counter Extremism Project (CEP) reports weekly on the methods used by extremists to exploit the Internet and social media platforms to recruit followers and incite violence.

Over a week after the deadly white supremacist shooting in Buffalo, New York, supporters of the gunman continue to spread the attack video, his manifesto, and praise for his actions online. On Telegram, a large white supremacist channel allegedly connected to the Proud Boys was deleted, however, a new version was created within 24 hours. This channel also claimed that it was more important than ever to promote the Great Replacement Theory because of the media attention it was getting following the Buffalo shooting. A neo-Nazi music album monetized with advertising was located on YouTube, as well as 20 accounts on Instagram that violated the platform’s Community Guidelines on hate speech, including one that openly supported the Buffalo attacker.

In addition, on the bulletin board style website JustPaste.It a pro-ISIS guide for making homemade explosives was posted. Finally, the sixth issue of the pro-ISIS magazine “Voice of Khurasan” was released.

The week of May 15 to May 21, CEP continued to find content praising the Buffalo, New York attacker, spreading the attack video, and sharing his manifesto. On 4chan, users made posts supporting the gunman and his murder of ten people and injuring three others in a racist attack that President Joe Biden called an act of “domestic terrorism.” Other posters called for acts of violence against the media due to what was portrayed as their negative coverage of 4chan. Other imageboard users blamed the attack on Covid-19 lockdowns or claimed that the attack itself was committed either by the U.S. government or allowed to happen to lead to a government crackdown.

Users of an imageboard on the dark web that explicitly supports acts of white supremacist terrorism posted links to the attacker’s manifesto and video. Forum members called the attack “impressive” and heroic and noted with approval that the perpetrator modeled his assault on the Christchurch terrorist attack.

A website that spreads the work of the neo-Nazi James Mason and supports the group National Socialist Order criticized the attack as unproductive. The author claimed that acts of lone-actor violence were often promoted by individuals secretly working for the federal government and that white supremacists should not commit these types of attacks because the individuals killed were not influential, and perpetrators would spend the rest of their lives in prison. The author stated that the assault allowed the government to further crack down on the extreme right. The essay concluded by stating that attacks on electrical infrastructure that were hard to attribute to a single individual or group were more productive.

On May 16, Telegram deleted a white supremacist channel allegedly linked to the Proud Boys, however, a new version was created within 24 hours. The channel, which is reportedly managed by several high-ranking members of the Proud Boys, posts a wide variety of extreme racist, antisemitic, anti-LGBT, Holocaust denial, pro-neo-Nazi content, and content that promotes the Rise Above Movement and Patriot Front. The channel had over 41,000 subscribers on May 16, compared to over 26,000 subscribers for the main Proud Boys Telegram channel. The channel created on May 16 posted a variety of racist, antisemitic, and misogynistic content after it returned, including content on May 18 stating that it was more important than ever to promote the Great Replacement Theory because of the media attention it was getting following the May 14 Buffalo shooting. The new channel had approximately 4,500 subscribers three days after it was created.

CEP researchers located a white supremacist music album uploaded to YouTube on May 12 with ads playing before the videos. The album cover is a modified image from The Turner Diaries, and several of the songs contain audio samples of William Luther Pierce reading from the book. Other audio samples advocate for acts of terrorism, such as in one piece advocating violence against Israel that repeats “death rather than slavery.” The album was uploaded by an account coordinating a campaign to raise money on behalf of an Austrian rapper who used the name Mr. Bond, who was sentenced to 10 years in prison for inciting violence and promoting neo-Nazism. CEP reported the album to YouTube, but it was still online and still monetized with ads three days later.

During the week of May 15 to May 21, CEP researchers found 20 accounts on Instagram that violated the social media site’s Community Guidelines on hate speech. Multiple accounts promoted the Great Replacement Theory, posted racist and antisemitic content, posted neo-Nazi symbols, or content promoting Hitler. One account specifically posted a video of American white supremacist Nick Fuentes promoting the Great Replacement Theory, and another profile posted content supporting the perpetrator of the Buffalo attacker. Other accounts advocated for violence against LGBT people, while a different account posted content praising the misogynistic murderer, Elliot Rodger. The accounts had an average of 373 followers, ranging between two and 1,696, and a median of 136. Instagram removed two accounts before CEP had a chance to report them. Of the 18 accounts CEP reported, only two were removed. Instagram did not remove content that indicated explicit support for the Buffalo attacker, nor did Instagram remove posts that included neo-Nazi symbols, and a variety of white supremacist and anti-LGBT content. 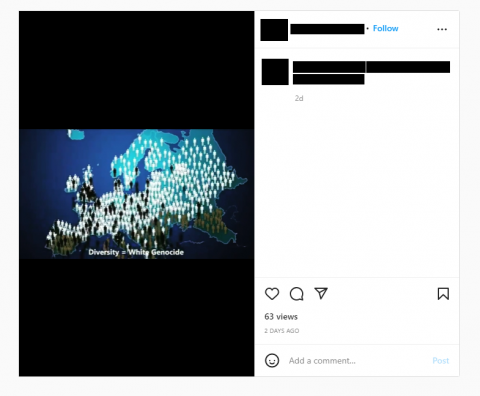 Still image from a video promoting the racist Great Replacement Theory on Instagram. Screenshot taken on May 19, 2022.

On May 19, CEP researchers located a guide for making homemade explosives on the bulletin board style website JustPaste.It. The manual contained imagery from an ISIS propaganda video and was created by the pro-ISIS group al-Saqri Foundation, which has published manuals over several years on the manufacture and use of explosives, poisons, and other weaponry. The document had been viewed almost 100 times when it was located. JustPaste.It removed the guide after CEP reported it.

On May 17, the pro-ISIS Khorasan Province (ISIS-K) al-Azaim Foundation released the sixth issue of the web magazine “Voice of Khurasan”. The magazine’s main article criticized democratic forms of government, alleging that they allowed corruption and discrimination, promoted immorality, weakened family structures, and promoted the pursuit of money over socially or religiously fulfilling practices. The article implied that these problems do not exist in ISIS’s interpretation of religious government. The second article stated that the West was waging a form of psychological warfare against ISIS and its supporters through the distortion of media, the spread of propaganda, and the promotion of religious moderates. The article stated that this was part of an attempt to show that ISIS is unjust or has no chance of winning. Other articles condemned nationalism and the Taliban for allowing the practice of religions other than Sunni Islam.

The magazine was spread on Telegram, Hoop, and a pro-ISIS website on the dark web. The magazine was also uploaded to the Internet Archive, who made it only available to logged in users after CEP reported it.