Late Friday night an ISIS cell detonated bombs at three locations on the outskirts of Damascus, destroying the main pipeline carrying gas to the Deir Ali and Tishreen power plants and two nearby power pylons. This was the first confirmed ISIS attack in the governorate since the group was expelled from the southern suburbs of Damascus in May 2018. The attacks forced the Deir Ali, Syria’s second largest power plant, and Tishreen plants to shut down—plunging the capital city into a blackout.

Two aspects of these bombings are particularly interesting: the location and timing. The pipeline was hit less than five miles from the Damascus International Airport in an area surrounded by military bases and checkpoints. However, the power plants lie on the outskirts of the city between the urban areas and the edge of the Syrian Badia—a massive area of deserts and mountains stretching all the way to Iraq and the Euphrates River. Just a few miles north of the attack sits the town of Otaiba, once a crucial logistical hub for rebel factions operating in Eastern Ghouta and Damascus’ suburbs, particularly between 2012 and 2014. According to Syrian analyst Suhail al-Ghazi, rebel factions used smuggling routes that stretched from Otaiba to Qaryatayn in the Homs countryside, after which some went further north while other routes diverted into the Badia.

ISIS cells have gradually made their way back into the Qaryatayn countryside since October 2020, when the group ambushed regime forces using a fake checkpoint. Subsequent attacks occurred in February, March, and July 2021. The March attack, in particular, was significant in that it involved ISIS fighters capturing a regime soldier and publishing pictures of his execution within hours—the first official ISIS media to come from the town since 2018. As noted at the time, this event may have signaled a strengthening of ISIS’s position around the strategic town, which sits along a highway connecting Damascus city with Palmyra and the core of ISIS territory in central Syria.

Considering the above, it seems most likely that the ISIS cell that carried out the Damascus pipeline attack utilized existing smuggling routes from Qaryatayn to Otaiba, taking advantage of the pre-established ISIS foothold in the Qaryatayn countryside to prepare for the bombings. It is also worth noting that ISIS has recently emphasized attacks on critical infrastructure across its wilayats, but particularly in Iraq. While ISIS has for years targeted infrastructure in Iraq, the group began what appears to be a concerted campaign in June 2021. 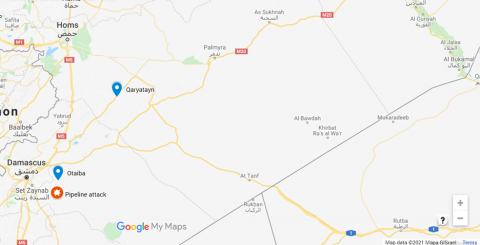 The timing of the Damascus pipeline attack appears to be intentional as well. ISIS’s official claim for the attack framed it as part of their ongoing “economic war” against the regime, and indeed the bombings appeared timed to coincide with the conclusion of a new gas deal between Egypt, Jordan, Syria, and Lebanon. Under the deal’s terms, Egyptian gas will be piped to Lebanon through Jordan and Syria (with Syria receiving a portion of the gas in payment). The attack also occurred the night after Iranian fuel arrived via trucks in Lebanon, after passing through Syria.

With these events in mind, it is difficult to view the timing of the attack as simply coincidental. Rather this ISIS attack seems purposefully timed to remind both Syria and the region of the terrorist group’s power and presence in regime-held areas. Furthermore, the pipeline bombing serves as a reminder to the regime that ISIS remains a crucial spoiler as the Syrian government attempts to rehabilitate its broken fuel production and transportation infrastructure. Regime security forces, alongside their Russian and Iranian allies, have worked since late 2018 to recapture, secure, and rebuild oil and gas fields across central Syria.

While ISIS has not made any attempts to seize these fields—and likely will not for the foreseeable future—its fighters have attacked at least nine separate oil or gas fields at least 15 times since mid-2020. The attack in Damascus is a reminder to the regime that if they want to keep the gas flowing, they will need to cut deals with ISIS as they did during the height of the group’s territorial control.

Many observers have gone back to ignoring ISIS’s insurgency in the central Syrian Badia after the sharp decline in activity early this year. Despite this lack of coverage, ISIS continues to utilize this strategic space to train new fighters, raise money, and shuttle supplies to and from its cells in northeast Syria and Iraq. The pipeline bombings come amid a spike in ISIS attacks in Homs that have killed a Russian Lieutenant Colonel and dozens of Syrian soldiers and allied foreign fighters over the past two weeks. This weekend’s attack is significant in its complexity and undeniable evidence of ISIS’s reach in regime areas, despite a nearly nine-month counter-insurgency campaign that saw ISIS cells withdraw from several parts of the Badia. However, it is also a reminder that when these ISIS cells inevitably go quiet again, the training camps, weapon caches, and smuggling routes remain active and ready to strike.