The existence of the StoneToss comic on Facebook and Instagram demonstrates that these platforms are unable or unwilling to effectively address hate speech and antisemitism, even among large well-trafficked pages. The comic frequently endorses extreme right-wing and white nationalist themes, antisemitism, racism, Islamophobia, and anti-LGBTQ sentiments. The creator of StoneToss, “Stone,” has obscured content that would run afoul of Facebook’s community guidelines, directing users instead to his website—where there is no discernable attempt at moderation—and to his crowdfunding profile. For these reasons, Facebook and Facebook-owned Instagram should immediately remove StoneToss for violating its stated policies prohibiting hate speech.

StoneToss has a sizable following. The Facebook page has over 103,000 followers, with comic posts in March and April 2021 garnering an average of approximately 5,300 reactions and 800 shares. Similarly, the StoneToss Instagram account has over 86,000 followers, with posts of comics receiving an average of 19,000 likes during the same period. The comments sections for posts on both sites are opportunities for Stone’s fans to viciously attack protected identity categories.

In some cases, content posted on the StoneToss accounts that would violate Facebook or Instagram’s community guidelines has been blurred, with instructions to visit the comic’s website to view the content. This behavior shows that Stone is aware that certain content violates Facebook's community guidelines. In one case, content claimed that a Jewish conspiracy secretly promoted QAnon, while another celebrated the suicides of transgender people. Posting blurred content that violates Facebook policies and directing users to a website violates the spirit of the community guidelines preventing hate speech. According to Facebook, the community guidelines exist to prevent “an environment of intimidation and exclusion,” which “in some cases may promote offline violence.” StoneToss’s website itself also contains an unmoderated comment section rife with racist, antisemitic, and anti-LGBT posts as well as calls for violence.

By allowing StoneToss a platform, Facebook and Instagram have exposed the political comic to a huge audience, enabled it to cultivate a fan base, and allowed the illustrator to direct traffic to his unmoderated website. While Facebook is not responsible for the content posted on external websites, the company is responsible for allowing itself to become the front door to a website that celebrates hate and discrimination.  If Facebook and Instagram remove posts promoting the great replacement theory or that dehumanize people based on their gender identity, they must immediately remove the StoneToss comic. 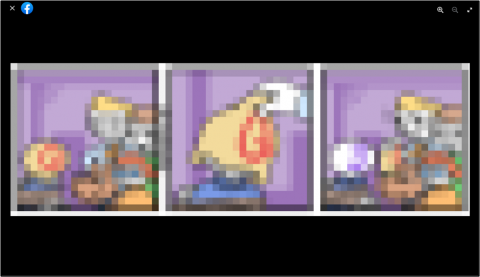 Example of a blurred comic on StoneToss’s Facebook page. Accompanying text directs the user to StoneToss’s website to view the uncensored comic.

The Far Right on U.S. Campuses

What the enemy desires most is to silence our message. Our [web]sites keep getting taken down and we keep putting them back up.

From over 3,000 miles away, Finland attempts to educate Finnish children of ISIS parents detained in Syria’s al-Hol… https://t.co/wfF9EZeQhm

At least 22 civilians killed in an attack on a camp for internally displaced people in the northeast DRC. The same… https://t.co/FiLxHKDwy4

The U.S. today revoked designation of the Revolutionary Armed Forces of Colombia (FARC) as a foreign terrorist orga… https://t.co/p1tkLqkQsd

Working paper finds that disinfo “used as a kind of Trojan horse" to push New Zealanders to anti-vax and then far-r… https://t.co/kD0zmgXuXr