Each of these features has served to lure users to extremist content on YouTube, despite CEP's calls for YouTube to cease hosting Awlaki content. As CEP has documented, Awlaki is cited as an influence in dozens of U.S. and European extremist cases. Extremists have also reportedly been inspired to carry out attacks by watching other extremist preachers on YouTube, like U.S. extremist Ahmad Musa Jibril . One of the assailants in the June 3, 2017, London Bridge attack was reportedly radicalized while watching Jibril's videos on YouTube. *Martin Evans, Nicola Harley, Harry Yorke, "London terrorist had twice been referred to police over his extremist views," Telegraph (London), June 4, 2017, http://www.telegraph.co.uk/news/2017/06/04/london-terrorist-had-twice-referred-police-extremist-views/.x 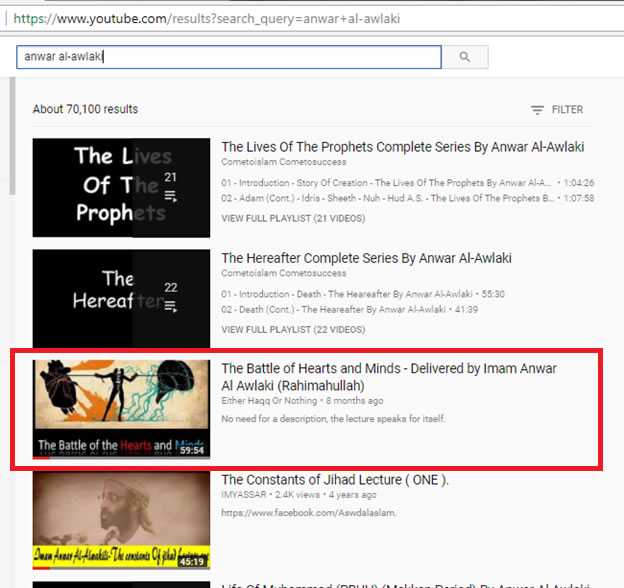 "Battle of the Hearts and Minds" lecture:

YouTube has taken a contradictory approach to Awlaki's "Battle of the Hearts and Minds" lecture, removing some versions of the lecture while allowing other versions to remain up. At some point between June and August of 2017, a warning label was placed before at least one copy of the lecture that was allowed to remain live on the platform, and interested viewers were directed to click "I understand and wish to proceed" if they wanted to access the content. 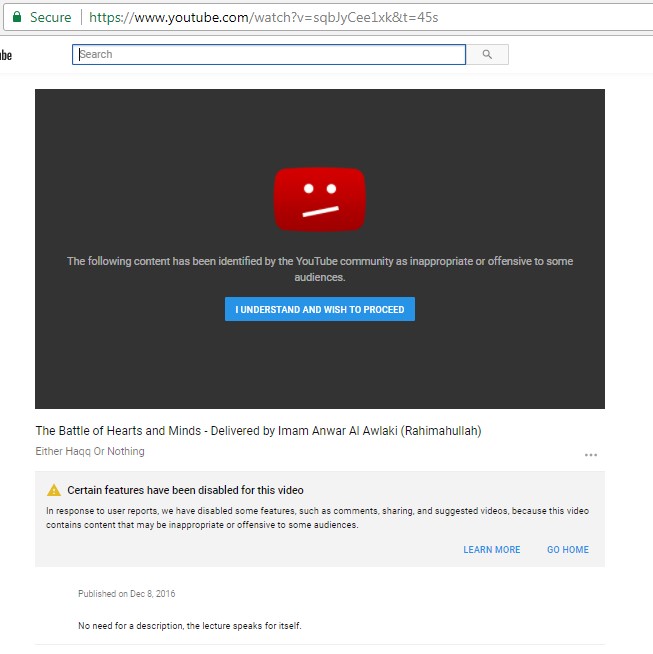 YouTube warning label appearing on one copy of Awlaki's "Battle of the Hearts and Minds" lecture (August 2017). YouTube informs viewers that the video "may be inappropriate or offensive to some audiences." Viewers are nonetheless directed to click "I understand and wish to proceed." In place of a comment section, YouTube's platform shows "No need for a description, the lecture speaks for itself." 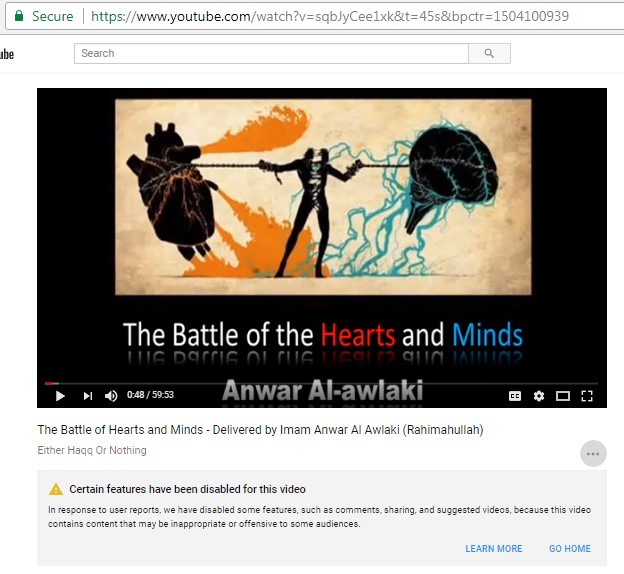 Upon clicking "I understand and wish to proceed," viewers are able to listen to nearly an hour of Awlaki's content, from his infamous "Battle of the Hearts and Minds" lecture.

Another copy of the "Battle of the Hearts and Minds" lecture has been live on the site for eight years: 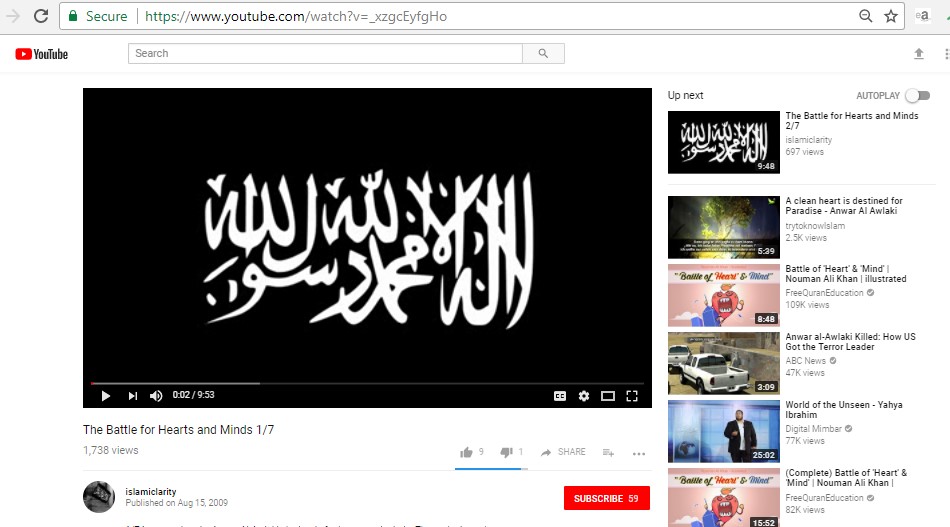 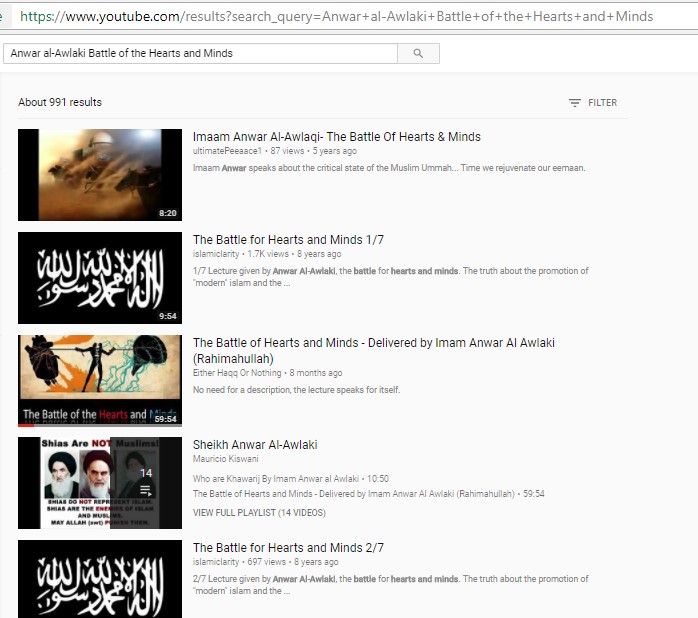 A search for Anwar al-Awlaki's Battle of the Hearts and Minds yields more than 900 search results. (August 2017)

Excerpt from the Battle of Hearts and Minds:

"Dear brothers and sisters we are not only victims, of U.S. military and political aggression, but we are also victims of U.S. lies! They have been lying about our brothers, charging them with false accusations, until they put hatred of them in our hearts, and they have planted the seeds of disunity amongst us! ... [we] are victims of this Western media and U.S. lies. We need to be aware! We need to be careful."

"Miss Bernard and her cronies at Rand [Corporation] and [the] Pentagon should know that their plan would fail because Allah is the best of planners! And that the fundamentalists and extremists, whom they despise, are not only going to win in Afghanistan and Iraq, but they will continue their march, until they drag your people, the Jews, out of the Holy Land and plant their black banners on the roof tops of Jerusalem."

"[W]hat I really fail to understand, is how can the martyr, the Shaheed, who willingly and happily, hands over his soul to Allah, who walks towards his faith, with pleasure, and faces death with a smile, what I fail to understand is how can you call such a person a 'coward'!"

2. Autofill (a feature that suggests search terms as you type):

YouTube hosts an alarmingly large number of search results related to Anwar al-Awlaki, the late al-Qaeda leader who—as CEP has documented—served as a radicalizing influence in dozens of terrorist cases in the United States and Europe. Orlando gunman Omar Mateen and San Bernardino shooter Syed Farook are among the many believed to have been radicalized to terrorism in part through exposure to Awlaki's lectures. Boston bombers Dzokhar and Tamerlan Tsarnaev are among those who were documented to have accessed these lectures through YouTube in particular.

Many of the videos available on YouTube are lectures by Awlaki himself, posted online by ostensible supporters of Awlaki, including his ideology, and his terrorist legacy. A significant and worrisome subset of these lectures employ language that explicitly or implicitly endorses violence against American and Western civilians. These videos and others—including Awlaki's "Battle of the Hearts and Minds" lecture, his "Constants on the Paths of Jihad" lecture, and his "Never Trust a Kuffar [non-believer]" lecture—are not only hosted on YouTube, but are made particularly accessible and normalized through YouTube's search engine process, its autofill feature, and its recommendations section.

CEP has repeatedly called on YouTube to cease serving as a vehicle for terrorist recruitment by Awlaki. This call includes the request to cease hosting all of Awlaki's lectures, and to cease promoting Awlaki's most extremist and inciting lectures through the company's search, autofill, and recommendations algorithms. While CEP has seen some progress in the takedown of certain copies of Awlaki's videos, other copies of the lecture remain readily accessible and live on the platform for months or years at a time. Confusing the matter, YouTube has added a warning label on at least one copy of Awlaki's "Battle of the Hearts and Minds" lectures, while enabling users to still access the video and acknowledging that YouTube has reviewed the video and allowed it to remain up.

Until YouTube refuses to host Awlaki's extremist content on its platform, individuals will continue to turn to YouTube for exposure to messaging by Awlaki and other influential and radicalizing preachers in order to self-radicalize to extremism. This radicalization process too often does not end online, but instead results in the deaths of those radicalized to violence, and their victims in Orlando, San Bernardino, Paris, and beyond.