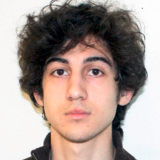 In April 2013, then-19-year-old Tsarnaev carried out the Boston Marathon bombings alongside his brother, Tamerlan Tsarnaev, then age 26.

At the Boston Marathon, the Tsarnaev brothers placed two pressure-cooker bombs near the race’s finish line. Each device “killed at least one person, maimed, burned and wounded scores of others, and damaged public and private property,” according to the criminal complaint filed against Tsarnaev.“United States of America v. Dzhokhar Tsarnaev,” United States District Court for the District of Massachusetts, April 21, 2013, http://www.justice.gov/iso/opa/resources/363201342213441988148.pdf. Three days after the bombings, on April 18, the brothers carjacked a vehicle and fled to Watertown, Massachusetts, west of Boston. On April 19, Boston police and SWAT team members found Dzhokhar Tsarnaev hiding in an upturned boat in a backyard at 67 Franklin Street, Watertown. After a gunfight that killed Tamerlan and injured Dzhokhar, Dzhokhar was arrested and brought in for questioning.“United States of America v. Dzhokhar A. Tsarnaev a/k/a/ ‘Jahar Tsarni,’” United States District Court for the District of Massachusetts, June 27, 2013, http://www.justice.gov/sites/default/files/usao-ma/legacy/2013/06/27/Indictment1.pdf.

Dzhokhar Tsarnaev was charged with 30 counts and pleaded not guilty to all of them. On April 8, 2015, he was found guilty on all 30 charges including causing death by use of a weapon of mass destruction. The following month, he was sentenced to death by lethal injection. The day after his conviction, he was transferred to a maximum security prison near Florence, Colorado. During his trial, Tsarnaev’s defense lawyers suggested he was heavily influenced by his older brother Tamarlan and therefore less responsible for the bombings.Patricia Wen and Milton J. Valencia, “Tsarnaev defense keeps focusing on brother’s influence,” Boston Globe, April 28, 2015, https://www.bostonglobe.com/metro/2015/04/28/defense-continues-push-for-life-prison-for-tsarnaev-boston-marathon-bomber/GFWPFfPF8PD293g4F6aH7M/story.html.

An ethnic Chechen, Tsarnaev was born in the northern Kyrgyz town of Tokmok near the Khazak border. His family fled to Dagestan following the Russian invasion of Chechnya in 1999. His family was also prompted to flee following the purge of Chechens from the Kyrgyz government, which caused his father to lose his job.Janet Reitman, “Jahar’s World,” Rolling Stone, July 17, 2013, http://www.rollingstone.com/culture/news/jahars-world-20130717. Tsarnaev arrived in the United States as a child in 2002, and lived in Massachusetts.Lara Jakes, Matt Apuzzo, and Rodrique Ngowi, “Officials: Suspect described plot before Miranda,” Associated Press, April 25, 2013, http://bigstory.ap.org/article/lawmakers-ask-who-knew-what-about-bomb-suspect. In high school, Tsarnaev was “as American as they come,” became wrestling team captain, and “partied hard and studied when he had to,” according to the Washington Post.Marc Fisher, “The Tsarnaev family: A faded portrait of an immigrant’s American dream,” Washington Post, April 27, 2013, http://www.washingtonpost.com/sf/feature/wp/2013/04/27/the-tsarnaev-family-a-faded-portrait-of-an-immigrants-american-dream/. He became a naturalized U.S. citizen on September 11, 2012.Janet Reitman, “Jahar’s World,” Rolling Stone, July 17, 2013, http://www.rollingstone.com/culture/news/jahars-world-20130717.

Tsarnaev was inspired to murder in part by the Yemeni-American Islamist preacher Anwar al-Awlaki.Patricia Wen, “Tsarnaev posted radical messages on second Twitter account, FBI agent testifies,” Boston Globe, March 10, 2015, https://www.bostonglobe.com/metro/2015/03/09/tsarnaev-had-second-secret-twitter-account-witness-testifies/lgiJqqmXlD3ua8HmFLnAZO/story.html. Al-Awlaki—the former director of external operations for al-Qaeda in the Arabian Peninsula (AQAP)—was assassinated in a U.S. drone strike on the orders of President Obama in 2011. Tsarnaev exhorted friends via Twitter to listen to Anwar al-Awlaki’s sermons. Tsarnaev downloaded al-Awlaki-authored and -inspired materials, including a copy of a book entitled “The Slicing Sword Against The One Who Forms Allegiances With The Disbelievers And Takes Them As Supporters Instead Of Allah, His Messenger And The Believers,” which contains a foreword by al-Awlaki. He also downloaded Volume One of AQAP’s magazine Inspire, which contains instructions on how to construct a bomb. Just three weeks before the Boston bombings, he tweeted, “Listen to Anwar al-Awlaki’s ... here after series… you will gain an unbelievable amount of knowledge.” YouTube videos of al-Awlaki were found on Dzhokhar and Tamerlan’s electronic devices.Scott Shane, “The Lessons of Anwar al-Awlaki,” New York Times, August 27, 2015, http://www.nytimes.com/2015/08/30/magazine/the-lessons-of-anwar-al-awlaki.html?_r=1;
Ann O’Neill, “The 13th Juror: The radicalization of Dzhokhar Tsarnaev,” CNN, March 30, 2015, http://www.cnn.com/2015/03/27/us/tsarnaev-13th-juror-jahar-radicalization/;
“United States of America v. Dzhokhar A. Tsarnaev a/k/a/ ‘Jahar Tsarni,’” United States District Court for the District of Massachusetts, June 27, 2013, http://www.justice.gov/sites/default/files/usao-ma/legacy/2013/06/27/Indictment1.pdf.

In December 2015, after Tsarnaev’s death sentence was confirmed, his lawyers argued for a re-trial and new sentencing. They argued that his older brother Tamerlan was the mastermind of the bombing, and that it was unfair to hold the trial in Boston because the jury could not be impartial. Tsarnaev is presently held at the Supermax prison in Colorado.Associated Press, “Boston Marathon bomber’s lawyers urge judge to grant new trial,” Guardian (London), December 1, 2015, http://www.theguardian.com/us-news/2015/dec/01/boston-marathon-bomber-dzhokhar-tsarnaev-lawyers-new-trial. In June 2016, al-Qaeda leader Ayman al-Zawahiri warned of the “gravest of consequences” for the United States if Tsarnaev, or any other Muslim prisoner in U.S. custody, is harmed.Alan Yuhas, “Al-Qaida leader: 'grave consequences' for US if Boston bomber executed,” Guardian (London), July 1, 2016, https://www.theguardian.com/world/2016/jul/01/al-qaida-boston-marathon-bomber-tsarnaev-execution. On July 31, 2020, Boston’s 1st U.S. Circuit Court of Appeals upheld 27 of Tsarnaev’s convictions but overturned the death sentence on the grounds that the presiding judge had inaccurately screened jurors for potential bias. The court also called for a new penalty phase trial to weigh a death sentence.Alanna Durkin Richer, “Court overturns Boston Marathon bomber’s death sentence,” Associated Press, July 31, 2020, https://apnews.com/article/dzhokhar-tsarnaev-trials-boston-marathon-bombing-ap-top-news-bombings-af38a703ab88fe922629dcc254cb41df. In October 2020, the U.S. Department of Justice asked the Supreme Court to reinstate Tsarnaev’s death sentence.Justine Coleman, “DOJ asks Supreme Court to reinstate death penalty for Boston Marathon bomber,” Hill, October 7, 2020, https://thehill.com/regulation/court-battles/519944-doj-asks-supreme-court-to-reinstate-death-penalty-for-boston. Lawyers for Tsarnaev have asked the Supreme Court to deny the request.Travis Anderson, “Lawyers for Boston Marathon bomber ask Supreme Court to deny government request to review appellate ruling tossing death penalty,” Boston Globe, December 17, 2020, https://www.bostonglobe.com/2020/12/17/metro/lawyers-boston-marathon-bomber-ask-supreme-court-deny-government-request-review-appellate-ruling-tossing-death-penalty/.

On January 4, 2021, Tsarnaev filed a $250,000 lawsuit against the U.S. government alleging “unlawful, unreasonable and discriminatory” treatment. In the suit, Tsarnaev complained that he had been limited to three showers a week. He also claimed prison guards had confiscated a baseball hat and bandana he purchased in the prison commissary because they thought he was disrespecting the FBI and victims of the Boston Marathon bombing by wearing them. According to the suit, Tsarnaev’s treatment is contributing to his “mental and physical decline.”“Boston Marathon bomber sues over ballcap, showers in prison,” Associated Press, January 7, 2021, https://apnews.com/article/boston-lawsuits-dzhokhar-tsarnaev-6291406e4d86d029ae5b4d28d8cde16c.