(New York, N.Y.) — The Counter Extremism Project (CEP) reports weekly on the methods used by extremists to exploit the Internet and social media platforms to recruit followers and incite violence. Telegram removed a channel for the neo-Nazi group the Base, however, a new channel was created the same day. Also on Telegram, channels affiliated with the Rise Above Movement (RAM) inspired active club movement celebrated and shared details about an MMA event held near San Diego earlier this month.

On Facebook, CEP researchers located 10 pro-ISIS accounts which posted a variety of propaganda and content. Additionally on Instagram CEP found five profiles that posted a variety of extreme right-wing content with one of the profiles having almost 600 followers. Finally, al-Qaeda released a message through the terrorist group’s official media wing, as-Sahab, condemning President Biden’s July trip to Saudi Arabia.

Telegram Channel for Neo-Nazi Group The Base is Removed, Returns to the Platform

On August 18, Telegram removed a channel for the neo-Nazi group The Base, however, a new channel was created the same day and remained online. A backup channel was also not removed from the communications platform. At least two Telegram channels previously used by the group in 2020 were either deleted by their users or removed from the platform.

Telegram channels affiliated with the Rise Above Movement (RAM) inspired active club movement celebrated an inaugural invite-only MMA event allegedly held in the San Diego area on August 20. The event, “Birth of a New Frontier,” consisted of individuals from various active club chapters and the group Patriot Front sparring in MMA bouts while being documented by a RAM/active club-linked media group.

A two-minute trailer advertising a future propaganda video based on the event was located on YouTube, where it received over 500 views in less than 24 hours. The event was also celebrated by posters on 4chan, who stated that this was an opportunity to join a real-world movement.

Photos from the event showed several dozen individuals in attendance in a converted warehouse. In a post, a Telegram channel claimed that 150 people attended. In a chat on the same platform, a self-identified member of an active club chapter who claimed to have attended the event stated that the plan was for active club-affiliated MMA events to be held twice a year.

The active club movement has sought to appeal to potential recruits through self-improvement, physical fitness, and combat sports. The movement aims to build a white supremacist counterculture based on a “clean” physically fit MMA-inspired aesthetic. RAM co-founder Robert Rundo stated in a blog post in March that active clubs should recruit at seemingly “apolitical” events, including MMA and other sporting events and gyms. The movement is also inspired by similar European groups that have sought to recruit through the promotion of combat sports combined with extreme right ideology. Rundo and other members of RAM participated in extreme right-affiliated MMA events while traveling in Europe in 2018 in Germany and Ukraine and made connections with European extreme right-wing groups in several countries.

An online clothing store affiliated with Rundo and the active club movement advertised the sale of branded boxing gloves on August 23, which quickly sold out. The site used a photo from the August 20 MMA tournament to promote the gloves.

Two of the Facebook accounts, one with 910 friends and the other with 130 followers, used a photo of the French ISIS fighter Abu Osama al-Faransi as their profile photo. Abu Osama appeared in the notable November 2014 ISIS video “What Are You Waiting For?” where he called for French Muslims to travel to join ISIS in Syria, and another speaker called for attacks in France. 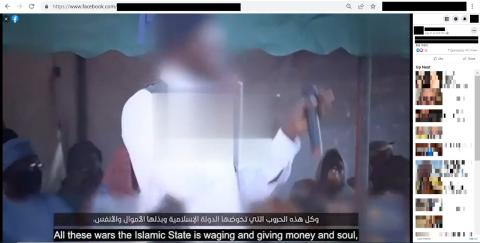 ISIS video “A Book That Guides And A Sword That Gives Victory,” on Facebook on August 24, 29 days after it was uploaded. The video was modified by the uploader in order to prevent it from being detected and removed. Logos on the top right of the video were removed and parts of the video were blurred.

On July 27, one of the accounts posted a propaganda video, “A Book That Guides And A Sword That Gives Victory,” released on June 14, 2022. Twenty-nine days later, the video had amassed 422 views and 55 likes/reactions. The uploader modified the video to prevent it from being detected and removed, logos on the top right of the video were removed, and parts of the video were blurred. It is unclear why Facebook did not detect the video upon upload using robust hashing, which can account for minor edits in footage.

CEP reported the 10 accounts to Facebook on August 24. Five days later, all 10 accounts were still online.

In a sample of accounts located on Instagram on August 24, CEP researchers found five profiles that posted a variety of extreme right-wing content, including an image originally made by the Atomwaffen Division (AWD) promoting Holocaust denial and violence against Jews, posts containing anti-Muslim memes and memes promoting anti-government violence, white supremacist slogans, and a video featuring the Australian neo-Nazi Thomas Sewell. One of the five accounts, with 156 followers, belonged to a Slovenian white supremacist clothing brand that advertised t-shirts with neo-Nazi black sun logos. Another account for the Serbian eco-fascist group Eco Revolutionary Action had almost 600 followers and posted various propaganda photos and statements encouraging joining.

On August 25, al-Qaeda released a message via the group’s official media wing, as-Sahab, condemning President Biden’s July trip to Saudi Arabia. The three-page statement also denounced the possibility of future diplomatic relations between Saudi Arabia and Israel. It stated that the U.S. role in the world is uncertain after the withdrawals from Iraq and Afghanistan and that Middle Eastern states are searching for new alliances, hoping to include the U.S. and Israel. The communique was dated July 2022 and did not mention the July 31 killing of Ayman al-Zawahiri or potential new leadership. The message was the first released by as-Sahab since July 16.