(New York, N.Y.) – The Counter Extremism Project (CEP) reports weekly on the methods used by extremists to exploit the Internet and social media platforms to recruit followers and incite violence. Last week, ISIS released a new, hour-long video titled “To Be Absolved Before Your Lord 3” criticizing its rivals, including al-Qaeda and al-Shabaab and condemning the Muslim Brotherhood for trying to implement Islamic law through governing or legal structures. In addition, CEP researchers located a YouTube video advertising a pro-ISIS propaganda website.

Meanwhile, the Nordic Resistance Movement (NRM) praised German extreme right mixed martial arts (MMA) organizations in an essay on its website and offered their contact information. Also, a prominent neo-Nazi accelerationist Telegram channel spread instructions for the homemade production of a fully automatic submachine gun. The process includes both machining and 3D printing. The channel advised that the manufacture of the weapon is a felony.

On December 15, ISIS released a new video titled “To Be Absolved Before Your Lord 3” via the group’s self-proclaimed province in Somalia. The video, which is almost an hour-long, criticizes ISIS rivals, including al-Qaeda and al-Qaeda aligned al Shabaab. The video also condemns the Muslim Brotherhood for trying to implement Islamic law through governing or legal structures. The video mostly consists of interviews but includes some footage depicting combat and footage of alleged prisoners of ISIS in Somalia. 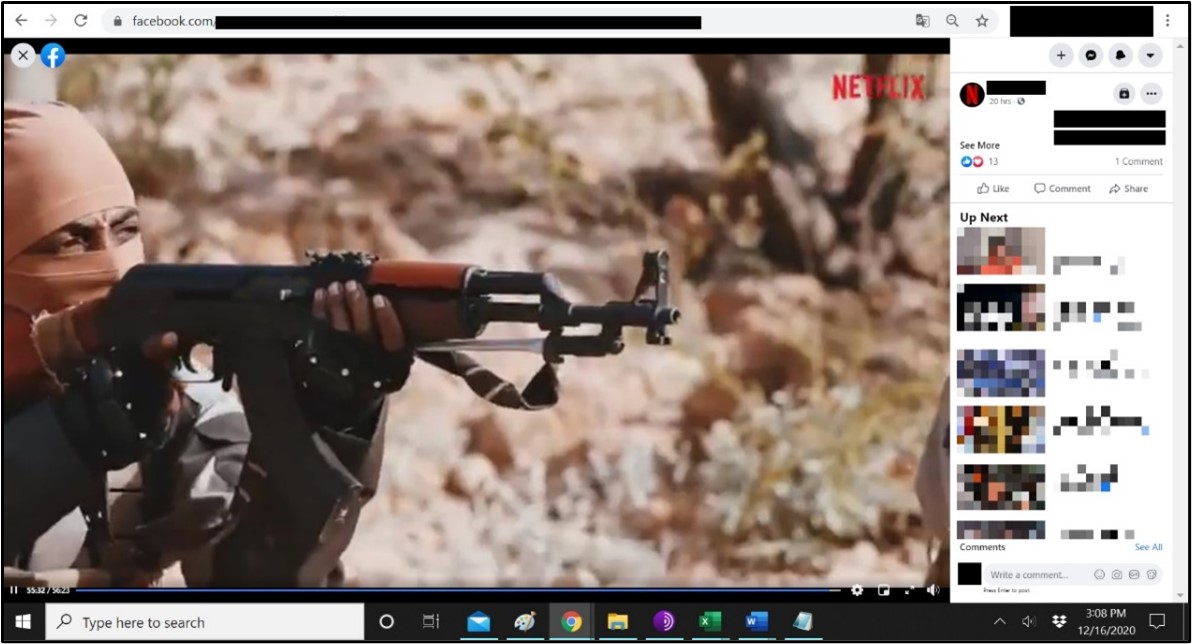 The ISIS video “To Be Absolved Before Your Lord 3” on Facebook, December 16, 2020. The video has a Netflix logo on the top right in order to elude detection.

The video was posted on Telegram and RocketChat, as well as several ISIS propaganda websites. Links were spread via RocketChat and Hoop. The video was posted on at least 13 websites: Facebook, pCloud, the Microsoft One Drive, the Internet Archive, Mail.Ru, File.Fm, Jwp.Io, Mega.Nz, Ok.Ru, PixelDrain, Dropbox, MediaFire, and NextCloud. Approximately 24 hours later, the video was still available on seven websites: Facebook, the Internet Archive, Mail.Ru, File.Fm, Jwp.Io, PixelDrain, and NextCloud. Pro-ISIS propagandists modified one of the versions uploaded to Facebook, adding a fake Netflix logo on the top right instead of ISIS iconography.

On December 17, CEP researchers located a YouTube video advertising a pro-ISIS propaganda website. The video, which was five seconds long, consisted of the header image taken from the website and an image advertising a recently released ISIS video. The website’s URL was also included in the video description. The video had over 20 views and was online for about two hours when CEP researchers located it. The video was still online two hours after it was reported and had garnered 13 more views.

The website advertised in the video, located on the .fun domain, has previously been removed from several domains, including .tf, .pk, .es., .pw, and at least four others. The website contains violent ISIS propaganda videos, the terror group’s weekly newsletters, and Amaq News updates. Videos on the website include recent ISIS releases and historical videos. The website has been changing domain names since at least March 2020.

In an essay on its website, the Nordic Resistance Movement (NRM) praised extreme right German mixed martial arts (MMA) organizations and offered their contact information. One of the groups listed, Körper & Geist, is connected to the neo-Nazi group Der Dritte Weg. One of the other entities listed, “Battle of the Nibelungs,” has been tied to the German extreme right, including to members of the Hammerskins and Combat 18. The event was banned in 2019 and 2020 by the German government. Another group promoted by NRM, Baltik Korps, is an extreme right-wing fight club that promotes the violent “Day X” concept of an anti-government and anti-immigrant uprising.

On December 16, a prominent neo-Nazi accelerationist Telegram channel spread instructions for the homemade production of a fully automatic submachine gun. The process includes both machining and 3D printing. The channel advised that the manufacture of the weapon is a felony. At least three different Telegram channels shared the files, and the post was viewed over 1,600 times within 24 hours. White supremacist Telegram channels that endorse violence have become increasingly interested in spreading information on the home manufacture of firearms, including using 3D printing.