Additionally, Al-Naba – a weekly newspaper published by ISIS – reported that the group executed six French aid workers in Niger while its Amaq News released a propaganda video on the RocketChat platform and at least 11 other websites allegedly displaying an attack using an improvised explosive device on an Iraqi army convoy in Anbar province.

Meanwhile, a link containing instructions for the 3D printing of a receiver for an AK style semi-automatic rifle was uploaded by at least five white supremacist-associated Telegram channels. Finally, CEP researchers identified that neo-Nazi books including neo-Nazi James Mason’s book, Siege, have been reuploaded to the print-on-demand web publisher, Lulu, which previously blocked sales in April and May 2020.

CEP researchers located multiple pieces of ISIS propaganda, including videos, photos, and text, on Facebook. The week of September 12 to September 18, a dozen accounts spreading ISIS propaganda were identified, including several full-length videos and clips with minor details modified, such as the covering ISIS symbols in the top right.

“Once again, Facebook has demonstrated it has serious gaps in enforcing standards on removing content that is incontrovertibly known to be extremist in nature. This instance is particularly egregious, given that several of the content identified are years-old ISIS propaganda videos,” said CEP researcher Joshua Fisher-Birch. “With the resources it has available, there is simply no excuse as to why Facebook allowed it to be uploaded in the first place. Facebook should clarify why numerous accounts were able to upload terrorist content, including slightly modified videos, and calls for violence.”

One of the videos, "A Message to the People of Kurdistan," was originally released in March 2015 and featured a Kurdish speaking man's execution. The video had been online for approximately two days when it was located, and had 79 likes/reacts, and over 100 comments. The ISIS flag and propaganda center logo on the top right were obscured in the video by a black circle.

Another video on Facebook, “Inside the Caliphate 8,” was originally released in October 2018, but was located on Facebook on September 17. The video had been uploaded over two weeks earlier and had 36 likes/reacts, and 10 comments. The video calls for ISIS supporters to commit attacks in their home countries and to post ISIS digital propaganda. The video contained a graphic making it appear as if it was recorded on a camcorder or camera. 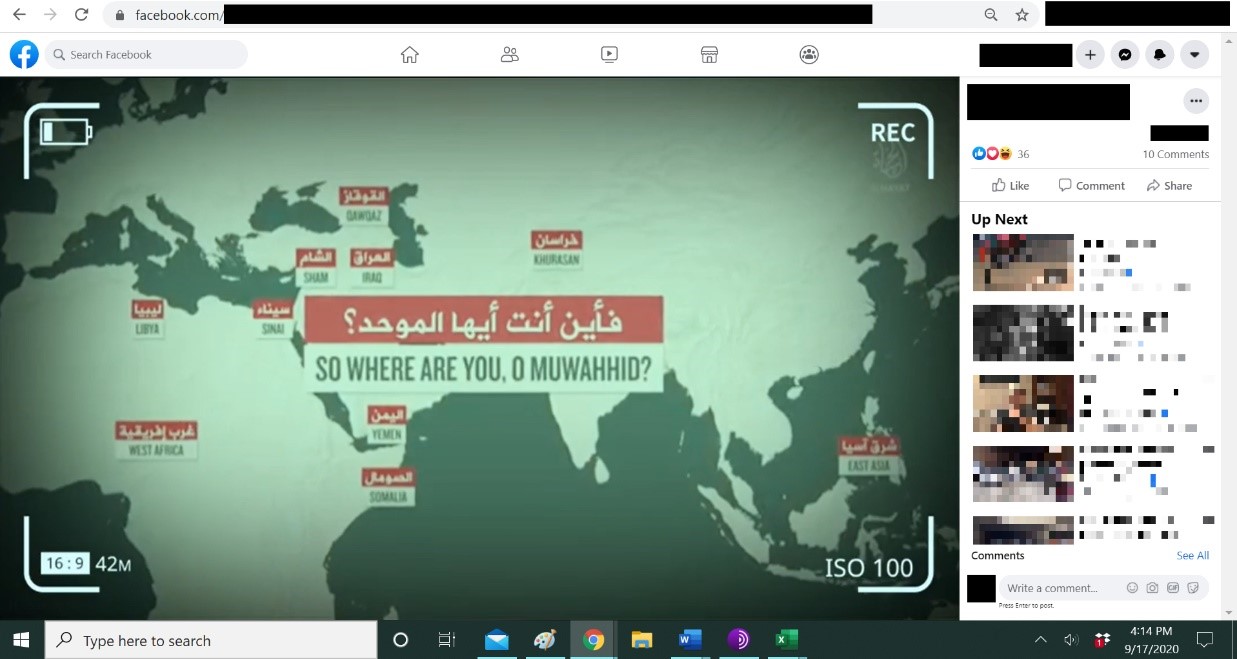 On September 17, ISIS claimed to have executed six French aid workers near Niger’s capital of Niamey, via the group’s Al-Naba weekly newspaper. The edition of Al-Naba was released on Telegram, RocketChat, Hoop, the Internet Archive, and Top4top.

On September 12, ISIS released an Amaq News propaganda video on multiple websites that allegedly shows an attack using an improvised explosive device on an Iraqi security forces convoy in Anbar province. The video was spread via the RocketChat platform and uploaded to at least 11 other websites, including: Pc.Cd, the Microsoft One Drive, the Internet Archive, File.Fm, Top4top, Mega.Nz, PixelDrain, SendVid, Streamable, Dropbox, and Mediafire. Five days later, the video was still available on seven websites: Pc.Cd, the Internet Archive, File.Fm, Top4top, PixelDrain, Streamable, and Mediafire.

On September 14, at least five white supremacist Telegram channels that endorse violence posted a link containing instructions for the 3D printing of a receiver for an AK style semi-automatic rifle. The receiver of a firearm is the necessary part of the weapon regulated by federal or state law. Various parts can be added to a receiver to make a functioning firearm. 3D printed firearms are unregistered and do not have serial numbers.

The website that contains the instructions for the 3D printed AK also sells “boogaloo” themed merchandise and has numerous embedded YouTube videos and files for the homemade 3D printing of firearms in order to get around firearms laws. There is no evidence that the website is aware that the white supremacist Telegram channels are sharing their content.

CEP researchers located James Mason’s book Siege on the website of print-on-demand publisher Lulu. The website previously blocked sales of the book in April 2019, May 2020, and early September 2020; however, it has been reuploaded and made available for purchase. Mason had substantial ties to the Atomwaffen Division, including an appearance in one of their recruitment videos, and his book Siege was required reading for the neo-Nazi accelerationist groups AWD and The Base.