(New York, N.Y.) – The Counter Extremism Project (CEP) reports weekly on the methods used by extremists to exploit the Internet and social media platforms to recruit followers and incite violence. Last week, ISIS supporters used a pro-ISIS RocketChat chatroom to celebrate and share a photo of the October 16 beheading attack on a French teacher in the Paris suburb of Conflans-Saint-Honorine. In addition, users of the 4chan politically incorrect board called for attacks on Muslims following the Paris area attack and posted a photo of the victim’s decapitated head.

Also, at least three white supremacist Telegraph channels shared a how-to guide which offered advice for social situations on how to meet new people and communicate for the purpose ot building networks. Additionally, CEP researchers located two pro-ISIS websites using Cloudfare services that contained videos, audio files, radio broadcasts, and newsletters from the group’s leadership. Meanwhile, the National Socialist Order (NSO), which claims to be the successor organization to the neo-Nazi Atomwaffen Division, released a video on a British based streaming platform, calling for their followers to locate “enemies” and “act,” suggesting the shooting of politicians, vehicular attacks on protestors, attacks on electrical infrastructure, and violent attacks against anti-fascist activists. Finally, CEP researchers located a copy of the October 9, 2019, Halle synagogue attack video on the Internet Archive as well as a Telegram channel offering pirated editing software for making propaganda.

Online ISIS supporters celebrated the October 16 beheading attack on a French teacher in the town of Conflans-Saint-Honorine, allegedly committed by a Moscow born Chechen man, identified as Abdoulakh Anzorov. The history teacher was murdered after reportedly showing his class caricatures of the Prophet Mohammad, leading to a backlash from parents. The attacker, who was killed by police, is not known to have any ties to students or the school. As of October 19, no terrorist groups have claimed responsibility. Users of a pro-ISIS RocketChat chatroom praised the attacker and shared a photo of the beheading.

Users of the 4chan politically incorrect board called for attacks on Muslims following the October 16 Conflans-Saint-Honorine beheading attack. 4chan users posted a photo of the victim’s decapitated head, called for violence against Muslims, and the deportation of Muslims from Europe.

A how-to guide for social situations was located on the Telegra.ph platform on October 13, posted by at least three white supremacist Telegram channels. The guide offers advice on how to meet new people, communicate, and establish interpersonal relationships. The guide is part of a strategy series on meeting people, convincing people to join the extreme right, and building an extremist movement. One of the guides advises that very close relationships allow for “direct action.” Administrators of two of the Telegram channels that posted the guide have previously spoken out against large groups made up of individuals previously unknown to one another, instead urging their audience to form small units with like-minded individuals to reduce the risk of infiltration from law enforcement or anti-fascist activists.

CEP researchers located two pro-ISIS websites the week of October 10 to October 16, both using Cloudflare services. The first site, on the .me domain, contains ISIS audio files, including radio broadcasts, official statements from the group’s leadership, and nasheeds.

The second website, on the .tf domain, has previously been removed from several domains, including .pl, .es, .pw, and at least four others. The website contains violent ISIS propaganda videos, the terror group’s weekly newsletters, and daily Amaq News updates. Videos on the website include recent ISIS releases as well as historical videos. The website has been changing domain names since at least March 2020. 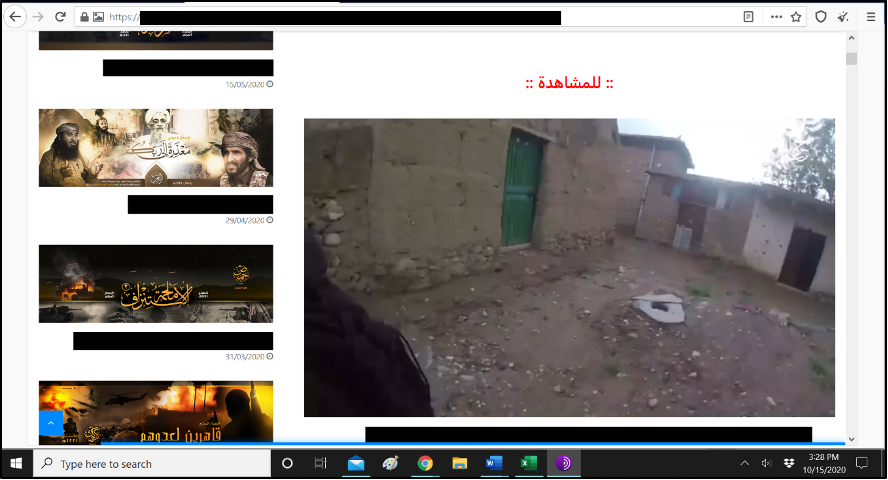 The National Socialist Order (NSO), which claims to be the successor organization to the neo-Nazi Atomwaffen Division (AWD), released a video on October 13, endorsing various violent acts. Specifically, the NSO video called for their followers to locate “enemies” and “act,” suggesting the shooting of politicians, vehicular attacks on protestors, attacks on electrical infrastructure, and violent attacks against anti-fascist activists. The video was posted to a British based streaming platform where it had approximately 300 views on October 15. The NSO announced its existence in July 2020, and flyers promoting the group have been pasted on businesses in Colorado Springs, Colorado.

On October 15, CEP researchers located a copy of the October 9, 2019, Halle synagogue attack video posted on the Internet Archive. The link was originally posted in a thread on an 8chan successor imageboard on the dark web, where users were celebrating the anniversary of the attack and sharing information on the neo-Nazi gunman’s trial. Stephen Balliet confessed to murdering two people during his attempted attack on a synagogue, which he streamed on Amazon-owned Twitch. The imageboard, which explicitly endorses fascism and white supremacist violence, was created in February 2019 to be more extreme than 8chan’s “politically incorrect” imageboard. The Internet Archive removed the file after CEP identified it.

CEP researchers located a Telegram channel offering pirated editing software for making propaganda. The channel had over 240 subscribers on October 15, however software files uploaded to the site had been viewed over 3,800 times in some cases. Downloads available on the channel included Adobe Photoshop and Adobe Illustrator.