(New York, N.Y.) – The Counter Extremism Project (CEP) reports weekly on the methods used by extremists to exploit the Internet and social media platforms to recruit followers and incite violence. Last week, ISIS released a new propaganda video from their self-proclaimed Sinai province titled “Bleeding Campaigns” depicting attacks with automatic weapons, snipers, and improvised explosive devices against the Egyptian armed forces. Additionally, the pro-ISIS propaganda group War and Media Agency released a video titled “The End and the Beginning” on multiple websites that offered a history of ISIS in Iraq and Syria and condemned anti-ISIS factions in both countries.

On Friday, January 8, ISIS released a new propaganda video from its self-proclaimed Sinai province titled “Bleeding Campaigns.” The footage shows attacks using automatic weapons, snipers, and improvised explosive devices against the Egyptian armed forces in Sinai. The video also includes footage of the beheading of a man accused of being an Israeli spy and the execution of individuals identified as members of the Egyptian security forces.

On January 2, the pro-ISIS propaganda group War and Media Agency released a video titled “The End and the Beginning” on multiple websites. The video, over an hour-long, offered a history of ISIS in Iraq and Syria. The video condemned anti-ISIS factions in both countries, and sought to refute the accusations that it has similarities to the early Islamic Kharijite sect.

The propaganda piece also sought to portray the terrorist group as frequently engaging in combat with the Syrian government. The video concluded with previously released footage of pledges of allegiance from different ISIS regional groups and a declaration that the terrorist organization will continue fighting.

The video made extensive use of previously released ISIS propaganda footage, including combat footage, clips taken from execution videos, and the October 2017 ambush of U.S. and Nigerien soldiers in Tongo Tongo. The video also included footage taken from news reports of the November 2020 Vienna attack by Kutjim Fejzulai.

Members of extreme right, white supremacist, and neo-Nazi groups and online communities praised the January 6 attack on the U.S. Capitol Building. Two official Proud Boys Telegram channels, belonging to the central organization and the group’s British chapter, posted statements and memes supporting the storming of the Capitol and denigrating racial justice movements. The group’s chairman, Enrique Tarrio, shared messages on Parler expressing his support for the attack, including urging those who entered the building to stay, stating that “When the people fear the government, there is tyranny, When the government fears the people, There is liberty.” At least one member of the Proud Boys was arrested by the FBI and is accused of participating in the violent mob that raided the Capitol Building.

A Telegram account belonging to the neo-Nazi group Nationalist Social Club (NSC) shared images of an individual displaying an NSC business card during protests outside of the Capitol. The same account also posted a photo of an alleged U.S. Capitol Police riot helmet with an NSC sticker to claim it as a trophy. It is unknown how the individual in the photo acquired the helmet. A Telegram account affiliated with the white supremacist Rise Above Movement encouraged their audience to attend the demonstrations at the Capitol, stating that it was an “opportunity,” and encouraged attacks against journalists.

Neo-Nazi accelerationist propaganda accounts on Telegram applauded the Capitol’s storming and urged additional future violence. One prominent Telegram channel with over 7,500 subscribers expressed hope that the events on January 6 would lead to spiraling violence and urged followers to commit acts to heighten tension and promote disorder. The same channel argued that insurrectionists’ ability to storm the Capitol proved that “police authority is a mirage.” A notorious neo-Nazi accelerationist Telegram channel with approximately 3,900 members urged terrorist attacks on infrastructure during the month of January and shared a post encouraging violence targeting politicians in their home states on January 20 while the country is preoccupied with the inauguration. The channel has been removed twice by Telegram, most recently in September 2020 after it encouraged attacks on law enforcement officers and Jews, but has returned to the communications app. Another important neo-Nazi accelerationist Telegram channel with over 7,300 subscribers advocated for attacks on police officers. A channel with approximately 1,900 subscribers stated that the events of January 6 were a significant victory for bringing about the collapse of the established order, but that future actions would have to occur in the “battle that is won day by day, hour by hour.” A channel that focuses on information and operations security stated that the attack on the Capitol Building would provide the neo-Nazi movement with additional recruits and urged their followers to keep up the momentum, promoting acts of terrorism and offering tips on operations security.

On January 5, CEP researchers located 11 white supremacist clothing companies that use Instagram to advertise merchandise. The accounts belonged to stores located in at least seven countries: the U.S., Serbia, Sweden, Australia, Ukraine, Germany, and the Czech Republic. The majority of the stores sell white supremacist or neo-Nazi themed streetwear and Mixed Martial Arts clothing. All of the Instagram accounts had links to external websites or Telegram accounts. 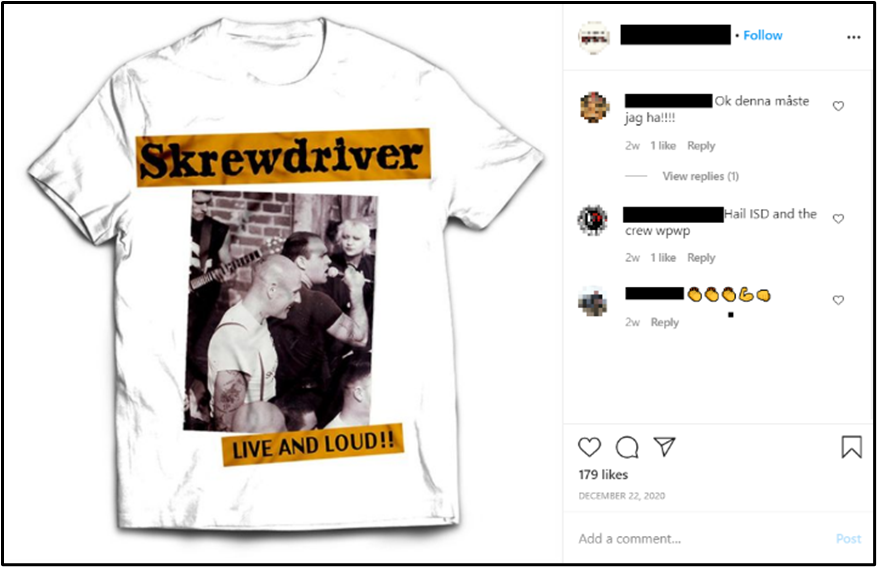 T-Shirt for the white supremacist band Skrewdriver advertised by a Swedish clothing and record distributor on Instagram.

On January 6, CEP researchers located a version of James Mason’s book Siege on the print-on-demand website Lulu. Lulu has removed copies of Siege at least four times, most recently in December 2020. Despite the repeated upload and removal of the neo-Nazi book, which encourages terrorism, Lulu does not proactively prevent its reupload. Lulu specifically prohibits material that encourages harm, threats, harassment, intimidation, or discrimination against people “based solely on race, ethnicity, national origin, sexual orientation, gender and gender identity, (or) religious affiliation.” Mason had substantial ties to the Atomwaffen Division, and his work appears on a website that features the writing of several of the group’s members. The book was reported to Lulu for violating their Content Policy as defined in their Terms and Conditions on January 6, however it was still online five days later.

“Government advisers on extremism have openly questioned the direction of the Home Office’s counter-terrorism progr… https://t.co/KXn5WOt2xl

During clashes in the occupied West Bank city of Jenin, Israeli security forces on Saturday shot and killed a 17-ye… https://t.co/eSxVB04spa