(New York, N.Y.) – The Counter Extremism Project (CEP) reports weekly on the methods used by extremists to exploit the Internet and social media platforms to recruit followers and incite violence. Last week, two Instagram accounts were found that posted content praising white supremacist murderers Dylann Roof and a member of the Atomwaffen Division. One account has existed for over a year. Both were reported to the platform as violations of its Community Guidelines, but has not been taken down.

Additionally, on the Internet Archive, CEP researchers identified discontinued ISIS magazines and pro-ISIS content encouraging terrorist attacks. On Telegram, a channel was found that posts information and advice on using explosives and improvised incendiary weapons. A video was also located on Telegram that showed a van disrupting a pro-Israel rally in Boca Raton, Florida, by driving by with neo-Nazi slogans on it in support of Hitler and antisemitism.

On May 12, CEP researchers located two Instagram accounts praising white supremacist murderers. The first account, which began posting content on April 25, 2020, was dedicated to Dylann Roof, who is currently awaiting execution for an attack that killed nine people at an African American church in June 2015. The Instagram account, which had 61 followers, posted photos and videos praising Roof. The second account used the name and photo of a member of the Atomwaffen Division (AWD) as a user icon and praised a murder by an AWD member in the profile description. Both accounts were reported to Instagram but were still accessible four days later.

CEP researchers located an extensive collection of discontinued online ISIS magazines and current pro-ISIS publications on the Internet Archive. In addition to ideological propaganda, the publications call for violence and contain information on using knives and committing vehicular attacks. The collection was uploaded on March 31, 2021, by an account that has also uploaded ISIS propaganda videos and has similarities with an account that has previously uploaded bomb-making information. The Internet Archive removed the magazines after CEP reported them.

Between May 8 and May 12, a white supremacist Telegram channel posted several videos that contained information and advice on using explosives and improvised incendiary weapons. The channel did not upload how-to manuals on building explosive devices but has previously posted information on converting firearms to fire on a fully automatic setting, 3D printed firearms plans, and white supremacist literature. The channel has advocated for violence against politicians and the government and has praised the perpetrator of the Oklahoma City Bombing, Timothy McVeigh.

The channel had over 900 subscribers on May 13, approximately one month after it became active. The channel administrator claims to have previously operated one of the most notorious neo-Nazi Telegram channels, which frequently called for violence and posted information on manufacturing weapons. Telegram removed that channel on January 14 after it had amassed over 5,100 followers. 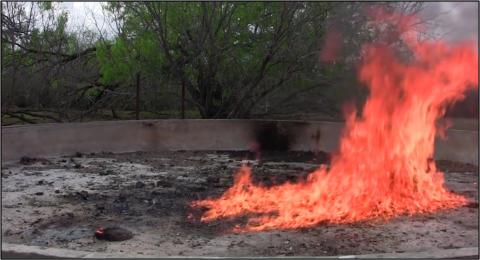 Image taken from a video regarding incendiary weapons posted on a white supremacist Telegram channel. Note that the video was not made by white supremacists, but was appropriated for the purpose of sharing information that could be useful for committing acts of violence.

On May 12, a neo-Nazi Telegram channel posted a video showing a van disrupting a pro-Israel rally in Boca Raton, Florida, by driving by with neo-Nazi slogans on it in support of Hitler and antisemitism. The video was viewed over 11,000 times and shared by at least eight other white supremacist Telegram channels. The group, the Goyim Defense League, is known for provoking Jews and participating in trolling behavior.

The week of May 9 to May 15, CEP researchers located four different uploads of the Christchurch attack video on the Internet Archive. All uploaded in 2021, the videos were added in January, February, and two in April and had 226 views, 43 views, ten, and four, respectively. The Christchurch terrorist, Brenton Tarrant, was sentenced to life in prison for murdering 51 people, injuring 40 others, and committing a crime of terrorism. CEP has repeatedly located versions of the attack video and content praising the attacker on the Internet Archive.