(New York, N.Y.) — The Counter Extremism Project (CEP) reports weekly on the methods used by extremists to exploit the Internet and social media platforms to recruit followers and incite violence. White supremacist and antisemitic content was located on Facebook and Instagram, including a storefront page on Facebook for neo-Nazi gear and another on Instagram that was used for recruitment and advocated for violent antisemitic attacks.

In addition, CEP identified a neo-Nazi Telegram account that released a Spanish language version of a book that explicitly calls for acts of violence, as well as another Telegram channel that promotes acts of terrorism and has been repeatedly deleted and re-uploaded. Additionally, a neo-Nazi Telegram channel shared information regarding the use of virtual credit cards in relation to privacy and operations security. Lastly, CEP identified a pro-ISIS propaganda site using an onion address on the dark web.

CEP researchers located a neo-Nazi online clothing store on Facebook and Instagram that sells white supremacist flags, skull masks, and t-shirts with neo-Nazi symbols. The store is either located in Portugal or Spain. The store created its Facebook page on April 12, 2021, and the Instagram page made its first post in May 2021. The clothing store was not removed after it was reported on both social media sites. 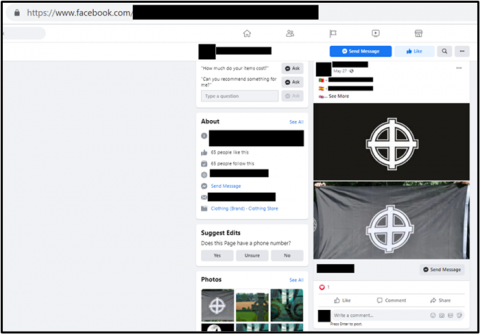 From June 27 to July 3, CEP researchers located content on Instagram that included recruitment for a small online neo-Nazi group and accounts that promoted violence against Jews. The account belonging to a small, accelerationist online group made posts starting on June 26 advertising their recruitment e-mail address, using neo-Nazi symbols, and advocating for violence against Jews. CEP also located an account that posted drawings of Jewish caricatures being shot with firearms, content promoting the great replacement theory, and the use of neo-Nazi symbols. The accounts were still online four days after they were reported by CEP.

On June 30, a Spanish language version of a neo-Nazi accelerationist book was released on Telegram. The PDF files were released on a private distribution Telegram page on June 30 that was created for the sole purpose of spreading the text. The files were also forwarded from a private channel, used as a repository, that did not have a publicly available link to join. While the private distribution channel was removed by Telegram within 24 hours, the Spanish language text was shared by at least thirteen different Telegram channels in the same period. The English language text has been shared by dozens of white supremacist and neo-Nazi Telegram channels and the message containing the files has received over 6,400 views, including potentially multiple views of the original message by the same user on different channels.

The text, over 130 pages, is heavily inspired by James Mason’s book Siege, “Terrorgram” Telegram channels that promote violence, and other works on guerilla warfare and terrorism. The book explicitly calls for acts of violence, including individual acts of white supremacist terrorism in the vein of Brenton Tarrant, Dylann Roof, and others. The authors also endorse attacks targeting law enforcement, Jews, people of color and attacks on infrastructure to weaken the government and social order. The book also included works of fiction and art and illustrations in several styles meant to appeal to young men on Telegram, imageboards, and other online forums.

On June 29, a prominent neo-Nazi Telegram channel dedicated to counter-surveillance and information and operations security shared information regarding the use of virtual credit cards. The online service, which a third-party company operates, allows users to create virtual cards to hide their credit card information or identity from online vendors. The Telegram channel had over 8,600 subscribers on July 1. The channel has previously endorsed violence and posted information on disabling and destroying surveillance cameras and removing microphones and cameras from smartphones.