In addition, the fourth issue of the pro-ISIS web magazine “Voice of Khurasan” was located on various platforms, and on RocketChat a pro-ISIS channel affiliated with the pro-ISIS tech group Qimam Electronic Foundation was identified by CEP. Finally, there was a video of a recent Q&A with American neo-Nazi James Mason uploaded on multiple Telegram channels.

On April 27, a Russian-language neo-Nazi Telegram channel posted a video showing how to make a detonator for explosive devices and a manual outlining the purchasing and storage of explosives components. The channel, created in September 2021, had over 200 subscribers on April 28. The channel has previously posted information on the manufacture and use of explosives, secure communication, and links to the Russian language audiobook of the Turner Diaries. Telegram removed the channel after CEP reported it, however Telegram did not take action against a private channel responsible for posting several pieces of featured content.

On April 27, neo-Nazis and white supremacists on Telegram celebrated the third anniversary of the Poway, California synagogue shooting, where a gunman murdered one person and injured three others. In a manifesto posted on 8chan before the attack, the perpetrator stated that he acted out of his hatred for Jews, referencing the great replacement conspiracy theory. Several days before the attack on Chabad of Poway, the gunman had attempted to burn down the Dar-ul-Arqam mosque in Escondido. The perpetrator was sentenced to life in prison plus 30 years for 113 charges, including murder, attempted murder, obstruction of free exercise of religious beliefs, violating the Church Arson Prevention Act, and firearms crimes.

At least 14 different Telegram channels posted content praising the gunman and encouraging additional antisemitic violence. Multiple channels published his manifesto and music that glorified the gunman. In one channel, commenters posted advice regarding how the gunman could have murdered more people. 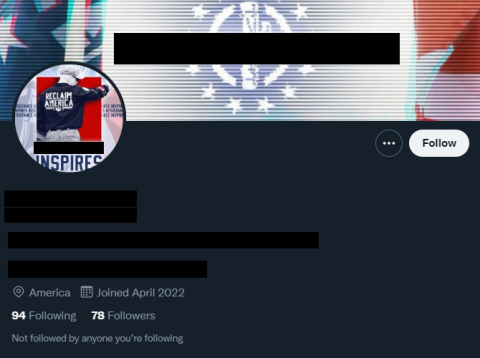 On April 23, the fourth issue of the pro-ISIS web magazine “Voice of Khurasan” was released online. The first article emphasized that fighting and immigrating to ISIS-held areas is mandatory. The second article warned readers that they would be repeatedly tested but that if they were able to endure the many hardships facing them, their patience would pay off, and victory would be assured. The article emphasized that difficulties are meant to separate the pure from the impure.

The magazine also contained an editorial that originally appeared in al-Naba issue 33, released in 2016, which emphasized that fighting was mandatory and that ISIS remained strong even after being attacked by the U.S and would ultimately be victorious. The web magazine also included statistics regarding ISIS Khorasan Province attacks for the month of Shaban (March 4 to April 1), during which the group claimed to have committed 18 attacks in Afghanistan and three regions in Pakistan, resulting in the alleged deaths of 285 civilians, 22 Taliban soldiers, one individual accused of being a spy for the Haqqani network, and 37 Pakistani soldiers.

CEP researchers located a post on a pro-ISIS RocketChat channel from the pro-ISIS tech group Qimam Electronic Foundation warning users about the potential malware vulnerabilities of some Lenovo computers. The post, originally made on April 22 on a different bulletin board-style website, urged users to update their firmware.

Between April 23 and April 28, multiple Telegram channels posted a video of an April 20 live-streamed Q&A with the American neo-Nazi James Mason. The live stream was conducted by a Telegram channel affiliated with a website that supports Mason’s work and endorses the National Socialist Order. The same Telegram channel was removed from the platform on April 20, shortly after it live-streamed the Q&A after an unknown group or individual reported it. A replacement channel, created on April 21, was on Telegram for one week before Telegram removed it on April 28. A second replacement channel, that remained online, was also created on April 21.

After Telegram removed the primary distribution channel, an audio version taken from the video was posted on at least seven Telegram channels, and multiple video clips taken from the live stream were still available on several channels. The full video was also available on the second replacement channel. The video was also located on Bitchute and Odysee. Bitchute refused to remove the video after CEP reported it.

In the video, Mason encouraged his followers not to commit acts of violence and instead focus on spreading propaganda. Despite these pronouncements, Mason praised the German group National Socialist Underground, responsible for ten murders, two bombings, and multiple robberies, stating that their actions were “the only way to go when you are outlawed.” Mason also commended an American white supremacist serial killer executed in 2013 and suspected of over 20 murders. Mason proclaimed that the country is accelerating towards collapse without involvement from the extreme right.