In addition, a podcast dedicated to Roof released an almost two-hour long episode on June 17. The podcasters opened by stating that the current protests in the U.S would ultimately create a white backlash which would lead to “the beginning of balkanization” and an eventual white supremacist victory. The podcasters glorified Roof and his murder of nine people at Emanuel AME. One of the hosts stated that white supremacist mass murderers were heroes and that mass violence would continue, blaming Jews, people of color, and non-supremacist whites for the violence. The podcast hosts operate a Telegram channel which has approximately 1,800 subscribers. The podcast was spread on Telegram and CatBox, which previously hosted several video files of the March 15, 2019 Christchurch terrorist attack.

CEP researchers located two Amaq videos the week of June 13 to June 19. The first video was originally released on June 11 and showed ISIS terrorists executing two men with rifles near Maiduguri in Nigeria, claiming they were a police officer and a soldier. Links to the video were spread via the RocketChat platform. The video was uploaded to at least eight websites: File.Fm, Streamable, Pixel Drain, Top4top, Mediafire, the Microsoft One Drive, the Internet Archive, and Mega.Nz. Approximately seven days after they were uploaded, the video was still available on Mediafire and the Internet Archive.

The second video, released on June 16, claims to show ISIS fighters in Nigeria attacking the village of Mungono. ISIS fighters can be seen firing mortars, entering a village, and burning military vehicles. Links for the video were spread on Hoop and RocketChat. The video was uploaded to at least 12 websites: Mediafire, the Microsoft One Drive, the Internet Archive, Mega.Nz, File.Fm, Tune.Pk, Yadi.Sk, Pixel Drain, Top4top, Streamable, Dropbox, and Mail.Ru. Approximately two days later, the video was still available on five websites: Mediafire, the Internet Archive, Tune.Pk, Top4top, and Mail.Ru. 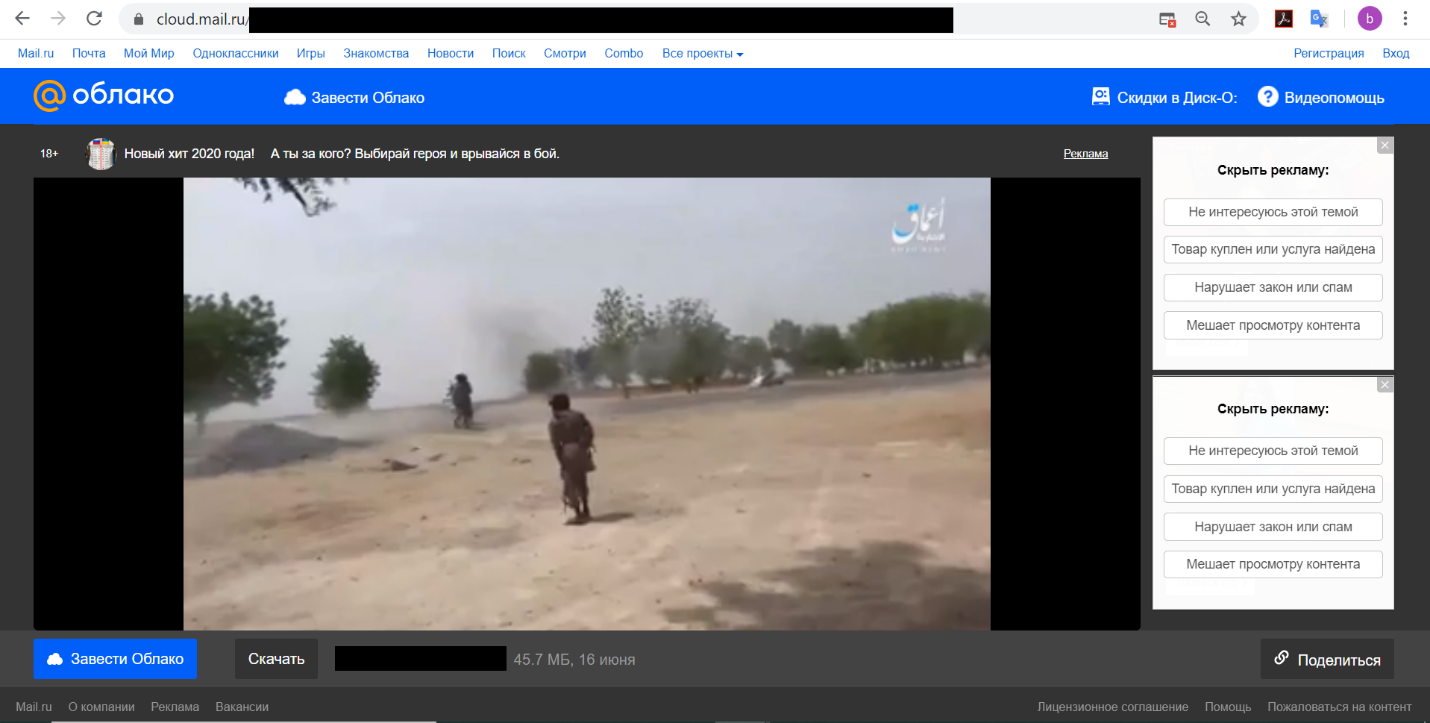 ISIS Amaq video on Mail.Ru, approximately two days after it was uploaded. June 18, 2020.

The week of June 13 to June 19, CEP researchers located a Telegram channel claiming to represent the Atomwaffen Division (AWD) in Brazil. The channel has posted AWD propaganda translated into Portuguese, and contains a recruitment email address on the Tutanota secure email site.

Individuals claiming to be from Brazil have previously expressed interest in Siege inspired neo-Nazi accelerationism. A Telegram channel claiming to be Brazilian and part of a network of extreme neo-Nazi Telegram channels was active between April 2019 and January 2020. The channel posted photos and short videos purporting to feature members of the Sonnenkrieg Division (SKD) in Brazil, and Portuguese SKD propaganda allegedly posted in southern Brazil. Several users of the now defunct web forum Fascist Forge claimed to be located in Brazil. Fascist Forge offered neo-Nazi and fascist propaganda, and users discussed lone actor terrorism, assassinations, and organized sexual violence.

AWD in the U.S. claimed to have disbanded in March 2020. It is unclear what relationship if any groups claiming to be AWD outside of North America have with the U.S. group or its members. In December 2019, a group in Ukraine claimed to be a chapter of AWD, however they were disavowed and condemned by the American organization. In late May 2020, a group using the AWD name claiming to be in Russia emerged. It is likely that local groups have adopted AWD propaganda, ideology, and aesthetics, without having any connection to the U.S. group.

Several former AWD members have recently had their work featured on a new website dedicated to James Mason. The website claims no affiliation with AWD. On June 17, the site added a “Prisoner of War” section listing the prison addresses of four AWD members, and requested that individuals send them “letters, books, or money” while warning readers to avoid discussing anything related to their cases, or anything that could be used as evidence against the letter writer.

On Monday, June 15, a white supremacist Telegram channel that has previously endorsed violence shared a Tweet containing information on making homemade 9mm ammunition using spent shell casings. The files are originally from an individual who creates and distributes plans and information on the 3D printing of firearms and is unconnected to the white supremacist movement. One of the main obstacles to the use of a non-regulated 3D printed firearm is that ammunition must be made or acquired. The Telegram message that shard the Tweet had been viewed over 5,000 times in approximately 72 hours, and was shared by 14 additional Telegram channels, including those that have previously endorsed acts of terrorism.

On June 16, a user of an 8chan successor website located on both the surface and dark web suggested that individuals commit false flag property attacks against local politicians in order to turn them against anti-police brutality protests. The poster lamented that many mayors support the protests but that if their homes were vandalized in a way that would lead one to believe that “antifa” or Black Lives Matter protestors were the culprits, their support would fade.