YouTube is allowing a propaganda channel linked to the white supremacist Rise Above Movement (RAM) to operate on their platform, in a glaring example of how the popular video streaming site is failing to confront right-wing extremism. The channel contains videos featuring RAM’s co-founder Robert Rundo offering advice on street fighting, creating and dispersing propaganda, promoting the white supremacist movement, and a variety of other topics. The media group that created the channel uses RAM’s logo and seeks to cover international extreme right news and culture.

The YouTube channel was created on June 19, 2020, and had 12 videos on October 14, averaging approximately 1,560 views per video. The channel contains the media group’s contact information and links to the media group’s website and cryptocurrency donation page. 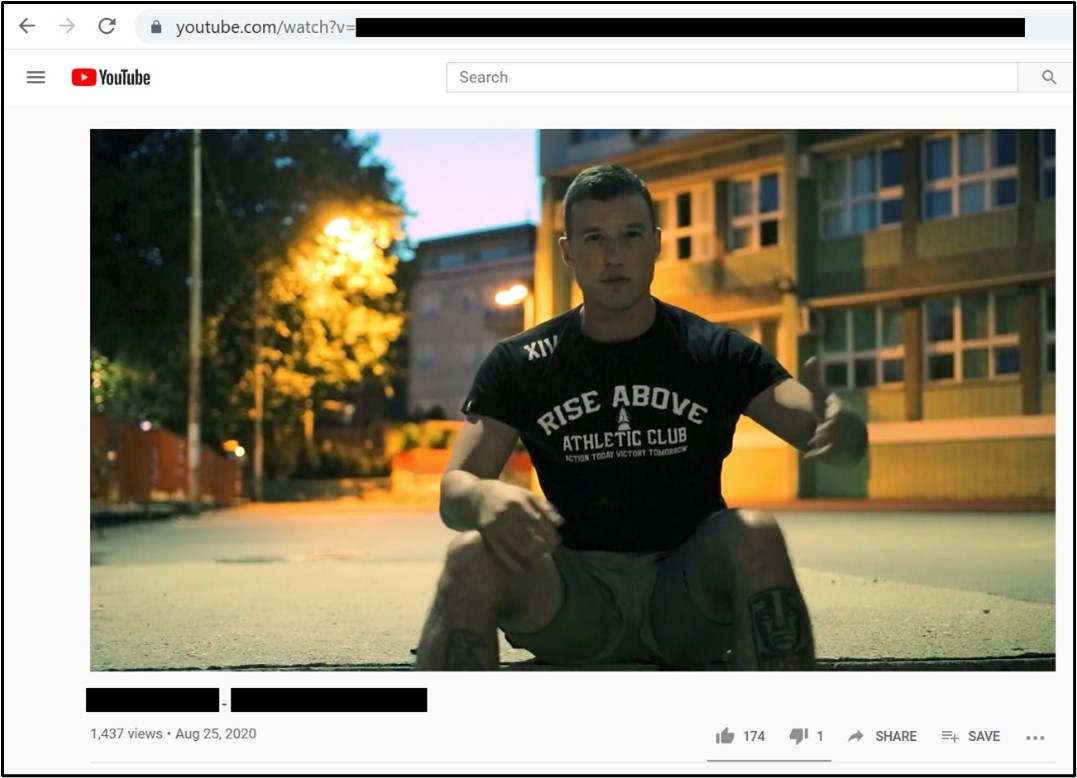 YouTube has been inconsistent in its removal of RAM related content. Despite the platform’s June 2019 announcement on removing white supremacist videos, the Anti-Defamation League (ADL) found RAM content in August 2019. YouTube removed a video associated with the same RAM-affiliated media group on June 24 for violating the site’s hate speech policies. However, additional reported videos were not removed, despite sharing the same external links and iconography as the deleted video.

Rundo has even joked about the group’s ability to post content, stating that he would use coded terminology to refer to racial groups because “I don’t want to get my videos from YouTube taken down yet.” This strategy follows RAM’s previous attempts to modify their appearance and message to widen their appeal. According to the Los Angeles Times, RAM co-founder Ben Daley told a prospective member to abandon the white power skinhead image, stating that “its (sic) time to reimagine the nationalist look and playbook, we have become predictable that needs to change.”

YouTube’s Community Guidelines prohibits hate speech, “content produced by violent criminal or terrorist organizations,” and “content that depicts the insignia, logos, or symbols of violent criminal or terrorist organizations in order to praise or promote them.” The channel in question violates all three of the tech giant’s guidelines. In one video, Rundo stated, “Your skin is your uniform, bro, trust me when you have ten white guys just walking together this is a statement right here.” Four RAM members have previously pled guilty to conspiracy to riot charges related to violent acts at demonstrations in California and at the August 2017 “Unite the Right” rally in Charlottesville, Virginia. Three of the four were handed  prison sentences of 37 months, 33 months, and 27 months, respectively, with the fourth currently awaiting sentencing. The U.S. Department of Justice noted that RAM members used the Internet to “post statements, photographs, and videos of the assaults committed by RAM members…to recruit members to engage in violent confrontations at future events.” RAM logos and iconography are all over the YouTube channel, from t-shirts worn by Rundo to the media group’s emblem.

The YouTube channel’s existence also shows the importance of the platform for propaganda purposes. A channel containing similar RAM propaganda exists on BitChute, where it has 145 subscribers, compared to the 907 subscribers for the YouTube page. The same pro-RAM video posted within a day of each other on BitChute and YouTube had drastically different views, with 690 views and 2,042 views, respectively, on October 14. Additionally, while the videos on BitChute have no comments, the YouTube videos average 31 comments each. YouTube comments included individuals hoping to join RAM or their affiliated media project and individuals who offered advice on fighting and spreading propaganda.

The RAM media group’s channel is illustrative of YouTube’s ineffective approach towards white supremacist extremists. YouTube should once again enforce their terms of service and stop a violent white supremacist group from using their platform to network and spread propaganda.

Half Measures to Remove Neo-Nazi Telegram Channels Do Not Work

Many people do [believe] that it is a terrorist state, and who would possibly be a friend of Israel after you see the carnage that they carried out against Muslims in the West Bank and Gaza Strip and continue to do with the appropriation of properties? No one in their right and rational mind would support such a state [Israel].

RT @Reuters: The U.S. intelligence community has assessed that Islamic State in Afghanistan could have the capability to attack the United…

RT @jseldin: More info on Abdul Hamid al-Matar, the senior #alQaida #HurraslaDin leader killed in a US drone strike on Oct 22 "He was spec…

Kidnapped by Boko Haram and married to one of the group’s commanders. Why did Aisha Yerima return to the terror gro… https://t.co/v5Fe8xHYhs

In Edinburgh, a man accused of planning an attack on a Glenrothes mosque stands trial. The court heard that he alle… https://t.co/TvxpTFht3s