Modern antisemitism is a repackaging of historic tropes. Antisemites have adapted conspiracy theories of the blood libel as well as Jewish influence in economic and governmental affairs to fit new circumstances, such as the accusation that Jews are responsible for spreading COVID-19, just as Jews were accused of spreading the plague a millennium ago.

Jews have historically been denied political and economic rights, and modern antisemitism is an expression of the rejection of Jewish integration into society. While the twentieth century saw the rise of influential Jewish politicians around the world as well as the creation of the Jewish nation-state of Israel, conspiracy theorists continue to accuse Jews of dual loyalties and exerting too much influence in world affairs. Partisan politicians are also increasingly willing to incorporate antisemitic tropes into their rhetoric to attack opponents they view as serving other interests.

Blatantly antisemitic historical legal restrictions on Jewish life have evolved into modern laws restricting basic tenets of Jewish life—e.g., kosher slaughter and circumcision—with support from both the left and the right, who argue they are protecting animal and children’s rights. These laws largely do not specifically target Jews but still have the effect of restricting Jewish practice.

Since the tragic shooting deaths at Pittsburgh’s Tree of Life synagogue in October 2018, the media and commentators have noted an increasing number of antisemitic attacks and the emergence of what many are calling the new antisemitism. While modern communication technologies and globalization have created new outlets for antisemitism, the new antisemitism looks remarkably familiar. Classic anti-Semitic tropes and conspiracy theories are being repurposed and even finding their way into mainstream political discourse. Rather than being a new type of antisemitism, this is more of a resurgence of classic antisemitism in new clothing. This report explores the types of antisemitism embraced by the far right, the far left, radical Islam, and in politics. It will also examine the common core of antisemitism as practiced by these groups.

In the first half of 2021, antisemitic attacks rose in conjunction with protests against Israel. That May, Israel and Hamas fought an 11-day conflict during which Hamas and Palestinian Islamic Jihad launched more than 4,000 rockets toward Israeli population centers, killing 12 people. Israel launched airstrikes at Hamas and PIJ targets across the Gaza Strip, killing at least 243 Palestinians, according to the Hamas-run health ministry. The Israeli government claims it killed at least 200 militants from Hamas and PIJ.*Fares Akram and Joseph Krauss, “Palestinians see victory in Gaza truce as Israel warns Hamas,” Associated Press, May 21, 2021, https://apnews.com/article/africa-middle-east-israel-palestinian-conflict-health-coronavirus-pandemic-41d515a273b54187d429887a3ae9d9e8.x As the conflict wrought destruction across Gaza, anti-Israel rallies took place across the United States and the world—and Jews thousands of miles away from Israel found themselves under assault.

From the plague to the Great Depression to COVID-19, Jews have long been blamed for catastrophes. The emergence of wealthy Jews in Europe—particularly the Rothschilds—gave rise to the notion that Jews manipulate global events, which was later codified in The Protocols of the Learned Elders of Zion. More than a century since it first appeared in Russia, the Protocols remains a prominent source of antisemitic theories. The forgery has endured and has been repackaged and reinterpreted in a contemporary context. In 2002, for example, an Egyptian TV series drew international outrage for promoting the forgery. *Stephen Farrell and Issandr El Amrani, “Israel outraged by ‘anti Semitic’ TV drama,” The Times (London), November 15, 2002, https://www.thetimes.co.uk/article/israel-outraged-by-anti-semitic-tv-drama-8c6pxcsxvgx.x

Central to these examples is the idea of the Jew as the powerful puppet master and manipulator, which is rooted in the oldest antisemitic conspiracies. Early Christians blamed Jews for killing Jesus. Medieval rulers blamed Jews for spreading the plague. Jews were blamed for Russia’s communist revolution. Throughout history, Jews were portrayed as shadowy villains. And then The Protocols of the Learned Elders of Zion gave life to new conspiracies about Jewish power and the desire to manipulate and control world affairs. The emergence of a physical Jewish nation-state in 1948 provided antisemites with a centralized representation of Jewish power on the world stage. And while Jewish communities vary in their opinions on and support of Israel, in 2021 Israel’s fight against Hamas further highlighted the violent repercussions of the accusations that all Jews—merely by association—are responsible for the actions of Jewish state.

Conspiracies involving Jewish political power and influence are deeply rooted and influential. As shown in a 2018 CNN poll, one-third of Europeans think Jews are too politically powerful.*Richard Allen Greene, “CNN poll reveals depth of anti-Semitism in Europe,” CNN, November 2018, https://www.cnn.com/interactive/2018/11/europe/antisemitism-poll-2018-intl.x Conspiracies about the Rothschilds still abound but new Jewish faces have taken center stage. One of the most prominent Jews at the center of these new conspiracies is George Soros, the Hungarian Holocaust survivor who created a financial empire and is a strong supporter of liberal causes as well as the Democratic Party.

Soros has become a favorite target for the right and far right. Among the crimes blamed on Soros are being a Nazi collaborator,*Jamie White, “ROSEANNE IS RIGHT: GEORGE SOROS IS A NAZI COLLABORATOR,” InfoWars, May 29, 2018, https://www.infowars.com/roseanne-is-right-george-soros -is-a-nazi-collaborator/.x causing the 2008 financial crisis, and funding the migrant caravans that reached the U.S.-Mexican border in late 2018 and early 2019.*Adam Shaw, “Border apprehensions plunge as Trump administration hails Mexico pact,” Fox News, September 9, 2019, https://www.foxnews.com/politics/border-apprehensions-plunge-as-administration-hails-mexico-pact; John Wagner, “Trump says he ‘wouldn’t be surprised’ if unfounded conspiracy theory about George Soros funding caravan is true,” Washington Post, November 1, 2018, https://www.washingtonpost.com/politics/trump-wouldnt-be-surprised-if-democratic-megadonor-george-soros-is-funding-the-migrant-caravan/2018/11/01/9ea196a0-ddcf-11e8-85df-7a6b4d25cfbb_story.html.x 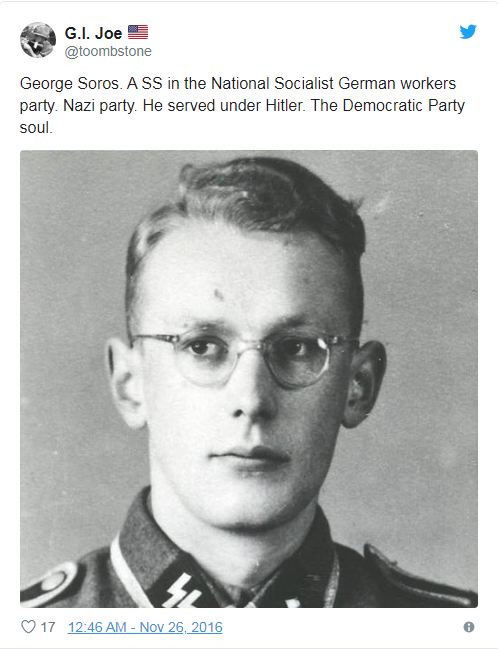 These claims anoint Soros the puppet master of a grand far-left conspiracy. Conspiracies circulate about how Soros survived the Holocaust, painting him as a Nazi collaborator who as a child aided Nazis in looting valuables from the dead bodies of Jews. Other theories have him enlisting in the SS. A 2016 tweet by the user @toombstone, for example, spread an image of a young man, allegedly Soros, in an SS uniform. A Google image search of the photo reveals the individual to be Oskar Groening, a Nazi guard at Auschwitz known as “the book-keeper of Auschwitz.”*“‘Auschwitz book-keeper’ Oskar Groening sentenced to four years,” BBC News, July 15, 2015, https://www.bbc.com/news/world-europe-33533264.x

Hundreds of years ago, European peasantry accused Jews of spreading the plague by poisoning the wells of Europe. As the world struggled to address the COVID-19 pandemic in 2020, Jews once again became a target of conspiracies. In the early days of the outbreak in the United States, an Orthodox Jewish attorney became Patient Zero in New York state, making the New York Jewish community among the first to contract and spread the virus.*Danielle Ziri, “N.Y. Governor Says Coronavirus Patient Zero Cured, Urges Jews to Celebrate Passover at Home,” Haaretz (Tel Aviv), March 29, 2020, https://www.haaretz.com/us-news/.premium-n-y-gov-says-coronavirus-patient-zero-cured-urges-jews-to-hold-passover-at-home-1.8722532.x Within the white supremacist sphere, accusations swirled that Jews were either directly responsible for the transmission of the virus or were holding back a cure to maximize profits.*Gareth Narunsky, “COVID-19 antisemitism reaches Australia,” Australian Jewish News, April 30, 2020, https://ajn.timesofisrael.com/covid-19-antisemitism-reaches-australia/; Rory Butler, “Coronavirus has sparked rise in anti-Semitism with Jews blamed for the spread of Covid-19,” Daily Mail (London), April 21, 2020, https://www.dailymail.co.uk/news/article-8240319/Coronavirus-sparked-rise-anti-Semitism-Jews-blamed-spread-Covid-19.html; Leila Ettachfini, “Orthodox Jews Were Blamed for Spreading COVID. Now They're Donating Plasma,” Vice, April 30, 2020, https://www.vice.com/en_us/article/pke7wg/orthodox-jews-were-blamed-for-spreading-covid-now-theyre-donating-plasma.x In one case in New York City, a couple attacked a group of Hasidic men, tried to rip off their facemasks, and shouted, “You’re the reason why we’re getting sick!”*Aaron Katersky and Ivan Pereira, “Couple arrested for hate crime in Brooklyn, allegedly blaming spread of COVID-19 on Jews: Police,” ABC News, May 11, 2020, https://abcnews.go.com/US/couple-arrested-hate-crime-brooklyn-allegedly-blaming-spread/story?id=70616958.x According to another conspiracy theory, a Soros-owned company created the coronavirus in a lab.*“Argentine journalist said the coronavirus was created by rich Americans and Israelis,” Jewish Telegraphic Agency, April 6, 2020, https://www.jta.org/quick-reads/argentinean-journalist-said-the-coronavirus-was-created-by-rich-americans-and-israelis; “Exploiting the Coronavirus for Anti-Israel Campaigns,” NGO Monitor, May 12, 2020, https://www.ngo-monitor.org/exploiting-the-coronavirus-for-anti-israel-campaigns/; David Mikkelson, “Does George Soros Own a Lab That ‘Developed’ COVID-19?,” Snopes, April 2, 2020, https://www.snopes.com/fact-check/soros-wuhan-lab/.x

The accusations all come from the same place: the notion that Jews wield outsized political influence and the ability to manipulate government policies. Resentment toward the Jewish emancipation of the nineteenth century and their emerging prosperity, as well as the migration of Russians into Europe, fed the spread of the fictitious Protocols throughout Europe in the last century. And while the Protocols itself may be relegated to the corners of far-right websites, antisemites have adapted the essence of its message for the modern era.

This report explores how those perceptions have shaped modern antisemitism, infected every aspect of modern life, and resulted in the highest record of antisemitic violence against Jews in years.

Historic professional, societal, and political restrictions on Jews helped give rise to some of the most enduring conspiracies about Jewish influence.

Read about Antisemitism throughout History