(New York, N.Y.) – The Counter Extremism Project (CEP) reports weekly on the methods used by extremists to exploit the Internet and social media platforms to recruit followers and incite violence. Last week, white supremacists and neo-Nazis on Telegram and dark web imageboards celebrated the second anniversary of the Poway, California synagogue shooting and called for additional violence against Jews. In addition, CEP researchers located approximately a dozen Instagram accounts that posted explicit neo-Nazi or antisemitic content, including an account that referenced the victim of a murder committed by a member of the Atomwaffen Division in the username. Additionally, a Telegram channel belonging to a neo-Nazi podcast returned to Telegram after being removed in January 2021.

Lastly, CEP researchers located three pro-ISIS websites, which posted content including official videos, news clips and reports containing a wide variety of ISIS propaganda. One of the websites was on the Google-owned Blogger platform.

On April 27, white supremacists and neo-Nazis celebrated the second anniversary of the Poway, California synagogue shooting. John Earnest, a former nursing student, has pleaded not guilty to 113 counts including murder, attempted murder, and violating the Matthew Shephard and James Byrd Jr. Hate Crimes Prevention Act, for his Christchurch-inspired attack that killed one person and wounded three others. Earnest has also been charged with arson as a hate crime for the March 24, 2019 fire at a mosque in Escondido, California.

In a manifesto posted on 8chan before the synagogue attack, Earnest is alleged to have stated that he acted out of his hatred for Jews, referencing the great replacement conspiracy theory.

At least two dozen white supremacist Telegram channels celebrated the anniversary of the attack by posting Earnest’s manifesto and drawings, photos, and videos of him, as well as calling for additional violence against Jews. Users of imageboards on the dark web also praised Earnest’s actions, with one user referring to him as the first “disciple” of Brenton Tarrant.

The week of April 25 to May 1, CEP researchers located approximately a dozen different accounts on Facebook-owned Instagram that posted explicit neo-Nazi or antisemitic content. Examples include video clips from the Atomwaffen Divison (AWD), footage from Nazi Germany with antisemitic text added, general antisemitic posts, and accounts with neo-Nazi symbols as profile photos, including black suns/sonnenrads and SS Totenkopfs. CEP researchers also located a white supremacist account that derogatorily referenced the victim of a murder committed by a member of AWD in the username. Instagram previously removed an account with a nearly identical name.The account was removed from Instagram after it was reported by CEP. None of the other accounts, were removed after they were reported. 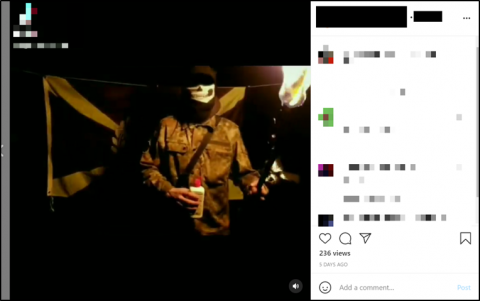 Atomwaffen Division propaganda video clips on Instagram. April 29, 2021. The video was still available three days after it was reported.

A Telegram channel belonging to a neo-Nazi podcast returned to Telegram on April 26 after being removed by the communications platform during the limited removal of extreme right-wing chats and channels in January 2021. In the interim, the podcasters have operated at least two alternate channels, one of which is still online, however, they have modified their language and posting habits. The channel created on April 26 has the same display name and channel icon as the channel removed on January 13 but uses a different link. Three days after the channel was created, it had approximately 860 members. The channel deleted in January had about 7,400 members.

The podcasters endorse neo-Nazi accelerationism, have advocated for violence, and have had James Mason as a guest on their show. In a video posted on the new channel, viewed over 2,600 times, the podcasters subtly endorsed attacks on the electrical grid.

The week of April 25 to May 1, CEP researchers located three pro-ISIS websites. On the .bg domain, the first website contained a wide variety of ISIS propaganda, including official videos, news clips and reports, photos, and new letters released by the terrorist group. The site is updated daily and contains execution footage in addition to appeals to commit terrorist attacks. The website operates a blank backup site on the .biz domain.

CEP researchers also found a pro-ISIS website on the Google-owned Blogger platform. The site, which contained posts in Indonesian, Malaysian, and Arabic, posts links to propaganda on other websites and links to communications channels on multiple apps, including Telegram, TamTam, and others. The site was still accessible three days after CEP reported it. The site’s first post was in early April 2021.