(New York, N.Y.) — The Counter Extremism Project (CEP) reports weekly on the methods used by extremists to exploit the Internet and social media platforms to recruit followers and incite violence. Last week, researchers found three Instagram accounts that posted propaganda content originally created by the white supremacist groups Atomwaffen Division (AWD) and The Base, as well as neo-Nazi videos encouraging violence against LGBTQ people and Jews. The videos had been on Instagram for an average of 41 days before being located.

Last week CEP also located a new ISIS propaganda video from the group’s self-proclaimed West African province, which was posted to at least 29 websites. Neo-Nazi Telegram channels posted the alleged home and work addresses of the Food and Drug Administration’s (FDA) Vaccines and Related Biological Products Advisory Committee members, encouraging violence against the individuals and their families. A neo-Nazi website announced a fundraiser to sell copies of the book Siege and to make t-shirts. Finally, white supremacists on Telegram celebrated the third anniversary of the antisemitic attack on Pittsburgh’s Tree of Life synagogue.

The week of October 24 to October 30, CEP located three Instagram accounts that posted neo-Nazi propaganda originally created by the Atomwaffen Division (AWD) or The Base. There is no evidence that the individuals who posted the content belonged to either group. The three accounts posted a total of eight videos that contained footage from videos released by the two groups, and some clips were combined with other footage that encouraged violence against LGBTQ people or Jews. The five videos with listed view counts had an average of 25 views each. Three additional video clips did not have view counts but had ten likes each. The videos were on Instagram for an average of 41 days when they were located, ranging between 35 and 51 days. The profiles were not removed after they were reported to Instagram by CEP, however one of the accounts had several videos removed approximately 18 hours after it was reported. 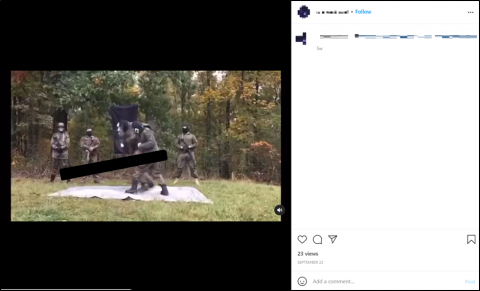 On October 30, ISIS released a new propaganda video from the group’s self-proclaimed West African province titled “Makers of Epics 5.” The footage shows combat between ISIS fighters and Nigerian security forces in the states of Borno and Yobe, including attacks on Nigerian military facilities and the burning of a barracks in the town of Damasak. The video also includes footage of the execution of two members of the Nigerian armed forces by a child soldier and the killing of a wounded Nigerian soldier by ISIS fighters. The video includes speeches from two members of ISIS’s West African province stating their support for ISIS and proclaiming that the group will be victorious.

Links to the video were located on RocketChat and Element, and the video was posted on Telegram, RocketChat, and Hoop. The video was additionally posted to at least 29 websites. Approximately 24-36 hours later, the video was still available on 13 websites: Transfer.Sh, the Microsoft One Drive, the Internet Archive, Bcove.Video, File.Fm, Filetransfer.Io, Fromsmash.Com, Gofile.Io, Mega.Nz, Siasky, Tune.Pk, Dropbox, and MediaFire. The Internet Archive removed the videos after CEP reported them.

On October 26 and 27, a neo-Nazi accelerationist Telegram channel posted what is alleged to be home or work addresses of members of the Food and Drug Administration’s (FDA) Vaccines and Related Biological Products Advisory Committee and encouraged violence against the listed individuals and their families. On October 26, the FDA panel endorsed the use of the Pfizer and BioNTech Covid-19 vaccination for children between the ages of 5 and 11. The dox information was shared by at least 11 other Telegram channels or chats.

The channel that first compiled the list endorses violence against doctors and vaccine providers, Jews, Muslims, immigrants, people of color, LGBTQ people, law enforcement, and others. The channel’s creators have alleged that Covid vaccines kill the recipients and view Covid vaccinations as part of an anti-white plot perpetrated by Jews.

Telegram removed the channel after CEP reported it on October 27 for violating the platform’s Terms of Service. The channel had over 1,250 members before Telegram deleted it. At least four versions of the channel have previously been removed from Telegram for Terms of Service violations since January 2021. The channel is part of a network of Telegram propagandists that promote neo-Nazism, the work of James Mason, and in some cases, the occult group the Order of Nine Angles.

On October 27, a neo-Nazi website announced a fundraising drive to print copies of James Mason’s notorious neo-Nazi book Siege and make t-shirts. The website requested donations be made either in Bitcoin, Monero, or money sent to a PO Box. Five days later, the website had received approximately $27.50 in Bitcoin. It is unclear whether the site raised any Monero due to the cryptocurrency’s privacy features.

The website is dedicated to spreading James Mason’s work and contains writings by several former members of the Atomwaffen Division and National Socialist Order. The site has previously requested cryptocurrency donations. The website uses Cloudflare as its name server and Enom as its registrar.