Neo-Nazi Propaganda That Promotes Violence and Hate Located on DeviantArt

The week of July 11 to July 17, CEP researchers located over a dozen accounts on DeviantArt that posted propaganda that encouraged violence, sought to recruit for an extremist group or glorified white supremacism.

The oldest account had been on the sight for approximately two years, while the most recent account, which posted a wide variety of neo-Nazi content, including content promoting white supremacist mass shooters Patrick Crusius and Robert Bowers, had been created in July 2021. An account that had been created on DeviantArt in March 2021 posted recent propaganda from the neo-Nazi group The Base, which included a recruitment email address for the group. An account also created in March 2021 posted content praising the Christchurch terrorist attack and encouraging additional violence. At least three DeviantArt accounts had similar user names as two individual users of the Fascist Forge forum and posted remarkably similar images to art and propaganda that appeared on the forum.

DeviantArt’s Terms of Service prohibit using the site “to upload, post, or otherwise transmit any material that is…offensive…unlawful, threatening, menacing, abusive, (or) harmful.” While several pieces of content were removed after they were reported, numerous pieces of reported content, including those that glorified white supremacist mass shooters, sought to recruit for a neo-Nazi extremist group, and posted various neo-Nazi symbols remained on the site.

CEP researchers located nine pro-ISIS accounts on Facebook during the week of July 11 to July 17. Content posted on the profiles included at least one full-length ISIS propaganda video, multiple video clips taken from official ISIS videos, propaganda photo sets, and text-based propaganda. In many cases, ISIS logos used in propaganda clips were covered up by emojis or other graphics. Accounts began posting ISIS content between mid-June and mid-July. Most video clips located on Facebook had between 15 and 125 likes or reactions. Two of the nine accounts were removed by Facebook after CEP reported them. Four days after the content was reported, ISIS propaganda was still available on the seven accounts not removed, including clips taken from the group’s official videos, as well as text and imagery supporting the terrorist group.

CEP also located a post that included an edited photo from the Christchurch terrorist attack video and digital drawings of the perpetrator. An account was additionally found that used a drawing of the Christchurch attacker as its profile photo and contained white supremacist and antisemitic text in the account’s profile. 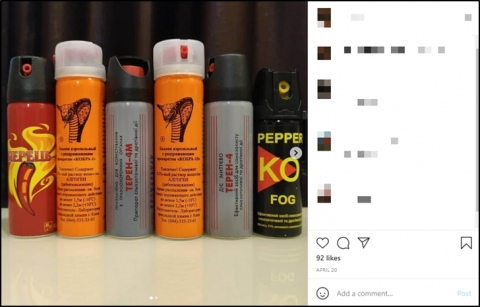 Pepper spray sold on Instagram by a white supremacist store with almost 11,000 followers

On July 13, CEP researchers located a clothing store operated by a known white supremacist on Etsy. The store offered t-shirts and other clothing and accessories using imagery including modified black suns/sonnenrads, modified swastikas, and an image of the notorious founder of the American Nazi Party, George Lincoln Rockwell. Etsy removed the store after CEP reported it.

An extreme right-wing prisoner outreach organization encouraged its followers to send a “white identity” magazine to incarcerated white supremacists. In August 2020, the same group urged their supporters to send articles to imprisoned white supremacists to help them radicalize other inmates. The group was founded in December 2019 and seeks to provide money, books, and letters to white supremacists in prison, including mass shooters such as Dylann Roof, Robert Bowers, and Patrick Crusius, and various members of the Atomwaffen Division and The Base. In May, the group began accepting the privacy cryptocurrency Monero. The group’s website has published antisemitic writing from prison by the accused Poway synagogue shooter, John Earnest. The organization maintains a Telegram channel, Gab account, and a website that uses Cloudflare as its name server and registrar.

“The CIA on Saturday unveiled the model of Ayman al-Zawahiri’s safe house in Kabul used to plan the U.S. drone stri… https://t.co/mcbJJDE06R