Extremist Content Online: Former Leader Of Neo-Nazi Group The Base Discourages Followers From Fighting In Ukraine

(New York, N.Y.) — The Counter Extremism Project (CEP) reports weekly on the methods used by extremists to exploit the Internet and social media platforms to recruit followers and incite violence. Last week, the founder and former leader of the neo-Nazi group The Base, Rinaldo Nazzaro, encouraged his Telegram followers not to go to Ukraine to fight. Four ISIS videos showing fighters pledging their allegiance to the group’s new leader Abu Hasan al-Hashimi al-Qurashi were posted on multiple websites. In addition, seven Facebook accounts with posts of ISIS propaganda and pro-ISIS content were located by CEP researchers. Finally, white supremacists and Islamophobes celebrated the third anniversary of the Christchurch terrorist attack on several platforms, including Telegram and 4chan.

On March 15, Rinaldo Nazzaro, the founder and former leader of the neo-Nazi group The Base, urged his Telegram followers, especially current or former members of The Base, not to travel to fight in Ukraine. Nazzaro, who lives in St. Petersburg, stated that Russia’s invasion was part of a conflict between “liberal globalist” camps and that white supremacists should not be involved. He additionally noted that anyone traveling to Ukraine as a foreign fighter would be heavily surveilled and most likely either killed by Russia or arrested by the U.S. or European states. Nazzaro highlighted the importance of accelerating collapse in the U.S. or Europe instead of becoming involved in a “NATO proxy war.”

Nazzaro claimed that he hopes the war will end and that he has no grievance with the Ukrainian people, however, he stopped short of explicitly voicing opposition to Russia’s invasion. In early February 2022, Nazzaro claimed that he was giving up “administrative responsibilities and control” of The Base to focus on his family and prisoner support.

The second video, “Jihad of the Believers Continues #2,” featuring ISIS’s self-proclaimed West Africa province, was released on March 15. The video shows four different groups of ISIS fighters pledging their allegiance to the new ISIS caliph, with one speaker claiming that the group remains strong. The video concludes with a nasheed paired with previously released combat footage and footage of executions from ISIS videos from Syria. In addition to Telegram, RocketChat, Element, Hoop, and pro-ISIS propaganda websites, the video was released on 24 other websites on March 15. Approximately 24 hours later, the video was still available on nine websites: Facebook, the Internet Archive, Bcove, Mail.Ru, File.Fm, the IPFS distributed web protocol, Jawcloud, Transfer.Sh, and Pcloud. The video was additionally uploaded to ten websites on March 16. Approximately 24 hours later, the video was only available on two sites: Top4top and the IPFS distributed web protocol.

A fourth video, released on March 18 from ISIS’s self-proclaimed province in Somalia also consisted of the group’s followers pledging their allegiance to al-Qurashi. In addition to Telegram, Hoop, RocketChat, and Element, the video was released on at least 24 websites. In approximately 72 hours, the video was available on five websites: the Internet Archive, Mail.Ru, the IPFS distributed web protocol, Jwp.Io, and Transfer.Sh.

In all four cases, the Internet Archive made the video only available to logged in users after CEP reported it.

Videos will likely be released from other ISIS provinces in the near future, also showing fighters reciting a pledge of allegiance to Abu Hasan al-Hashimi al-Qurashi in an effort to show that the terrorist organization is united and remains active. 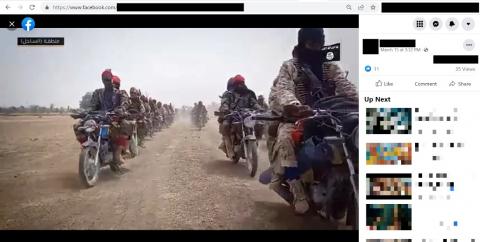 On 4chan, three different threads, one made on March 14 and the other two on March 15, glorified the terrorist. Some posts advocated for additional acts of anti-Muslim violence, and several commenters posted memes or links to the attack video. Some 4chan posters spread conspiracy theories related to the attack, alleging that Israeli agents perpetrated it. The threads had 331, 286, and 101 comments, respectively, on March 16. Posts included links to the attack video and the terrorist’s manifesto on the website Catbox.Moe and videos on Odysee glorifying the attack.

Users of a white supremacist dark web forum also commemorated the attack by posting memes, links to the attack video, and encouraging additional acts of violence.