Additionally, CEP researchers found a depositary on the dark web containing over 100 blueprints for 3D-printed firearms. A link to the site was posted on a dark web imageboard that encourages acts of white supremacist terrorism.

On December 1, multiple extreme-right accounts on Telegram praised Ye (previously known as Kanye West) for stating on Alex Jones’s InfoWars program that he “likes” Adolf Hitler. Extreme right Telegram users praised Ye’s statement and celebrated the event for spreading antisemitism. One neo-Nazi Telegram personality stated that “We have the best seats in the theater,” while another posted that no one should feel hopeless as long as antisemitism was being spread openly. The main Proud Boys Telegram channel, with over 22,000 subscribers, shared a message from a regional chapter asking when Ye would release hats in the Proud Boy’s colors.

Neo-Nazis and white supremacists on Telegram made multiple posts glorifying the man who allegedly murdered five people and wounded 19 others in an attack with firearms on an LGBTQ+ club in Colorado Springs. Shortly after the attack on November 19, multiple channels praised the gunman, with several referring to him as a “saint.” Channels posted the attacker’s alleged social media pages. On November 30, the U.S. Department of Homeland Security released a National Terrorism Advisory System Bulletin warning that online extremists were praising the attack.

On November 27, the neo-Nazi group Nationalist Social Club (NSC) requested that their online followers send tips on Telegram or Protonmail regarding events they should protest. NSC members harassed and sought to fight with Cambridge, Massachusetts, residents in November and have previously protested outside of drag events in the Boston area, seeking to intimidate attendees.

On November 26, an accelerationist neo-Nazi website posted a blog on exploiting the aftermath of natural disasters, citing anti-black racial discrimination and violence in the aftermath of Hurricane Katrina. The post stated that natural disasters or other unnamed human-made incidents that overwhelm law enforcement are an opportunity for the creation of local white militias. The website celebrated violence committed by white vigilantes against African Americans in the New Orleans neighborhood of Algiers Point in the absence of “mercenary” law enforcement. The post stated that it was important for their audience to prepare for future “racial struggle.” The website has endorsed Atomwaffen Division successor organizations and recently severed ties with James Mason. The website uses Cloudflare as its registrar and name server.

On November 30, a Telegram channel belonging to a clothing brand affiliated with Robert Rundo and the active club movement posted a list of 50 Twitter accounts, encouraging the channel's over 5,000 subscribers to mass report them. The 50 accounts mainly belong to regional anti-fascist groups but include individuals and one news organization who have opposed or reported on Rundo, active clubs, or affiliated groups.

Depository on the Dark Web for 3D Printed Firearms Located

On November 29, CEP researchers located a depository on the dark web for blueprints for 3D-printed firearms. The website contained over 100 different files for plans for making pistols, submachine guns, rifles, and shotguns, as well as firearms components. A link to the website was posted on an imageboard on the dark web that encourages acts of white supremacist terrorism. All files were uploaded to the depository between July and November 2022, with the overwhelming majority uploaded in late November.

On November 25, the pro-ISIS al-Azaim Media Foundation released the 18th issue of the web magazine “Voice of Khurasan.” Articles criticized the Taliban for engaging in diplomatic relations with the U.S., Russia, and China, as well as for being alleged “mercenaries” of the West and fighting against ISIS-K. Similarly, the magazine stated that the Taliban had deviated from the religiously correct path and embraced disbelief. The magazine also contained a biography honoring Asadullah al-Urgenchi, the former head of the Islamic Movement of Uzbekistan’s propaganda wing, who pledged allegiance to ISIS-K and was killed in a drone strike in 2018. The magazine encourages acts of terrorism and provides information on contacting the pro-ISIS-K al-Azaim Media Foundation.

In addition to Telegram, RocketChat, and a cloud storage site, the web magazine was located on the Internet Archive, Anonfiles, Fastfileupload, Gofile.Io, MediaFire, Scribd, and Sendspace. Anonfiles, Gofile.io, Scribd, and MediaFire removed the links after they were reported by CEP. 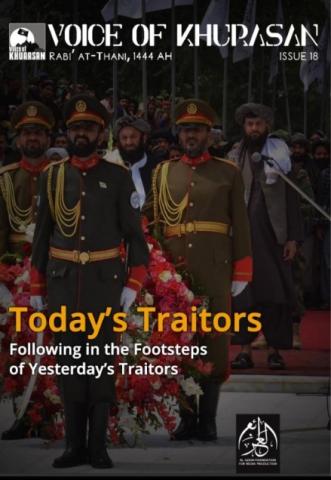 In a statement, the U.S. military’s Central Command stated that Abu Hasan al-Hashimi al-Qurashi had been killed in mid-October by “the Free Syrian Army in Dar’a province in Syria.”

ISIS online supporters sought to downplay the killing, stating that they had a thousand potential leaders, and praised Abu Hasan al-Hashimi al-Qurashi for dying while engaged in fighting. Another message said that the group’s former leader was killed and quickly replaced, while al-Qaeda has not publicly announced a successor to Ayman al-Zawahiri, who was killed in a U.S. drone strike on July 31, 2022. 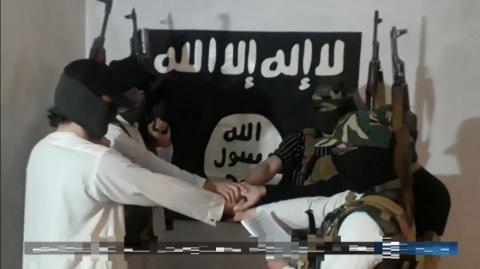 A propaganda photo from ISIS’s self-proclaimed province in Afghanistan, released on Telegram on December 1, 2022.