The mistreatment and abuse of women by Islamic extremist groups such as ISIS has been widely reported in Western media.

In this blog, we’ll explore four important considerations when it comes to women and their exploitation by ISIS.

1. A growing need for women.

Initially, women were discouraged from joining ISIS, and were told to not seek roles within the group. This quickly changed as the self-proclaimed “Islamic State” grew.  The group’s leader, Abu Bakr al-Baghdadi, called for wives and mothers to join the ‘Caliphate.’ Female battalions such as “Al-Khansaa” and “Umm al-Rayan” were soon launched after men were caught dressed in women’s burqas attempting to avoid detection at ISIS controlled checkpoints.  ISIS has also developed sophisticated social media messaging in an attempt to recruit women and girls.

ISIS mistreatment of women is well documented. For example, cases of forced marriage, slavery and rape have been reported by the United Nations and watchdog groups such as Amnesty International. Muslim women are also reportedly being recruited for “jihad al-niqah” or “sex-jihad.” Sex-jihad is religiously sanctioned: some sheikhs argue that male fighters need sex to help them fulfill their wartime duties.

ISIS also kidnaps women and children from areas it captures, dividing and distributing the non-Muslim women and children among the jihadists as sex slaves - an act that ISIS fighters claim is justified under Sharia law. There are also reports that ISIS runs slave markets across Iraq in which Yazidi women are sold as part of an effort to lure new recruits to the fighting. The ISIS female police force, the al-Shanssaa Brigade, reportedly facilitates the enslavement of Yazidi women for the sexual pleasure of male fighters. 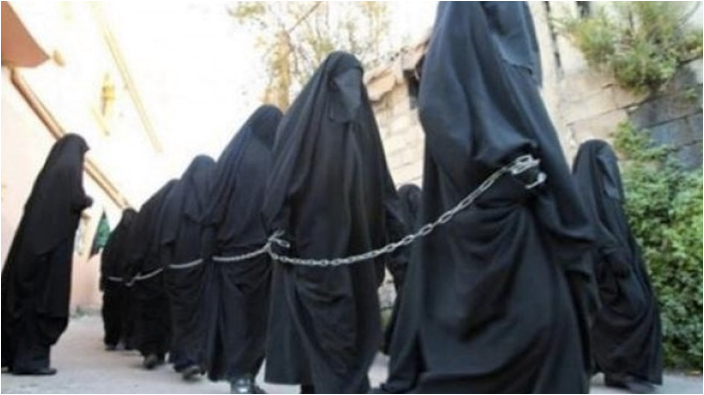 [A photo purportedly taken in a slave market in ISIS-controlled Iraq.]

It is currently estimated that 10 percent of international ISIS recruits are women and girls, who travel predominately from France, England, Belgium, Austria and Spain. Most of these women are believed to be between 18 and 25 years old, although there are reports of girls as young as 13 leaving their families in pursuit of life as a jihadi.

The question is: how are these women being radicalized to the point where they are willingly leaving everything they know? Authorities and experts on the subject believe that ISIS preys on feelings of alienation and injustice as well as the right mix of “indoctrination and seduction” to draw young females. Many times, the families of the recruited girls and women are completely unaware that they were even radicalized.

Many women living within ISIS-controlled territories assist such advertising and recruitment efforts by uploading photos of their “bearded Prince Charmings” on Facebook, Twitter and other media outlets. For example, the “Diary of a Muhajirah,” the Facebook page of a Western doctor turned wife of an ISIS fighter, romanticizes life within the “Islamic State:” 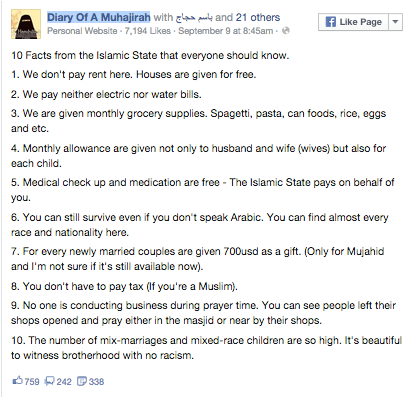 One can also locate directions and tips for traveling to the “Islamic State” on Twitter, Tumblr and other websites, where women also are available to answer any questions and offer advice to potential recruits.

Shaista Gohir of the UK Muslim Women’s Network states that “some of these girls are very young and naive, they don’t understand the conflict or their faith, and they are easily manipulated.”

Indeed, many young female recruits don’t seem to understand that joining and strengthening a group like ISIS will lead inexorably to the disappearance of their liberties and quality of life. 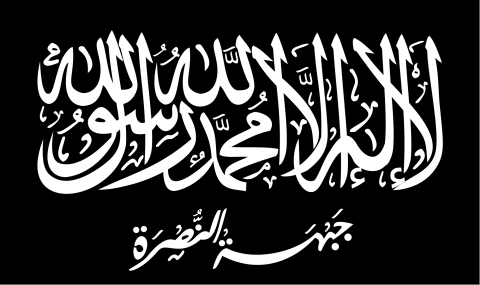 Should We Still Care about the Khorasan Group?

On September 13, the American public was first introduced to the Khorasan Group after the Associated Press broke a story calling the cell “a mix of hardened jihadis from Afghanistan, Yemen, Syria and Europe” that U.S. officials consider “a more direct and imminent threat to the United States than ISIS.”

Just 10 days later, on September 23, President Obama announced U.S. airstrikes against ISIS, the al-Qaeda affiliate Jabhat al-Nusra, and the Khorasan Group. In the wake of intelligence reports that the Khorasan Group was recruiting from the influx of Western jihadists in Syria in order to redirect them to attacks on European and U.S. soil, the U.S. launched 46 cruise missiles against Khorasan, which had reportedly reached the execution phase of an attack against the U.S. and Europe.

More than two months have passed since the U.S. conducted the strikes, and mentions of the Khorasan Group in the media have all but disappeared. Should we still care about the elusive group? Or has the threat been neutralized?

Reports in the immediate aftermath of the U.S. attack on Khorasan stated that the U.S. strikes killed Khorasan’s leader, Muhsin al-Fadhli. Indeed, the group’s deputy leader Sanafi al Nasr confirmed Fadhli’s death in two consecutive Twitter posts, praising Fadhli as a martyr. We now know that these reports were premature. U.S. officials maintain that Nasr’s confirmation was a hoax and Fadhli is suspected to remain at large. U.S. officials have also not confirmed the death of reported Khorasan member and Jabhat al-Nusra sniper Yousef al-Turki, despite Nasr’s Twitter post of a photo allegedly proving his death.

Despite initial characterizations of the airstrike as a success, officials now state that the Khorasan group has not been set back, and no plots have been significantly disrupted. On October 10, the Associated Press cited American intelligence officials who revealed that the U.S. strikes killed only one or two key Khorasan members and speaking to CNN on October 21, the former Director of the National Counterterrorism Center said that the Khorasan Group is “still in the same place” as it was before the September airstrikes.

While the Korashan Group might not be in the forefront of the public conversation in the same way as ISIS, reports of the group’s continued progress towards plotting an attack on America and Europe clearly demonstrate that the Khorasan Group poses a grave threat to global safety and security. For an in-depth analysis of the group and the ongoing Khorasan threat, see CEP’s report.