Why Does Content with Links to Terror Persist Online?

In the aftermath of the terrorist attack in New York City on October 31, city authorities began putting up concrete barriers along the Hudson River Park Bikeway as a form of protection. It still remains to be seen, however, whether tech companies will take the necessary steps to prevent the upload and distribution of the videos that galvanized the attacker. Sayfullo Saipov, who killed 8 people and wounded 12 others when he drove his rental truck into a bike path in Lower Manhattan, was an avid fan of ISIS propaganda. Despite the overwhelming evidence that such content presents a danger to the public, tech companies including WordPress have been reluctant and too slow in their response towards taking comprehensive action to removing this material.

Saipov’s attack was a textbook case of a vehicular attack, straight from the pages of ISIS’s magazine Rumiyah and the terror group’s online videos. According to the criminal complaint, he “(W)as inspired to carry out the Truck (sic) attack by ISIS videos he had watched on his cellular phone.” Furthermore, “Saipov was motivated to commit the attack after viewing a video in which Abu Bakr al-Baghdadi…questioned what Muslims in the United States and elsewhere were doing to respond to the killing of Muslims in Iraq.” Law enforcement officers found more than 90 ISIS videos on the attacker’s phone, along with thousands of photos related to the terrorist group.

Saipov meticulously followed the steps outlined in Rumiyah and repeatedly echoed in ISIS videos. He planned ahead, rented a truck, carried secondary weapons, left notes at the scene stating his motivation, and chose a day—Halloween—when people were bound to be outside in large numbers.

ISIS propaganda videos are still too easily found online. In the same week as the Lower Manhattan attack, the Counter Extremism Project (CEP) located ISIS videos on 19 different websites and platforms, including a clip on the Internet Archive instructing how to carry out a vehicular assault identical to Saipov’s. 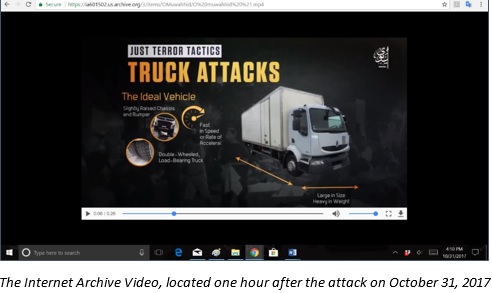 On November 6, CEP located a WordPress blog that hosted nearly 200 links to the Baghdadi speech in which the terrorist leader encouraged his followers to continue their fight all over the world, specifically urging attacks in the West, and not allowing “the Crusaders and the apostates to enjoy a good and comfortable like at home while your brothers are enduring killings, shelling and destruction.” CEP immediately contacted Automattic, which owns WordPress, requesting the removal of the blog. By the morning of November 9, the site was finally taken down.

While Automattic took action in this one instance, they have failed to remove other pieces of ISIS content on their platforms. Four different WordPress sites containing links to ISIS videos and radio broadcasts remain online, despite CEP informing Automattic of their existence in August 2016 and September 2017. Automattic’s continued refusal to remove these sites is deeply troubling.

It should not have to take the violent murder of innocent people for tech companies to remove terrorist propaganda. Furthermore, these companies, with millions if not billions of dollars in resources at their disposal, should be actively working to remove such content on their own, not only after third party actors such as CEP bring the existence of the content to their attention.

An excerpt of CEP's letter to Automattic is below. The full letter is available here.

Re: WordPress and Sayfullo Saipov

The Counter Extremism Project (“CEP”) is writing to alert you to the existence of Dibbayanweb.WordPress.com, a WordPress site hosting almost 200 links to the video that incited Sayfullo Saipov to murder eight people in Lower Manhattan. According to the FBI Complaint filed against Saipov, he “was motivated to commit the attack after viewing a video in which [ISIS leader] Abu Bakr al-Baghdadi…questioned what Muslims in the United States and elsewhere were doing to respond to the killing of Muslims in Iraq.” (New York Times, “Complaint Against Suspect in Manhattan Terror Attack,” 1/11/2017)

The video, entitled “But Sufficient Is Your Lord as a Guide and a Helper,” was released by ISIS on September 28, 2017. In it Baghdadi’s encourages his followers to continue their fight all over the world and specifically urges more attacks in the West, stating “America, Europe and Russia are living in a state of terror fearing the strikes (from ISIS terrorists).” Baghdadi urges his listeners not to “allow the Crusaders and the apostates to enjoy a good and comfortable life at home while your brothers are enduring killings, shelling and destruction.” 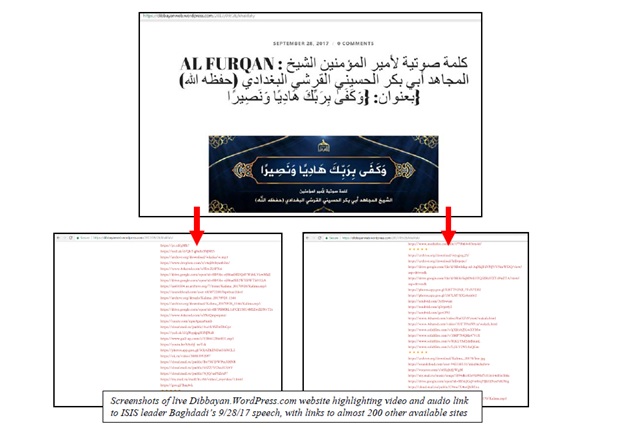 As CEP has consistently sought to convey, the existence of ISIS propaganda online has tangible and terrible consequences in the real world. In this case, there is a demonstrable link between specific ISIS content and the murder of 8 innocent people in cold blood. Given this fact, it is difficult to understand why this content has not yet been removed from the WordPress site. Please confirm your intention to immediately take action to remove this site.

CEP also awaits your response to our three most recent letters concerning WordPress and its hosting of Taliban, ISIS, and al-Qaeda content. The existence of sites like Dibbayan.WordPress.com suggests your strategy to combat extremism online remains capricious and ineffective.

We look forward to your response confirming the removal of Dibbayan.WordPress.com and providing clear answers to the plethora of issues raised in this and earlier letters. Please let us hear from you by Wednesday, November 8, 2017.