YouTube has since claimed that nearly 70 percent of violent extremist content is taken down within eight hours of upload, and that its content removal process uses a combination of technology and human review. Furthermore, the video was flagged as “age-restricted,” meaning that YouTube’s review team did note that it contained graphic content. Nonetheless, the video was still accessible on YouTube with more than 3,700 views over nine months later on February 12, 2018. 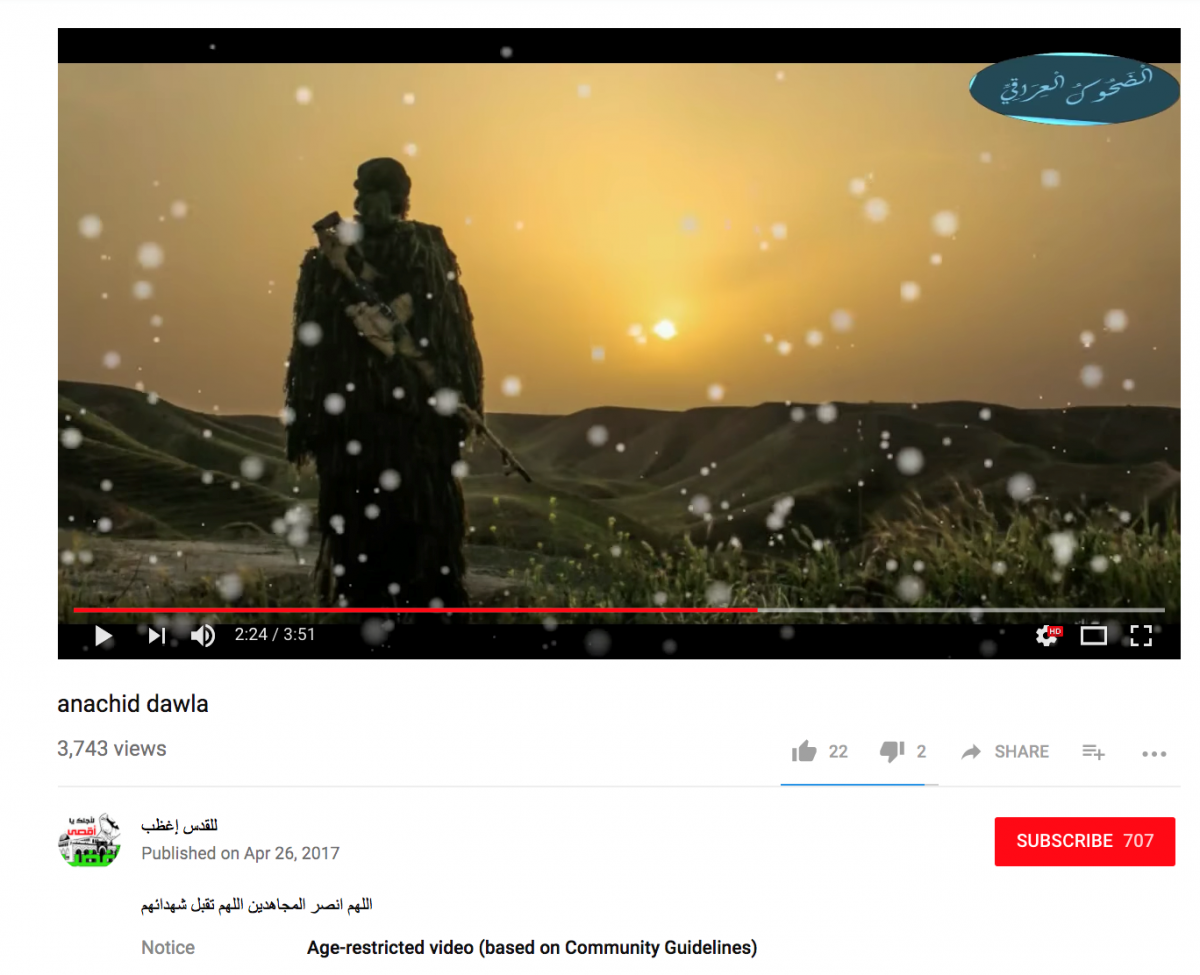 A scene from a fan-made pro-ISIS video overlaid with a falling snow animation (screenshot taken February 7, 2018)

YouTube may have improved its methods to identify, flag, and remove extremist content, but extremists are also actively––and creatively––finding ways to circumvent them. For example, a video uploaded to YouTube on October 21, 2017, appeared to be a half-hour long Al Jazeera news segment. In reality, a 28-minute-long ISIS propaganda video entitled “To Where, Al-Bahrayn” played after a brief introduction stolen from an actual Al Jazeera news broadcast. The ISIS propaganda video was presented in a box as if it were a film clip being played within the Al Jazeera news segment, even going as far as keeping the Al Jazeera logo in the lower right corner. The video was still present on YouTube five days later on October 26. 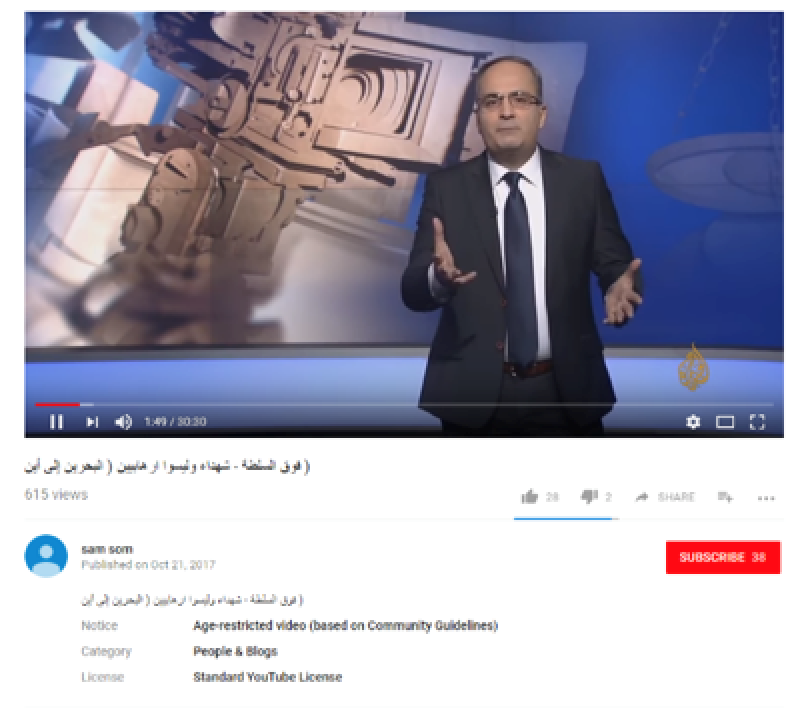 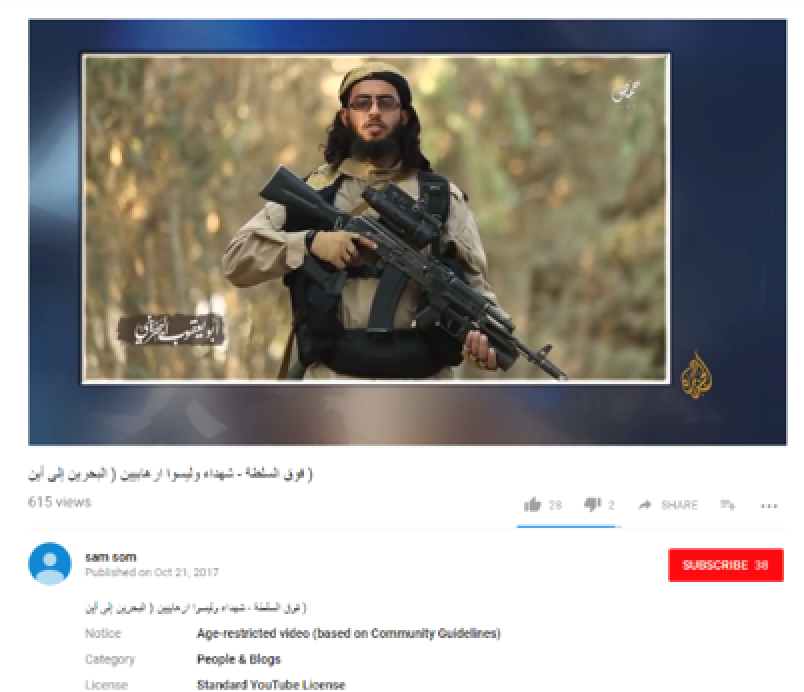 ISIS video “To Where, Al-Bahrayn” presented as a film clip with the Al Jazeera logo in the lower right-hand corner (screenshot taken October 26, 2017)

Other techniques used to bypass YouTube’s content filters have been more straightforward. The ISIS-affiliated Amaq News Agency released a video clip depicting a missile attack on an Egyptian helicopter in December 2017. The clip was uploaded by a YouTube user on December 22, but with the Amaq News Agency logo blurred out from the upper right-hand corner and with a new stamp––depicting hands folded on a lap––superimposed in the upper left-hand corner. This video was still accessible on YouTube as of February 12, 2018. 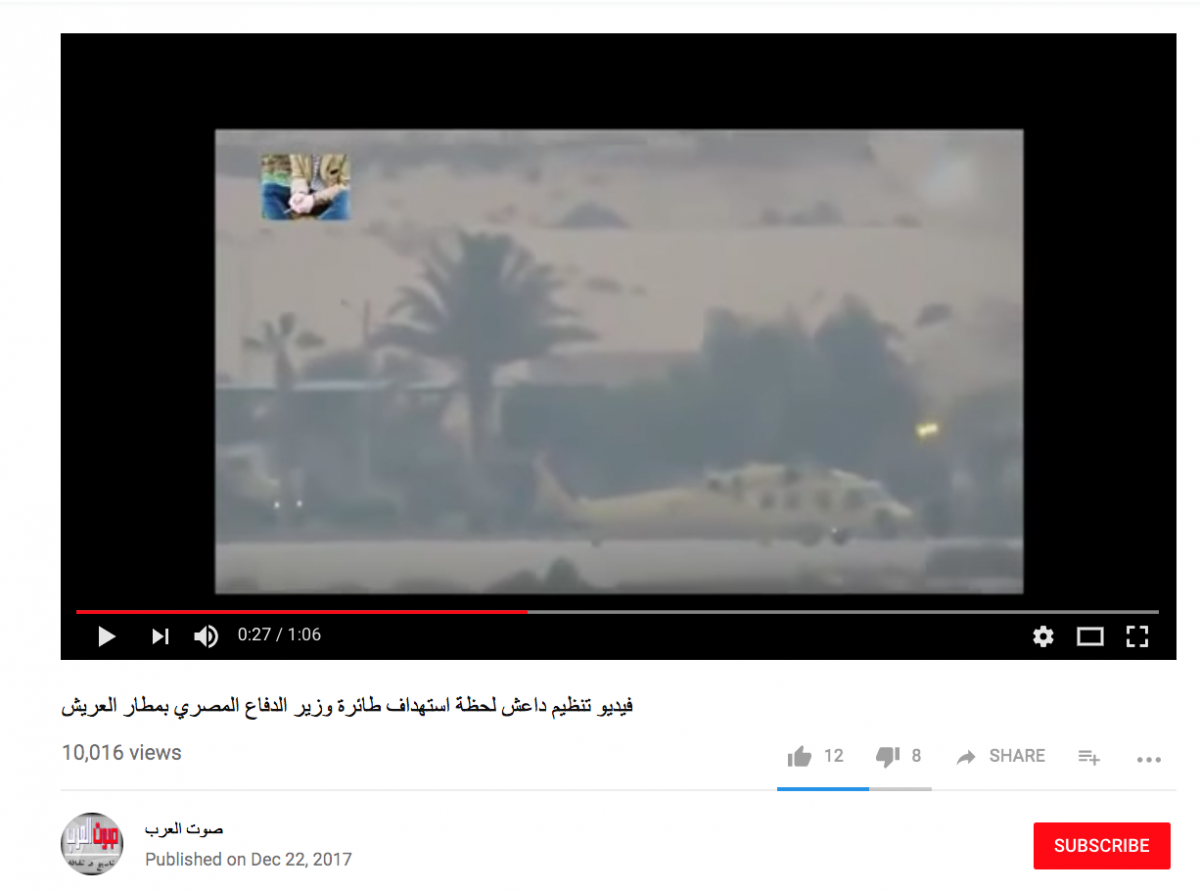 An Amaq News Agency video release with the Amaq logo blurred out from the upper right-hand corner and a new stamp superimposed on the upper left-hand corner (screenshot taken February 7, 2018)

Another version of the same ISIS clip was also uploaded to YouTube one day earlier, on December 21. While the original video clip featured the sound of a rushing missile and shouts of “Allahu Akbar!” as the helicopter dissolved into flame, this version––which did clearly display the Amaq News Agency logo in the upper right hand corner––instead featured an upbeat, cheerful-sounding piano track called “New York Love” by Dean Wagg. This video was also accessible on YouTube as of February 12, 2018.

YouTube claims that 98 percent of videos removed for violent extremism are flagged by its machine-learning algorithms, but that its removal process also includes human review. Extremists have also implemented techniques aimed to dissuade human reviewers from flagging a video for extremist content. For example, the pro-ISIS “War and Media Agency” operates multiple YouTube channels and uploads videos that broadcast statements from ISIS’s Amaq News Agency in a robotic voice. However, the “War and Media Agency” attempts to disguise itself as a documentary news channel, and frequently issues a statement at the beginning of its videos claiming that they were “posted strictly for educational and informational purposes.” Videos uploaded by the “War and Media Agency” regularly remain on YouTube for up to several weeks or months. 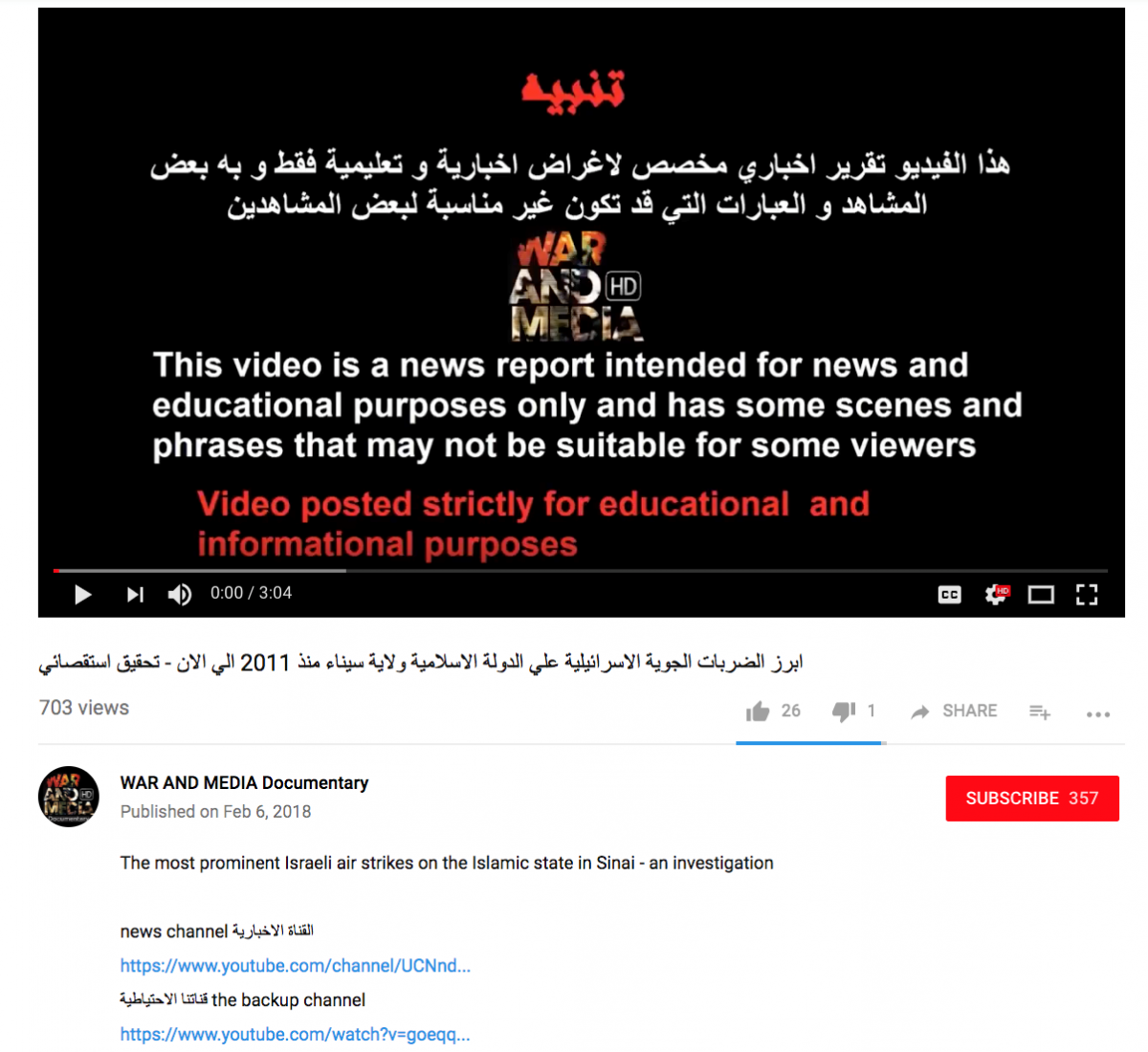 The introduction from a video uploaded by the pro-ISIS “War and Media Agency” (screenshot taken February 7, 2018)

Although YouTube claims to have developed new technologies to combat violent extremist content, extremists are also constantly innovating to override them. It is unacceptable that these innovations evidently have not yet been identified and impeded by YouTube—the world’s dominant video sharing platform. Extremists will continue to use the platform to spread their messages of violence and hate until YouTube adopts a more proactive and comprehensive approach to fighting violent extremist content on its platform.