In the latest blow to ISIS’s military prowess, U.S.-backed forces recaptured Raqqa, Syria, on October 17. In July, the terror group lost control of Mosul, Iraq’s second largest city, which it captured in 2014. These major territorial losses present a serious PR problem for the group, which relies heavily on the public image that it cultivates through online propaganda. ISIS has strived to re-frame its losses in a positive light and assure its supporters that it is undeterred. However, the loss of Raqqa--the de facto capital of ISIS’s caliphate–may be ISIS’s greatest PR challenge to date. Nonetheless, if ISIS is able to overcome this reputational setback, it may prove itself to be more dangerous than even before.

In the August 2017 issue of Rumiyah, ISIS’s slick, English-language propaganda magazine­, ISIS tried to redefine its bitter defeat in Mosul as a victory. One article declared that “anyone who witnessed the Battle of Mosul knows with certainty that the Battle of Raqqah will be nothing but a loss and source of regret for the murtaddin [apostates] and their supporters.” The issue also featured a graphic boasting of ISIS’s “successes” in Mosul, such as the number of casualties that the group inflicted. Similar graphics about the battle of Raqqa also appear in the August and September issues, despite the significant losses that the group was already suffering there. 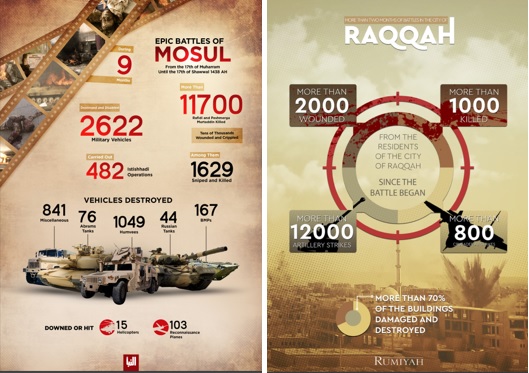 As ISIS’s capital, Raqqa was of utmost symbolic and strategic importance to the group. “It was among the first cities which the mujahidin conquered,” an ISIS military commander explained in the August 2017 issue of Rumiyah. “Raqqah was the base from which the Islamic State expanded, and the center for the Khilafah’s [caliphate’s] operations on the various fronts.” Unsurprisingly, ISIS appears to be struggling with painting the loss of its most important city in any positive light. Thus far, it appears to think that silence is the best policy until it can resolve how to explain this obvious PR crisis. The October 19 issue of ISIS’s weekly Arabic newsletter––published two days after the city was officially retaken––did not contain a single mention of Raqqa. And ISIS has so far failed to publish its October issue of Rumiyah––a periodical that it has released near the start of every month for over a year now.

Another approach that ISIS has taken in recent months has been to portray itself as simply undeterred by its losses: July’s issue of Rumiyah featured an article entitled “Either We Exterminate the Mushrikin [sinners] or Die Trying.” And while ISIS is probably in reality seriously disconcerted, its determination to persevere beyond its territorial losses is no mere empty threat. After all, ISIS existed as a dangerous threat even before it laid claim to a caliphate. The group today known as ISIS evolved from its predecessors al-Qaeda in Iraq (AQI) and the Islamic State of Iraq (ISI)––which functioned principally as insurgent groups during the Iraq war. ISIS may plan to revert back to guerrilla warfare in the event it loses all of its territory, bide its time and make another grab at a caliphate when conditions are favorable again.

Furthermore, ISIS has a more dangerous tool at its disposal: its virtual caliphate. Through its remarkably adept use of technology and digital media, ISIS was not only able to entice more than 40,000 people from around the world to join its fight in Iraq and Syria, but also to direct and inspire people to carry out attacks in its name globally––in effect, extending its reach and reputation far beyond the bounds of its physical caliphate. In the issue of Rumiyah following the August 2017 Barcelona attack, ISIS stated that “the soldiers of the Islamic State will escalate these attacks to a greater level in the coming period.” Indeed, without claims to a caliphate, ISIS will find it more crucial than ever to encourage and claim credit for attacks, especially in the West, in order to maintain the public perception that it is a capable and dangerous threat.

It remains to be seen whether ISIS can convince potential supporters that despite the fall of Mosul and Raqqa, it is still capable of plotting and inspiring attacks like Barcelona, Orlando, Manchester, and Paris. An ISIS that can retain fierce loyalty and influence despite setbacks on the battlefield could be more dangerous than ever. It therefore becomes more essential than ever to also confront ISIS on the virtual battlefield––in additional to the territorial one.