Tech & Terrorism: Deepfake May Be “Tip Of The Iceberg” In Russia’s Disinformation Campaign

(New York, N.Y.) — On March 16, 2022, a deepfake video of Ukrainian President Volodymyr Zelenskyy calling upon Ukrainian troops to surrender surfaced on several social media platforms and was placed on a Ukrainian news website by hackers. Ukrainian authorities had warned about the possibility of Russia using manipulated videos in its disinformation campaign and according to Counter Extremism Project (CEP) Senior Advisor and University of California, Berkeley professor Dr. Hany Farid, the video may be “the tip of the iceberg.”

Dr. Farid has previously explained the potentially catastrophic effect deepfakes could have in the real world if left unchecked by tech companies.

In 2020, Dr. Farid participated in the joint CEP and Konrad-Adenauer-Stiftung (KAS) Webinar On The Threat Of Deep Fakes To Democracy And Society. In the webinar, Dr. Farid highlighted the threat deepfakes pose to national security, using the example that someone could create a video that makes it appear a country is launching a nuclear attack. If this were to happen, tech companies would only have minutes to react before the video created sufficient harm, demonstrating the very real and world-altering threat deepfakes pose—especially in war time.

Tech companies much remain vigilant and actively work to keep deepfakes and misinformation off their sites. Moreover, the industry must take responsibility and be held accountable when fake information is posted and permitted to spread on their platforms. In 2019, Dr. Farid emphasized this point: 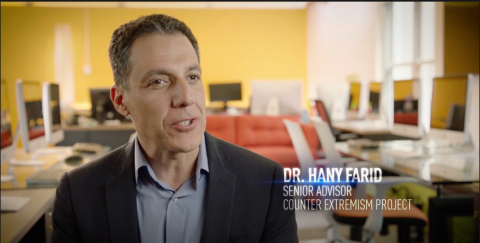 To watch CEP’s Webinar: On The Threat Of Deep Fakes To Democracy And Society, please click here.

ICYMI: CEP Analysis On Foreign Fighters In The 2022 Russia-Ukraine War