With the interconnectivity that comes with the Internet and social media, extremists who would have otherwise never found each other are coming together like never before – and they’re finding strength in numbers. The New York Times reported last week on such an annual event in Germany, the eighth annual ‘Eichsfeld Day,’ which was a grouping of the National Democratic Party, a political party “of avowed neo-Nazis better known as the NPD.” It brought “right-wing enthusiasts” who “preach anti-immigrant, pro-white gospel.” This year’s festival was more scarcely attended, as many typical festival goers were attending a demonstration with other “far-right sympathizers.” As one festival goer told the Times, “Right now, it’s like this for me: When I drive through the city, I see black people and immediately – pooh,” he said, adding, “I’m filled with hate because there’s always more and more coming. I am not at home when everyone looks different than me.”

As the Counter Extremist Project (CEP) has highlighted before, Internet platforms are normalizing the alarming trend of the rise in neo-Nazi propaganda. Earlier this month, an edition of the book Siege by James Mason was available on Amazon. While it has since been taken down, it explicitly made the case for a violent “leaderless neo-Nazi guerilla movement,” as well as “lone wolf terrorism to bring down the government.” The American neo-Nazi group Atomwaffen Division, whose members have killed five people since May of last year, have pointed to its importance for the group. Other well-known neo-Nazi books, including The Turner Diaries, are also available on Amazon. They are available through “Amazon marketplace,” which lets third party vendors sell them. Siege, on the other hand, is sold through Amazon. This means that it is in Amazon’s warehouse, and Prime members can capitalize on deals like quicker and free shipping. Siege Culture, another neo-Nazi propaganda group with ties to Atomwaffen Division, promoted Siege’s release on Amazon on their Gab account.

Amazon is not the only platform to allow the circulation and promulgation of such propaganda. Just over a week ago, a video that was made by a pro-ISIS web security / counter surveillance group called the Electronic Horizons Foundation was made available on multiple websites. These included Telegram, YouTube, Google Drive, Google Photos, Vimeo, Amazon Cloud Drive and Dropbox. The video teaches its viewers to remove the microphone and camera from Android phones in order to circumvent intelligence agency’s potential to surveil through a user’s phone. The video falls into a categorical loophole, as it outlines technical advice, not necessarily terrorist propaganda. A week after its posting, the video was still active on five websites.

Google has removed an English language guide titled, “Four Easy Ways for Making an Explosive Belts and Vest (sic);” however, the French version is still online as of September 27, 2018. The English version was posted on September 22 and was removed shortly afterwards. The French version of the manual was posted on September 23 and CEP reported it on September 27; however, three days later, the manual was still online. It is not clear why there was a discrepancy in removal times between the two guides, which used the same logo and graphics. Both manuals were made by Al Saqri Foundation for Military Sciences.  Several of the older Al Saqri bomb guides have been reported to Google Drive in August and early September, however they remain online. 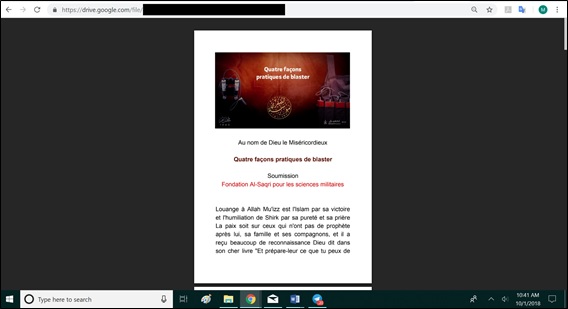 On Sunday, September 23, ISIS released a video via the group’s Amaq News Agency claiming responsibility for the attack the previous day on an Iranian military parade in Ahvaz, Iran. Gunmen disguised as Iranian soldiers killed 29 people and wounded 70, including several civilians. Iranian media has suggested that groups other than ISIS might have been responsible for the attack, such as the Patriotic Arab Democratic Movement in Ahwaz. In the Amaq News Agency video, three of the four attackers are shown; however, they do not reference ISIS, nor do they pledge their allegiance to ISIS’s leader, Abu Bakr al-Baghdadi. The lack of an explicit ISIS reference has led to speculation that another group may be responsible. 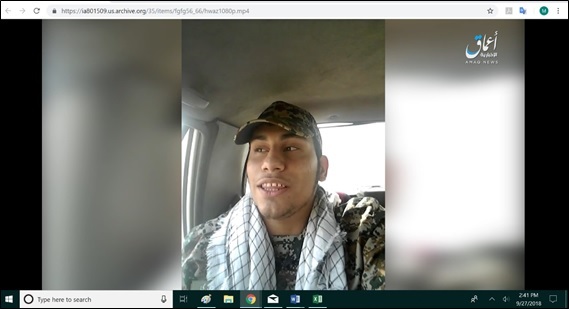 The Amaq News Agency Video On The Internet Archive, September 27, 2018

In an unusual move, three days after claiming the attack in Ahvaz, Iran, ISIS reasserted their declaration of responsibility. ISIS’s official spokesperson, Abul-Hassan al-Muhajir released an audio recording titled, “The Muwahhidin’s Assault on the Tower of the Mushrikin” through the group’s Al Hayat Media Center, in which he reaffirmed that ISIS was responsible for the assault. While ISIS has previously followed an Amaq statement with an additional claim from the group, it is particularly rare for the ISIS spokesperson to make a statement. Muhajir additionally declared that ISIS defeated Iran’s Revolutionary Guard, which is feared in the West, and urged steadfastness among ISIS fighters in Iraq and Syria. Transcripts of the speech were released via the Internet Archive as PDFs in English, French and Russian. 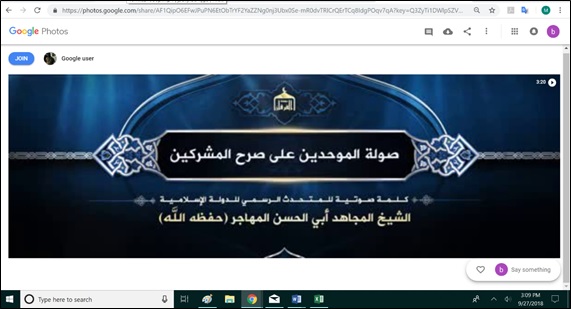 Statement From ISIS Spokesperson Abul-Hassan al-Muhajir On Google Photos, Approximately 24 Hours After It Was Uploaded

On Tuesday, September 25, ISIS released a new video titled, “Harvest of Humiliation” from the group’s self-proclaimed province in Kirkuk, Iraq. The video shows combat, night raids and executions committed by ISIS.  In the video, ISIS states that the Kurds must be prevented from obtaining their own state. 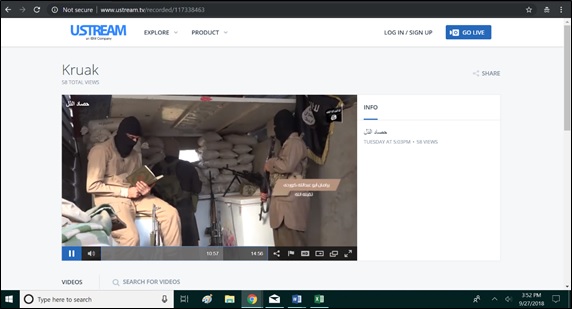 “Harvest Of Humiliation” On The IBM Cloud Storage Site Ustream, September 27, 2018, Approximately 48 Hours After The Video Was Uploaded

A video made by the pro-ISIS web security/counter surveillance group Electronic Horizons Foundation is still available on several websites after being uploaded approximately one week ago. The video, with English and Arabic subtitles, shows the viewer how to safely remove the microphone and camera from Android phones. This information is important because it has been alleged that intelligence agencies have the ability to activate smartphone cameras and microphones for surveillance purposes. Videos such as this one pose a challenge to content reviewers: the video itself might not violate a site’s terms of service because it provides technical advice and is not terrorist propaganda. Additionally, the video itself offers few visual clues that the group supports ISIS.

Neo-Nazis Congregate And Celebrate Extremist Beliefs At Annual Festival. “Scattered amid the children’s games and guitar-strumming folk singers, though, were unwelcoming messages.  ‘Stop the asylum flood’ on a brochure. ‘Asylum traitors not welcome’ on a T-shirt. ‘White Power’ on an album.  This was the eighth annual Eichsfeld Day, a gathering of the National Democratic Party, which is a political party of avowed neo-Nazis better known as the NPD. Recent violent demonstrations in the eastern German city of Chemnitz drew worldwide attention. In Germany, they set off a new round of soul-searching over identity, immigration and an emboldened far right.  But the festival here in Leinefelde, in the center of the country, is telling of the quieter inroads being made by right-wing enthusiasts who preach an anti-immigrant, pro-white gospel.” (John Eligon, “Face Paint, Balloons And ‘White Power’: German Neo-Nazis Put On A Pretty Face,” The New York Times, 9/26/18)