It’s understood that the Federal Bureau of Investigation (FBI) sorts through terrorism threats daily, but these threats are changing – and multiplying. FBI Director Christopher Wray told CBS News in an interview last week that the bureau made “about 120” terror-related arrests last year alone. He explained that the number of homegrown violent extremists alone led to 1,000 of about 5,000 total terrorism investigations. The implications of those numbers are bleak, as cyber threats both new and emerging were “at an all-time high.” Pointing to the nearly 15,000 tips per year the FBI Joint Terrorism Task Force receives – or about 40 tips a day, two tips an hour – Wray summarized, “We’re safer,” but threats have now “evolved.”

To mark the 17th anniversary of September 11, Al-Qaeda’s leader, Ayman al-Zawahiri released a video speech titled, “How to Confront America?” In the nearly 25-minute video, Zawahiri laid out a series of points to win the fight against the U.S., outlining strategies to best confront the nation. He claimed that the U.S.-Al-Qaeda conflict stems from religion and antipathy towards Muslims, stating the United States is the supporter of global evil. Using cloud/server storage websites like Microsoft One Drive, OwnCloud, Dropjiffy, and Sendspace, Arabic and English text versions of the speech were uploaded for distribution online. Also, the link to the video was proliferated through the Risala.Ga website and JustPaste.It, and it was also uploaded to OwnCloud, Microsoft One Drive and others. This serves as a prime example of what FBI Director Christopher Wray explained, “Terrorism moves at the speed of social media.”

And that speed is starting to get away from social media platforms and web site providers. The U.S. Northern District of Texas case against Jordan-born Texan Said Azzam Mohamad Rahim demonstrates the startling accessibility across multiple platforms that allows extremists to promulgate and recruit other like-minded individuals. Utilizing the Austin social media application, Zello, Rahim was able to act as a moderator on a mobile phone channel where he would broadcast “incitement to mobilize killers and other kinds of direct support for ISIS.”  Terrorists are able to leverage encrypted “online safe spaces” to cloak their terror plots and incitements to kill.  In the Texas case, FBI agents became aware of social media applications used specifically by jihadists. These online platforms are allowing terrorists to operate in the shadows of the Internet – untraced – spreading their messaging worldwide.

Al-Qaeda’s leader Ayman al-Zawahiri released a speech on September 11, titled “How to Confront America?” In the approximately 25-minute address, Zawahiri stated that the conflict with the U.S. was primarily about religion and America’s antipathy towards Muslims around the globe. The al-Qaeda leader also stated that the U.S. is the supporter of global evil, specifically, in supporting the governments of Saudi Arabia, Israel, India and Pakistan; ignoring atrocities committed by the governments of Myanmar and Russia, and by destroying Iraq and allowing Iran to gain regional influence. Zawahiri also called for Muslims in North Africa, the Sahara and West Africa to fight, especially in Libya. 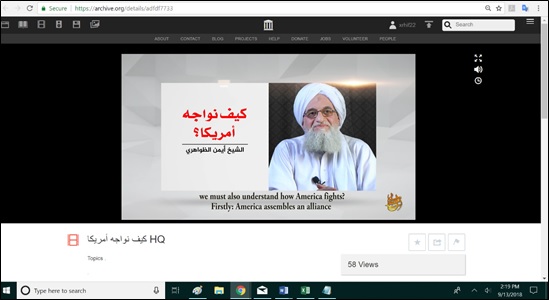 Video of the Zawahiri speech “How to Confront America?” on the Internet Archive, September 13, 2018

On September 11, ISIS released a video from their self-proclaimed Adan-Abyan state in Yemen. The video, titled “Overwhelming the Enemies #2,” shows several operations from 2016 to 2018, including the assassination of several Yemeni security personnel and the bombing of the Finance Ministry. The video includes the last statements of suicide bombers and the subsequent vehicle suicide bombings. In at least one instance, the bomber is aided by a spotter over radio. The video concludes with the execution of four men by ISIS fighters. 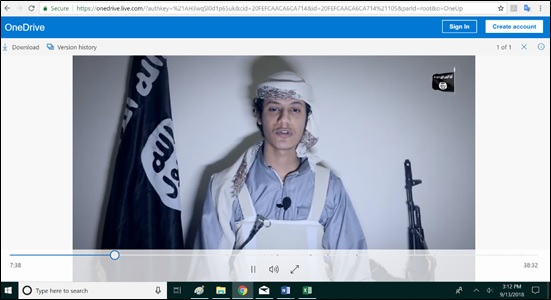 A new edition of the book Siege, by James Mason, became available on Amazon on September 10, 2018. The book advocates for a violent leaderless neo-Nazi guerilla movement and lone wolf terrorism to bring down the government. Siege is one of the most important books for the American neo-Nazi group Atomwaffen Division, whose members have killed five people since May 2017. One of the group’s founding members, Brandon Russell, was sentenced to five years in prison in January 2018 for possessing explosives.

While other infamous neo-Nazi books, such as The Turner Diaries, are also available on Amazon, they are sold through the Amazon marketplace, which is used by third party sellers. Siege however, is sold on the main Amazon site, meaning that it is in an Amazon warehouse and can be shipped via Amazon Prime. The company has previously received attention for carrying neo-Nazi materials. Amazon’s policies for their sellers prohibit “Products that promote or glorify hatred, violence, racial, sexual or religious intolerance or promote organizations with such views.” Siege Culture, a neo-Nazi propaganda group loosely affiliated with the Atomwaffen Division, promoted the Amazon re-release of Siege on their Gab account. 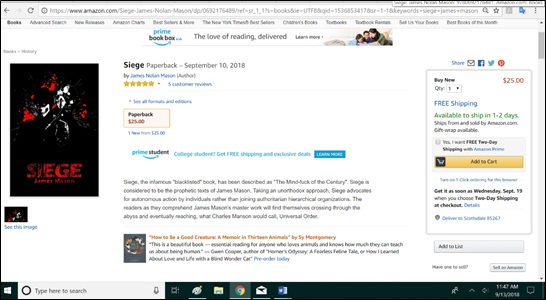 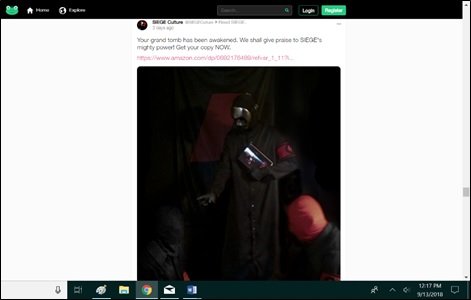 Today’s Terrorism Threat Is Everywhere, And Social Media Exacerbates It. “FBI Director Christopher Wray revealed for the first time that the bureau has made ‘about 120’ terrorism-related arrests in the last year alone. ‘We had about 1,000 investigations into just these homegrown violent extremists. That’s out of about 5,000 terrorism investigations,’ Wray told ‘CBS This Morning’ co-host Norah O’Donnell. The first portion of their multi-part interview airs Tuesday. It’s been 17 years since 9/11, the deadliest terror attack on American soil. ‘We’re safer,’ Wray told O’Donnell, but he acknowledged the terror threats have ‘evolved’ to present new challenges. He said the FBI Joint Terrorism Task Force receives ‘about 15,000’ tips a year, which works out to ‘basically 40 tips a day, two tips an hour’ … New and emerging cyber threats also contribute to the challenges. Wray said they were ‘at an all-time high.’ ‘Terrorism today moves at the speed of social media,’ he said.” (“FBI Director Christopher Wray: "Today's Terrorism Threat Is Everywhere, Coast To Coast", CBS News, 9/10/18)

Texan Put In FBI Custody After Jihadist Postings On Encrypted Social Media. “The U.S. Northern District of Texas case against the Jordan-born Texas resident Said Azzam Mohamad Rahim is one such illuminating case. Rahim is set to go on trial December 3, 2018, on six counts of lying to the FBI and one count of providing material support to ISIS. He is a U.S. citizen who owns a convenience store. The investigation centered around Rahim’s life as a moderator in the Austin social media application Zello. There, on a mobile phone channel, he would broadcast incitement to mobilize killers and other kinds of direct support for ISIS. We’ve known for a number of years that Islamic terrorists use these encrypted online safe spaces to hide their fellowship, incitements to kill, and plotting. But the Rahim case is unique in that it fully reveals the grotesque degree of venality of those who participate. FBI Special Agent Dwayne Golomb’s sworn affidavit provides some contextual background laying out how ISIS came to develop a well-oiled online machine to incite violence globally among connected, interested American sympathizers like Rahim. The agent wrote that the FBI became aware of an unnamed social media application used by jihadists to promote attacks and then executed search warrants on the application.” (Todd Bensman, “Texas Terror Case Gives Rare Glimpse Inside Encrypted Jihadist Social Media,” PJ Media, 9/7/18)