The shooting in Toronto this week by Faisal Hussain demonstrated the extent to which ISIS has mastered the use of social media and the Internet to spread its propaganda. Although authorities have stated that there was no known terrorist involvement for the incident, ISIS was quick to claim credit. Using the encrypted messaging app Telegram, it claimed that Hussain was “a soldier of the Islamic State” and “carried out the attack in response to appeals targeting nationals of the coalition countries.” Despite the assertion, ISIS did not release an additional statement, the name of the attacker or footage of the attacker making a bay’ah (pledge of allegiance) to the group.

As reported by The New York Times, ISIS’ tactics exemplify a tried and true method of “extending its reach by luring marginalized and vulnerable young men and women online.” Officials have even said that ISIS specifically targets “people who are mentally unwell.” Hussain’s family stated that he suffered from mental illnesses his entire life. Nice, France attacker Mohamed Lahouaiej Bouhlel suffered from a nervous breakdown, Orlando nightclub shooter Omar Mateen was described by relatives as bipolar and the 2014 attacker on Canadian soil Martin Couture-Rouleau needed psychiatric care. And although not all attackers can be linked to the terrorist group – ISIS notably claimed that Las Vegas shooter Stephen Paddock was “a soldier of the Islamic State” despite no proof to confirm that assertion – in many cases, evidence linking to ISIS’ involvement was typically found “especially via the app Telegram.”

In another case, it was announced Thursday that Utah teenager Martin R. Farnsworth – described by defense attorneys as a target of bullying and partially autistic – would be tried as an adult for charges of “attempted murder and using a weapon of mass destruction.” Although no connections have been found between Farnsworth and ISIS, like countless others he was radicalized by ISIS material found online. During a June preliminary hearing, an FBI agent found multiple instances of terrorist propaganda, recruitment videos and instructional bomb making materials on Farnsworth’s laptop. Farnsworth was also caught using Internet search terms such as “bomb,” “fuse,” “Hurricane,” “ISIS,” “How do westerners become recruited to ISIS,” “ISIS phone number,” and “ways to contact ISIS.”

ISIS Kills More Than 200 People In Attack On Syrian City

On July 25, ISIS suicide bombers and raids killed over 200 people in the Syrian government held city of Suweida, located in the southwest part of the country. Several suicide bombers attacked a marketplace and allegedly two would be bombers were killed before they were able to detonate their explosives. According to The Guardian, before the war, Suweida had a large concentration of Druze and the city has not participated in the civil war. In a statement following the attack, ISIS claimed to have killed 235 people and wounded more than 200 in their attacks. 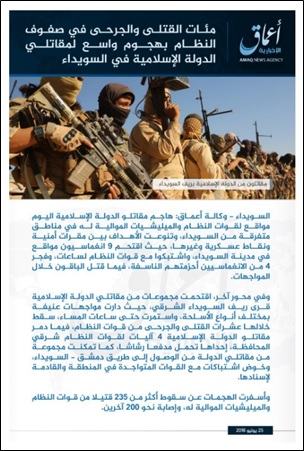 ISIS report on Suweida Attack on Telegram on July 25

On July 25, at approximately 5 AM EST, ISIS’s Amaq News Agency claimed that the Toronto shooter, Faisal Hussain, who killed two and wounded 13 on Sunday night was “a soldier of the Islamic State” and “carried out the attack in response to appeals targeting nationals of the coalition countries.” Despite the claim, ISIS did not release an additional statement, nor did they released the name of the attacker, nor did they release footage of the attacker making a bay’ah (pledge of allegiance) to the group. As of Thursday, July 26, Canadian law enforcement officials have declared “that there is no evidence to support a connection (to ISIS) so far.” Hussain’s parents have stated that he suffered from depression and psychosis. On July 25, it was revealed that Hussain died of a self-inflicted gunshot wound.  ISIS notably claimed that the Las Vegas mass shooter, Stephen Paddock, was also “a soldier of the Islamic State,” however nine months later there has been no evidence to confirm that assertion.

ISIS's claim for the Toronto shooting on Telegram, located on July 25

On Wednesday, July 25, ISIS bombed an election center in the city of Quetta, killing at least 32 people.  ISIS released claims of responsibility via their Amaq News Agency on Telegram. 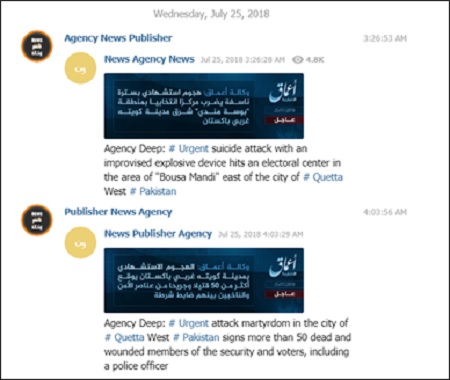 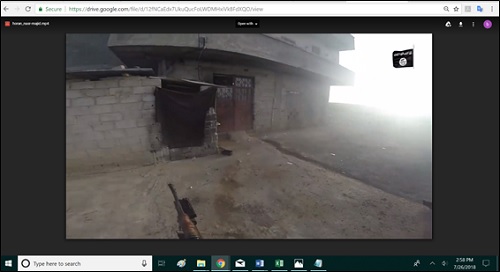 “Glorious Victory” on Google Drive, approximately 18 hours after it was uploaded

A National Action propaganda video was located on Instagram while searching the hashtag #nationalaction. The video, “Pedo Hunt Episode 1” was uploaded to Instagram over two years ago on May 21, 2016. The video has 709 views and was still up as of July 26. 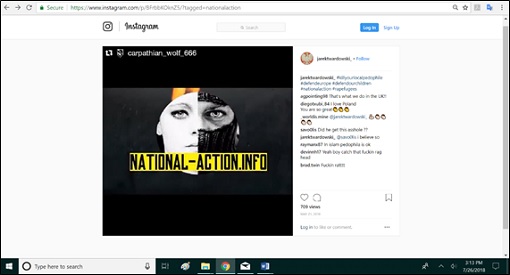 National Action video up for over two years on Instagram

Two ISIS pages, both for the group’s Amaq News Agency, were found on Tumblr. Both pages were created or activated recently and do not appear to be main conduits of information. One page had one post, while the other had two posts. Tumblr notably does not have an easy “report” feature appearing alongside content, despite having Community Guidelines that forbid content that may “encourage violence or hatred” or “(promote) terrorism.” 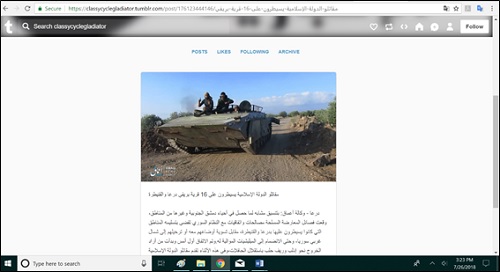 No Evidence Has Been Found Linking Toronto Shooter Faisal Hussain, Described As Having “Severe Mental Health Challenges,” To ISIS, Who Claimed Otherwise On Telegram. “Not long after Mr. Hussain’s family issued its statement, the Islamic State’s news agency put out a bulletin claiming the attacker had been inspired by the terrorist group – and reigniting a debate about whether an individual who is mentally ill can truly be said to act at the behest of a terrorist group.  ‘Our son had severe mental health challenges, struggling with psychosis and depression his entire life,’ the Hussain family said. Its statement came a day after Mr. Hussain killed a 10-year-old girl and an 18-year-old woman. No evidence has emerged to date to confirm that the young man had been inspired by the Islamic State, and on Wednesday, both Toronto’s police chief and an official with Canada’s public safety department rejected any connection to terrorism. ‘At this stage, we have no evidence to support these claims,’ said the police chief, Mark Saunders.” (Rukmini Callimachi & Catherine Porter, “Toronto Shooting Rekindles Familiar Debate: Terrorist? Mentally Ill? Both?” The New York Times, 7/25/18)

ISIS Has Proven Adept At Using The Internet And Social Media To Target The “Marginalized And Vulnerable.” “While the path that led Mr. Hussain to violence remains unclear, and his link – if any – to Islamic extremism is unknown, one thing is beyond dispute: The Islamic State is extremely skilled at extending its reach by luring marginalized and vulnerable young men and women online.  Although in many instances the group has been hands-on, closely guiding those planning terrorist attacks via encrypted messages, it also employs another strategy. It broadcasts the seeds of propaganda as broadly as possible in the hope that they will take root, and that someone – anyone – will embrace violence in its name … Some officials in countries targeted by the Islamic State, often known as ISIS, have gone so far as to suggest that the militants seek out people who are mentally unwell. Among them is Mark Rowley, who stepped down last year as chief of counterterrorism at London’s Metropolitan Police. The group, he said, is actively targeting vulnerable people, including ‘those with mental health issues.’” (Rukmini Callimachi & Catherine Porter, “Toronto Shooting Rekindles Familiar Debate: Terrorist? Mentally Ill? Both?” The New York Times, 7/25/18)

Past Attacks Have Been Performed By Those Suffering From Mental Illnesses. “After a 31-year-old man used a cargo truck to crush 86 people to death on the promenade in Nice, France, his distraught father rushed to tell reporters his son had once suffered a nervous breakdown.  When Omar Mateen used a Sig Sauer MCX semiautomatic rifle to gun down 49 people at an Orlando nightclub, relatives described him as bipolar … Among them is the Nice attack in 2016, which was carried out by Mohamed Lahouaiej Bouhlel. His father went on camera to detail the psychiatric treatment his son had received following what he said was a nervous breakdown.” (Rukmini Callimachi & Catherine Porter, “Toronto Shooting Rekindles Familiar Debate: Terrorist? Mentally Ill? Both?” The New York Times, 7/25/18)

Utah Teenager Martin Farnsworth, Described As Partially Autistic, Will Be Tried As An Adult For “Attempted Murder And Using A Weapon Of Mass Destruction.” “A Utah teenager accused of trying to blow up a homemade backpack bomb at school after looking at Islamic State propaganda online will stand trial as an adult on two felony counts, a judge decided Thursday.  Authorities have said 16-year-old Martin R. Farnsworth wanted to cause fear after viewing the propaganda. The device he is accused of bringing March 5 to Hurricane High School in St. George did not explode and no one was hurt. He is charged with attempted murder and using a weapon of mass destruction, each charge punishable by at least five years and up to life in prison, KUTV in Salt Lake City reported. Investigators found no connections between the boy and the terror group … Defense attorneys say Farnsworth was bullied and suffers from a form of autism that keeps him from understanding the effects of his actions.” (“Utah Teen Accused In Backpack Bomb Case To Face Adult Trial,” The Associated Press, 7/26/18)

Although No Connection Has Been Found To ISIS, Farnsworth Was Radicalized By ISIS Content Found Over The Internet. “Chris Andersen, a special agent with the FBI, testified that his specialty is in counter-terrorism, and he was called to investigate both incidents at the Southern Utah High Schools. ‘When a weapon of mass destruction is identified, the FBI is called out and investigates the incident in a parallel manner to local law enforcement,’ he said. The laptop and cell phone were among several items taken into FBI’s evidence to review, and Andersen testified he reviewed information another forensics examiner from the FBI had determined was pertinent to the cases. Andersen said the computer user had viewed videos of pro-ISIS propaganda and ISIS recruitment videos. He also said the user was searching various search terms like ‘bomb,’ ‘fuse,’ ‘Hurricane,’ ‘ISIS,’ ‘How do westerners become recruited to ISIS,’ ‘ISIS phone number,’ and ‘ways to contact ISIS.’  The FBI was able to see the computer’s user researched information on how to locate materials to create a bomb and viewed many instructional photos and videos online, according to Andersen.  Andersen also testified the computer user was seeking blueprints of at least 20 additional schools and locations across the state and searched online for ‘tactical knuckle gloves’ and ‘ISIS uniforms.’” (Emily Havens, “High School Bomb Case: State Lays Down Evidence To Try Teen As Adult,” St. George Spectrum & Daily News, 6/18/18)