ICYMI: What Comes After The Taliban’s Latest Takeover Of Afghanistan

(New York, N.Y.) — Last Thursday, Counter Extremism Project (CEP) Senior Director Dr. Hans-Jakob Schindler authored an op-ed in the Wall Street Journal warning against the United Nations recognizing the Taliban formally as the government of Afghanistan. Schindler asserted that doing so would open the window for an “unchecked flow of funds and investments” that could be diverted to terrorist organizations including al-Qaeda. He concluded by stating that dealing with the Taliban will require broad international cooperation:

“In the months to come, the issue of how to deal with the new regime in Kabul will be a central challenge for the U.N. The U.S. and its European allies should work to build coalitions in the Security Council and with other U.N. member nations to ensure the Taliban are not accepted into the international community as long as they harbor terrorists, disregard human rights and run one of the world’s largest drug cartels.” 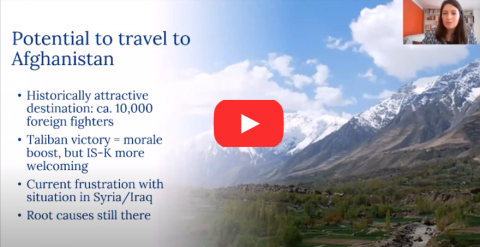 Ambassador Edmund Fitton-Brown when discussing the effects the Taliban’s takeover in Afghanistan will have in the region stated: “Drawing precise conclusions about individual regions or countries and how [nation-states in the region] might be affected by the ripple effect from Afghanistan is really difficult, but I think what we can say is this is a hugely significant moment for the evolution of the global terrorist picture, and it will need continuous monitoring.”

Sofia Koller spoke about how today there is much more insight on jihadist fighters and the negative effects the Afghanistan withdrawal will have on being able to obtain information: “We also have less access to social media which was very useful in analyzing Islamic State and we have obviously a lack of intelligence as all embassies in Afghanistan are still closed and it’s much more difficult to really get a understanding of what’s going on the ground.”

Dr. Guido Steinberg discussed how the withdrawal from Afghanistan poses new dangers from other extremist groups: “The two dangers that I see after the withdrawal from Afghanistan are the following. Danger one is the emergence of a new IS structure IS horizon that manages to control territory, possibly attract foreign fighters but then prompt followers worldwide to let the organization direct attacks. The second danger that is our alliances IS, al-Qaeda and other structures.”

U.N.-Sanctioned Taliban Stalwarts At The Helm Of New Afghan Government

On October 16, 2020, while shouting “Allahu Akbar,” 18-year-old Abdoulakh Anzorov decapitated history teacher Samuel Paty in the Paris suburb of Conflans-Sainte-Honorine. Paty had recently received death threats after showing caricatures of the Islamic Prophet Muhammad in class as part of a lesson on freedom of speech.

"Hezbollah has always tried to hide behind a veneer of respectability. But recently the veil has slipped, with the… https://t.co/T5NEXub6Ki

Nigeria’s military confirmed this week that ISWAP leader Abu Musab al-Barnawi was killed. However, the military did… https://t.co/AIdbLHhRV4

The EU insists on a false distinction. But there is no military arm vs. political arm. There is only #Hezbollah. Fo… https://t.co/HwnR7Wc5CI

RT @metpoliceuk: The murder of Sir David Amess in #Essex earlier today has now been declared as a terrorist incident, and the Met's Counter…