(New York, N.Y.) – The Counter Extremism Project (CEP) reports weekly on the methods used by extremists to exploit the Internet and social media platforms to recruit followers and incite violence. Last week, the eighth edition of the pro-ISIS web magazine “Voice of Hind” was released on multiple websites and declared to supporters that it is permissible for women, children, and the elderly to be killed in terrorist attacks. Also, ISIS released a new propaganda video, “To Be Absolved Before Your Lord 2,” through the group’s self-proclaimed Khorasan Province depicting combat footage between ISIS and Taliban forces as well as footage of slain Taliban fighters killed in action. In addition, a pro-ISIS chat on the RocketChat platform distributed approximately three dozen emails and login information for accounts with the virtual private network (VPN) service Nord.

The eighth issue of the pro-ISIS web magazine “Voice of Hind” was released on numerous websites on September 19. The magazine is meant to appeal to Muslims in the Indian subcontinent and beyond. The eighth issue contained an article arguing that it is permissible to kill women, children, and the elderly in terrorist attacks. The magazine also featured an article allegedly from ISIS supporters in the Maldives that praised Maldivians who fought in Syria and Iraq and offered advice for those still in their country of origin. Another section contained a tribute to Abu Khalid al-Hindi, one of the ISIS Khorasan members who attacked a Sikh Gurdwara in Kabul in March 2020, killing 25.

Links and pdfs were spread via Telegram, RocketChat, and Hoop. The web magazine was released on at least six websites: PasteThis.To, MediaFire, the Internet Archive, Mega.Nz, Tlgur, and Top4top. Four days later, the magazine was still available on four websites: PasteThis.To, MediaFire, the Internet Archive, and Top4top.

On September 22, ISIS released a new video titled “To Be Absolved Before Your Lord 2” via the group’s self-proclaimed Khorasan province. The footage shows combat between ISIS and Taliban forces allegedly in the Nangarhar and Kunar provinces, displays the bodies of Taliban fighters killed in action, and accuses the Taliban of working for the U.S. The video was released while the Afghan government and the Taliban negotiate in Doha, Qatar. 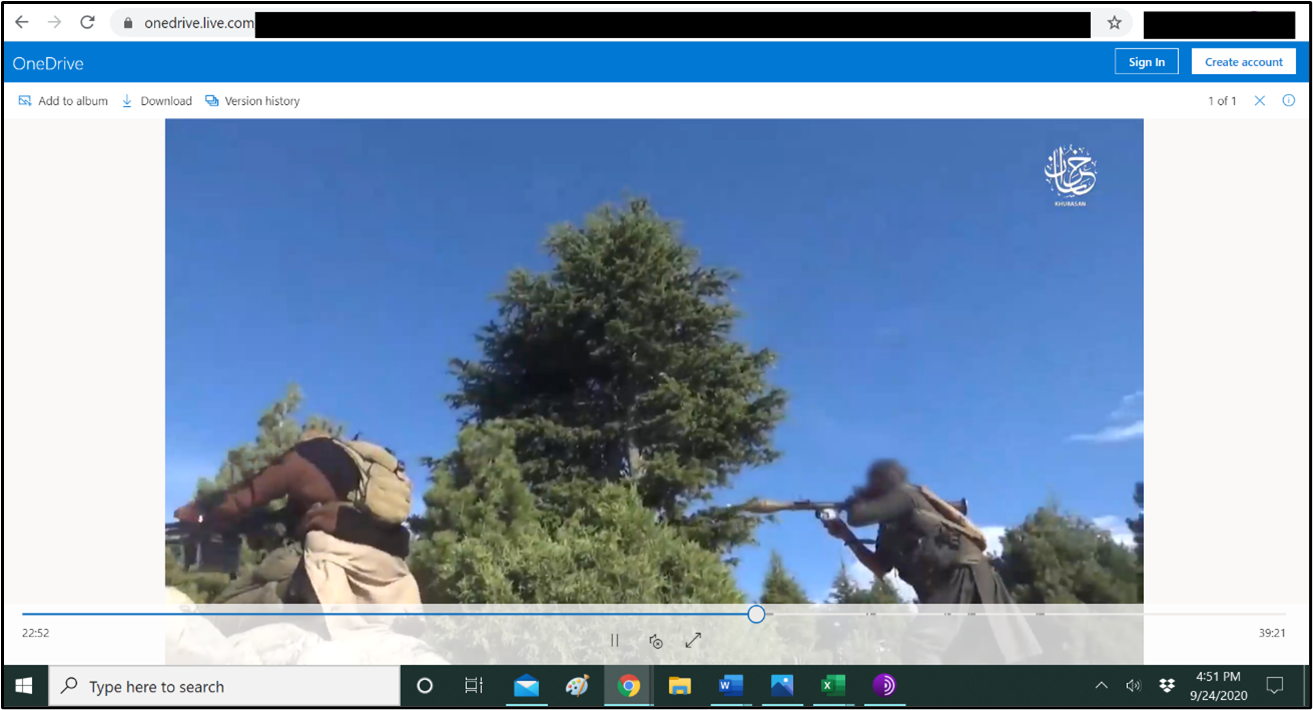 The ISIS video “To Be Absolved Before Your Lord 2” on the Microsoft One Drive, September 24, 2020

A pro-ISIS chat on the RocketChat platform distributed emails and login information for accounts with the virtual private network (VPN) service Nord. VPNs allow for individuals to shield their IP addresses in an attempt to conceal their location. The chat user posted approximately three dozen Gmail email addresses with passwords.

The International Conservative Community (ICC), a white supremacist media group, created an international campaign to rally support for Kyle Rittenhouse, who is accused of murdering two people and injuring another in a shooting during a protest in Kenosha, Wisconsin. The ICC has previously posted a large quantity of content supporting the white supremacist organization Rise Above Movement (RAM), and the various ICC accounts identified feature stylistic similarities to RAM.

The ICC has posted photos from several extreme-right groups posting flyers and hanging banners on their Instagram page, which had over 700 followers on September 24. The Instagram account included photos from Revolt Through Tradition in Massachusetts and Action Zealandia in New Zealand and supporters allegedly in Sweden, Greece, Serbia, and Colorado and Pennsylvania in the U.S. The ICC also maintains Telegram and BitChute accounts. A Telegram account that belongs to a clothing company that sells merchandise from the Rise Above Movement also posted photos from a soccer ultras group in Bulgaria showing support for Rittenhouse.

On September 23 and September 24, numerous white supremacist accounts on Telegram celebrated protests in Louisville, Kentucky over the lack of charges for police officers involved in Breonna Taylor’s death. Several accelerationist white supremacist channels expressed their hopes that there would be violence, which would further inflame tension. One channel celebrated the shooting of two police officers on the night of September 23, while another channel posted links for Telegram chats and channels belonging to anti-fascist and Black Lives Matter groups to encourage trolling and the spread of disinformation.