(New York, N.Y.) — The Counter Extremism Project (CEP) reports weekly on the methods used by extremists to exploit the Internet and social media platforms to recruit followers and incite violence. Last week, six pro-ISIS and 11 white supremacist and antisemitic accounts were found on Instagram, with the two types of accounts averaging 274 and 108 followers, respectively. There was a directory of pro-ISIS propaganda websites discovered on the Internet Archive. In addition, a pro-ISIS propaganda website on the .org domain was located. A neo-Nazi website condemned the seven-year prison sentence recently given to Kaleb Cole, an Atomwaffen Division regional leader. Finally, a Telegram channel uploaded files for 3D printing handgun suppressor components.

From January 9 to January 15, CEP found several examples of pro-ISIS, white supremacist, and antisemitic content on Instagram. Researchers located six pro-ISIS accounts, which posted content between November 2020 and January 2022. Content included a full-length ISIS propaganda video, numerous clips taken from official ISIS propaganda videos, including one that showed an execution, ISIS nasheeds, a video from the ISIS Amaq News outlet, and images from ISIS’s al-Naba newsletter. The six accounts had an average of 274 followers. Five of the six accounts were still on Instagram four days after they were reported. 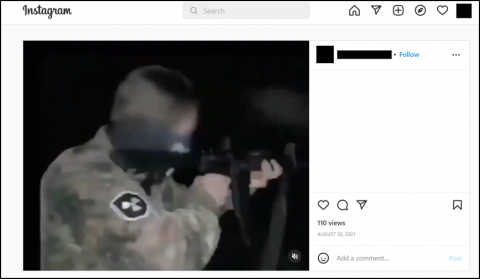 On January 12, CEP researchers located a pro-ISIS propaganda website on the .org domain. The website contained a significant quantity of ISIS propaganda, including the terrorist group’s weekly al-Naba newsletter, dozens of ISIS propaganda videos, magazines, and audio recordings. Content on the website encouraged the viewer to commit acts of terrorism. The site used Cloudflare as its name server and NameCheap as its registrar. After CEP contacted Cloudflare, the site was put on hold status and made inaccessible.

On January 11, a neo-Nazi website condemned the seven-year prison sentence given to Atomwaffen Division regional leader Kaleb Cole for his involvement in a plot to threaten journalists and advocates at the Anti-Defamation League. The site stated that Cole is a political prisoner and not responsible for his crimes, alleging that informants for law enforcement agencies were to blame. The post was advertised on Gab and 4chan.=

The website has previously advocated for acts of violence, is dedicated to spreading neo-Nazi author James Mason’s work, and contains writings by members of the National Socialist Order and several former members of the Atomwaffen Division (AWD). The site lists former AWD members, one member of the neo-Nazi group The Base, and a white supremacist imprisoned for a mail bombing as “prisoners of war.” The website uses Cloudflare as its name server. The website is allegedly selling flyers autographed by James Mason as part of a fundraiser, only accepting the privacy cryptocurrency Monero.

On January 10, a Telegram channel uploaded files for 3D printing handgun suppressor components. The file upload noted that the suppressor had been tested with two different pistol cartridges. The channel advised that the 3D printed suppressor components would have to be combined with a faux cosmetic suppressor, providing a link to purchase them from an online store that sells firearms components and accessories. On January 12, the same channel posted files for 3D printing AR-10 and AR-15 lower receivers.

The channel was created on March 17, 2021, following the deletion of a channel with an identical display name. The channel had over 350 subscribers on January 13. Telegram did not take action in June when the new channel was reported to them despite deleting a previous version of the channel, which had contained extreme right-wing references.