(New York, N.Y.) - The Counter Extremism Project (CEP) reports weekly on the methods used by extremists to exploit the Internet and social media platforms to recruit followers and incite violence. This week, a pro-ISIS group, Abd al-Faqir, released what it claims to be the last edition of the Youth of the Caliphate magazine and ISIS itself released two videos on multiple websites. Additionally, a white supremacist Telegram channel threatened synagogues and praised the Midland-Odessa shooting on August 31.

New Release of Pro-ISIS Youth of the Caliphate Magazine

On September 1, the 12th issue of the pro-ISIS magazine Youth of the Caliphate was released on Telegram and the OwnCloud cloud storage site. Youth of the Caliphate is a collaboration of five pro-ISIS groups: Sunni Shield, Al Saqri Foundation, Abd al-Faqir, Sarh al Khilafah, and Al Battar. The magazine included articles on recently released official ISIS and unofficial videos, stories about dead ISIS fighters, and information on how to contact pro-ISIS groups on Telegram. Additional magazine articles encouraged attacks by women, and accused the West of imperialist expansion in Africa, compared to ISIS’s new self-proclaimed provinces in West Africa, Central Africa, and East Africa.

On September 4, a Telegram account claiming an affiliation with the pro-ISIS Abd al-Faqir propaganda group issued a notice that production of Youth of the Caliphate magazine would cease. The group warned that any alleged future communications from Telegram or social media accounts claiming to represent the magazine are not genuine.

“Youth of the Caliphate was an attempt by online pro-ISIS groups to radicalize, recruit, and build community on the Internet. Launched last October, the online magazine solicited contributions from readers and in their own words sought to ‘raise the spirit of interaction between supporters of the Islamic Caliphate.’ If Youth of the Caliphate is truly over as Abd al-Faqir stated, it will be interesting to see if other media products or organizations are created with different branding to fill the gap.” said CEP researcher Joshua Fisher-Birch.

On September 2, ISIS released a new video from their self-proclaimed province in Iraq as part of the group’s “The Best Outcome is for the Pious” series. In the video, a speaker states that the U.S. has repeatedly failed in Iraq, and that the U.S. and its local Iraqi allies will continue to suffer personnel losses. The video shows two groups of fighters, with eight and 10 individuals respectively, who re-pledge their allegiance to ISIS’s leader Abu Bakr al-Baghdadi. 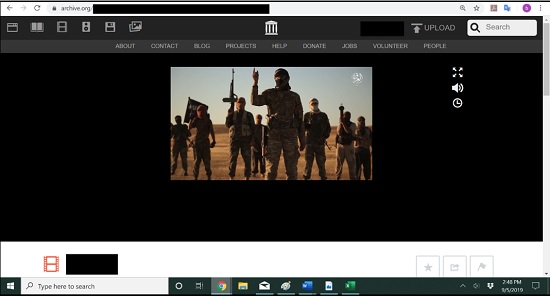 “The Best Outcome is for the Pious,” on the Internet Archive, three days after it was uploaded. September 5, 2019.

On September 2, ISIS’s Amaq Agency released a video showing an alleged ambush of a Popular Mobilization Forces vehicle near Samarra, in the Saladin governate in Iraq. In addition to Telegram, the video was uploaded to at least nine websites: Dailymotion, Amazon Drive, file.fm, tune.pk, top4top, Dropbox, Mediafire, the Internet Archive, and Mega.nz. Three days later, the video was still available on Amazon Drive and file.fm. 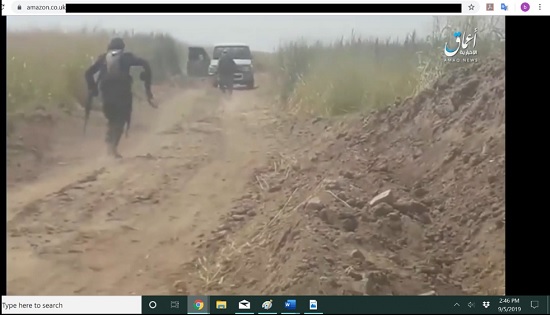 Shooting In Germany: Right-Wing Extremists Are No Lone Wolves, But An Organized Network