(New York, N.Y.) – The Counter Extremism Project (CEP) reports weekly on the methods used by extremists to exploit the Internet and social media platforms to recruit followers and incite violence. This week, ISIS’s spokesman called for attacks on Jews in an audio release. Additionally, a neo-Nazi music album was released on Dropbox that called for the murder and genocide of Jews, Muslims, and people of color.

“Tech platforms must equally and consistently apply their moderation policies against all forms of extremist activity, including ISIS and white supremacists. As demonstrated by neo-Nazi music and ISIS’s spokesman, both of whom called for violence against Jews, among others, these two groups will stop at nothing to distribute violent propaganda online,” said CEP Researcher Joshua Fisher-Birch. “Tech companies must take these threats seriously and enforce their Terms of Service regarding hate speech and extremism.”

ISIS also uploaded a new video to numerous websites that includes attacks on Iraqi security forces, the use of roadside bombs and the execution of three individuals. A neo-Nazi accelerationist Telegram channel posted instructions for converting a specific type of submachine gun to fire fully automatic. Also, a pro-ISIS website on Free Domain was located, and a pro-Hammerskin web store was located on Facebook. Finally, a pro-ISIS group posted a Spanish language explosives manual on TamTam.

On January 27, ISIS’s spokesman Abu Hamza al-Qurashi released an audio statement via the group’s Al Furqan Media Foundation. In the speech, Abu Hamza stated that the group is initiating a new phase, calling for attacks against Israel and for the group to target Jews worldwide. Abu Hamza called for Palestinians to join ISIS and condemned Hamas as ineffective. He also stated that ISIS is active in Iraq and will target U.S. allies there. ISIS’s self-declared province in Sinai declared war on Hamas in a video released in January 2018. 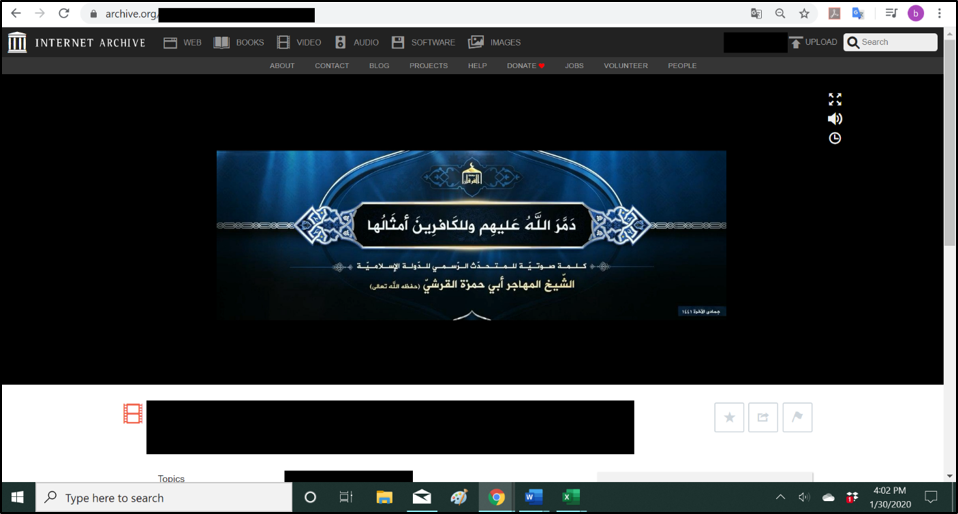 A seven-track neo-Nazi album that promotes violence was located on Dropbox. The files were uploaded to Dropbox on January 23, 2020, and features a computer-generated voice. The music contains lyrics praising a white ethno-state and encouraging the murder and genocide of Jews, Muslims, and people of color. One song contains the lyric “Heading to the synagogue with guns and bombs, who wants to place a bet and see how this turns out?” The album was spread on Telegram, where the Dropbox link had been viewed almost 700 times on February 3. The Dropbox link was also spread on a Reddit community dedicated to the group. On February 3, the subreddit, which was created in January 2012, had over 500 members.

On Friday, January 31, ISIS released a new video from their self-proclaimed Salahuddin province in Iraq. The video claims that the group is still active in Iraq and shows attacks against Iraqi security forces, including the use of roadside bombs, and an attack on a military barracks. The video also includes several executions of men accused of working with the Iraqi government, and concludes with the brutal execution of three individuals.

On Wednesday, January 29, a neo-Nazi accelerationist Telegram channel posted instructions for converting a specific type of civilian submachine gun to fire fully automatic. The information was originally posted on an unconnected Instagram account that opposes gun control, also on January 29. The conversion instructions contain photos explaining how to modify the firearm’s lower receiver with electric tools.

CEP researchers located a pro-ISIS website on a free domain administered by the company Award Space, which is registered in Germany. The website contains ISIS news and photo propaganda, as well as audio and video, and links to full length ISIS videos. Content on the site includes executions.

CEP researchers located a Facebook page for a Hungarian web store that supports the neo-Nazi skinhead group the Hammerskins. The Facebook page, created in May 2018, contains links to a Blogspot page to purchase neo-Nazi concert tickets for events in Western and Central Europe, and Hammerskin and affiliated Crew 38 support clothing. The Facebook page is updated approximately twice a week and had 608 likes on January 30. Facebook’s Community Standards prohibit groups involved in “organized hate” and “organized violence or criminal activity” from having a presence on the platform. Facebook previously removed two pages for the Hammerskins in Finland and Sweden. Hammerskin members have a history of violence, including the August 5, 2012 attack on a Sikh Gurdwara in Oak Creek, Wisconson, where six people were murdered and three were critically wounded.

The pro-ISIS Spanish language Muntasir Media posted an explosives manual on the TamTam platform. The instructions were taken from the al Qaeda in the Arabian Peninsula (AQAP) magazine Inspire and translated into Spanish. The manual was also posted on Top4top. Muntasir threatened Spain in November 2019, and has previously threatened a Spanish judge.

CEP Cryptocurrency Study Findings to be Presented at March 25 Event in Berlin, Germany

Shooting In Germany: Right-Wing Extremists Are No Lone Wolves, But An Organized Network