Thirteen accounts containing extremist propaganda for terrorist and extremist groups, including ISIS, Tehrik-i-Taliban Pakistan (TTP), and a New England-based neo-Nazi group, were located on Facebook over the course of the past week, with content including photographs, videos, and audio files. Additionally, a page for a neo-Nazi record label was located, advertising shirts with symbols such as swastikas and black suns/sonnenrads.

The extremist and terrorist content found by CEP researchers on Facebook are clear violations of the platform’s terms of service, yet it often fails to be removed. Approximately 36 hours after CEP reported the thirteen accounts, only two were removed. CEP encourages Facebook to take concrete action regarding the misuse of its site, including by providing Meta’s Oversight Board with access to any and all information related to its inquiry; bringing on external experts with core computer science skills, such as U.C. Berkeley professor and CEP Senior Advisor Dr. Hany Farid, onto the Oversight Board; and integrating Oversight Board members into its corporate board. Meta is responsible for the extremist content on its platforms, and it must begin to act as such.

CEP researchers located 10 accounts that posted ISIS and pro-ISIS propaganda. Pro-ISIS profiles posted full-length ISIS propaganda videos, clips from longer videos, including footage showing casualties from ISIS attacks, unofficial videos supporting ISIS, photos taken from propaganda videos, and ISIS audio files. One account used an image taken from a notoriously brutal ISIS video from 2016 as its profile photo. Three accounts had an undisclosed number of friends or followers. The other seven accounts had a range of 188 to 3,700 friends, with an average of 1,195. In addition to the 10 pro-ISIS accounts, CEP located an account that celebrated the killing of Pakistani police officers and posted videos from the Tehrik-i-Taliban Pakistan (TTP) propaganda outlet Umar Media.

Two pages were also found that posted neo-Nazi propaganda. With over 400 followers, the first page, a propaganda outlet, posted a recent video made by the Nationalist Social Club (NSC) and social media and contact information for the group. The post indicated support for NSC’s actions. The second page, with over 900 followers, belonged to a neo-Nazi record label and advertised the sale of t-shirts with neo-Nazi symbols such as black suns/sonnenrads and swastikas. The uploader partially covered some of the swastika imagery to avoid removal from Facebook.

CEP reported all thirteen accounts to Facebook on July 27. Approximately 36 hours later, two accounts were removed: the pro-TTP account and a pro-ISIS account that posted a clip from an ISIS propaganda video that showed combat casualties. 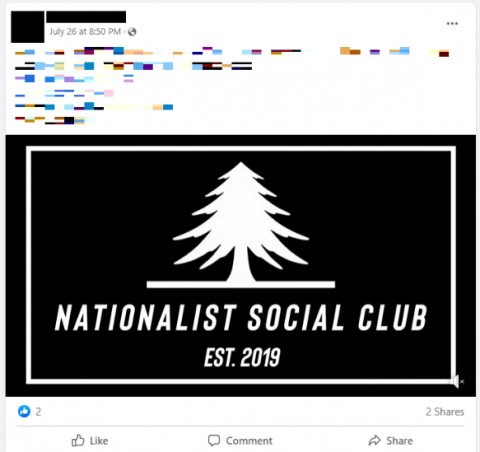