(New York, N.Y.) – The Counter Extremism Project (CEP) reports weekly on the methods used by extremists to exploit the Internet and social media platforms to recruit followers and incite violence. Last week, users of an 8chan successor site detailed a plot to target and harass the Zoom classes of students at a Jewish day school in Philadelphia, and encouraged other users to participate. Additionally, al-Qaeda issued a statement declaring the novel coronavirus to be a divine punishment that has “exposed the brittleness of a global economy dominated by the United States,” while ISIS released a new propaganda video from Syria showing combat footage and prisoner executions. Also, CEP identified a video created by neo-Nazi James Mason in which he urged his viewers to follow biblical prophecies and praised Hitler, additionally a neo-Nazi accelerationist Telegram channel that advocates for violence posted links to a non-affiliated group that offers instructions on how to build a pistol with 3D printed components. Finally, four Atomwaffen Division (AWD) videos were reuploaded to YouTube from an account linked to an AWD supporter group on Telegram.

Users on the 8chan successor website posted Zoom links and the online class schedule for a Jewish day school in Philadelphia, encouraging anti-Semitic targeted harassment on April 1. The board where the post was made frequently shares racist, anti-Semitic, and white supremacist content. The 8chan successor website uses Vanwanet as its name server and Eranet as its registrar. Posters on the same board have praised the Christchurch terrorist Brenton Tarrant, and similar attacks in Poway, California, and El Paso, Texas.

“8chan’s successor website continues to serve as a go-to online gathering place for users to incite violence and spread racist, anti-Semitic rhetoric and extremist ideologies,” said CEP researcher Joshua Fisher-Birch. “As more people have switched to virtual meetings, far right extremists have also adapted their harassment and intimidation campaigns to these settings. Web companies should cease providing services to sites where this kind of behavior is planned and encouraged.”

On March 31, al-Qaeda released a statement declaring that the novel coronavirus is divine punishment that has “exposed the brittleness of a global economy dominated by the United States.” The release delares that now is the time for Muslim societies to embrace piety and repent. Al-Qaeda also called for people in the West to convert to Islam, and criticized the U.S. for global military operations. The statement also points out the “callousness” of Western leaders, stating that they “are least concerned about the health of the societies they are responsible for,” pointing out shortages of personal protective equipment and money spent on “imperialist, expansionist cravings” instead of medical supplies as evidence. The statement was posted on a website that uses Cloudflare as its name server and Tucows as its registrar.

On March 31, ISIS released a new propaganda video from the group’s self-proclaimed province in Homs, Syria. The video shows combat between ISIS and Syrian regime forces, and includes attacks on Syrian armored units. The video includes numerous executions of prisoners, and concludes with the execution of two men using explosives, and one with an anti-aircraft cannon.

In addition to Telegram, the video was released on approximately 13 websites: Mega.nz, Mediafire, the Microsoft One Drive, Amazon Cloud, the Internet Archive, mail.ru, file.fm, Top4top, Nextcloud, ok.ru, Tune.pk, Dropbox, and Yadi.sk. Approximately 48 hours later, the video was still available on five websites in addition to Telegram: Mediafire, file.fm, Top4top, Nextcloud, and Yadi.sk. Links to the video were spread via Telegram, Telegra.ph, and RocketChat.

CEP researchers located a video made by neo-Nazi James Mason, the author of Siege, who argued for his followers to embrace end times theology. Mason declared that Adolf Hitler was the Biblical prophet Elijah, and that at present “we are living in the age of Satan.” Mason went on to declare that inequality is ordained by God, and that democracy and societies built on equality are unnatural and Satanic. Addressing his followers, Mason told the audience not to commit violent acts against the government because of the high likelihood of being caught, and that it was not worth “sacrificing yourself needlessly.” The video was uploaded to a “free speech” streaming platform based in the United Kingdom.

In a podcast in September 2019, Mason walked back his previous support for violence, stating that he never “urged or advised” any unlawful activities. Mason’s book Siege calls for violence against the U.S. government and racial and religious groups, and has helped inspire several violent extremist groups including the Atomwaffen Division and The Base.

On March 30, a neo-Nazi accelerationist Telegram channel that advocates for violence shared links to a non-affiliated website with instructions for making a pistol with 3D printed components. The Telegram channel has over 5,000 subscribers. The same channel has previously shared similar links containing instructions for making 3D printed firearms.

Four Atomwaffen (AWD) Division propaganda videos were uploaded to YouTube on March 25 and located on March 30. The videos had over 200 combined views. The account that uploaded the videos, which advocated for violence against Jews in their YouTube “about” section, is linked to a Telegram channel which claims to be an AWD supporter group, despite AWD’s claim to have disbanded. The videos were removed shortly after they were located on March 30th. CEP researchers have found numerous examples of AWD propaganda that have been reuploaded to YouTube, despite being previously removed. YouTube claimed to have banned AWD videos in February 2018, however there is no evidence that the platform has added the group’s videos to their upload filters. 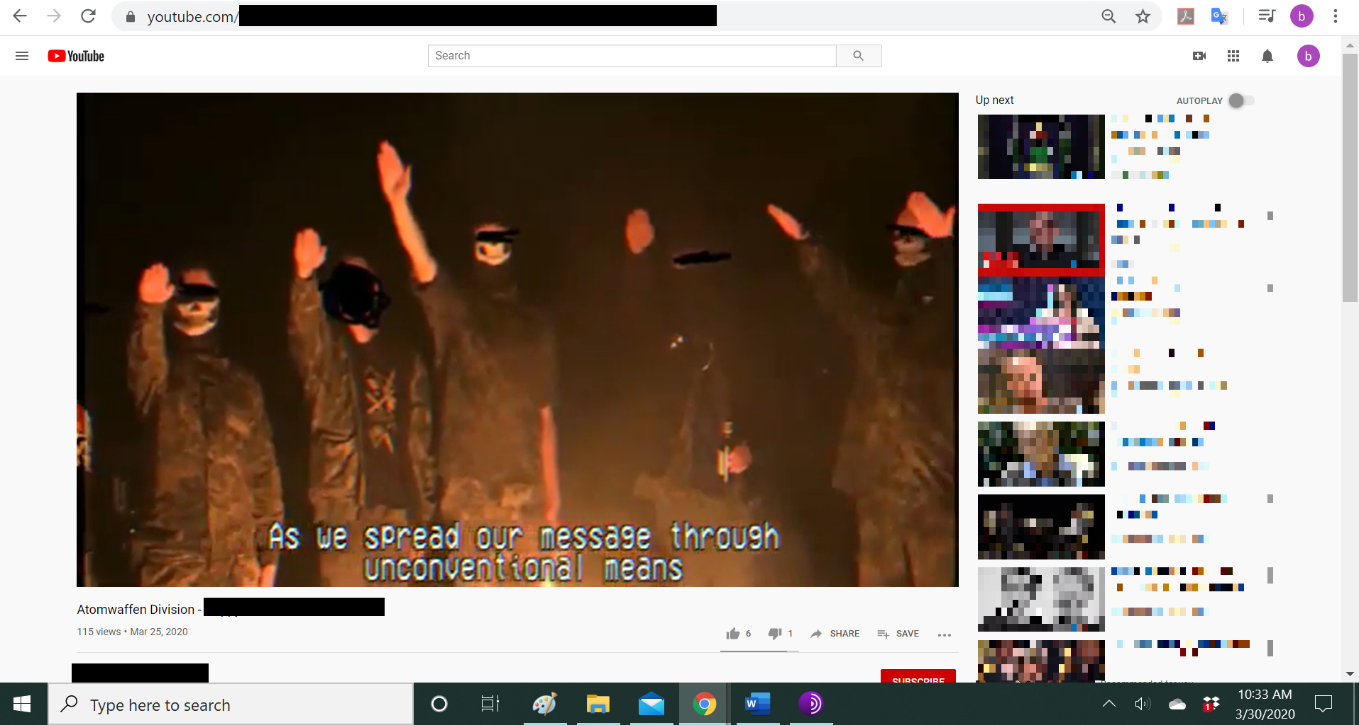 Atomwaffen Division video on YouTube five days after it was uploaded, March 30, 2020.