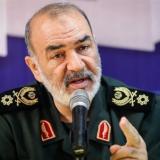 Hossein Salami is the commander-in-chief of the Islamic Revolutionary Guard Corps.

Salami joined the IRGC upon the outbreak of the Iran-Iraq War in September 1980. That year, he joined the IRGC’s Isfahan branch and fought against Iraq from Iranian Kurdistan. He was promoted to commander and led the Karbala and 14th Imam Hussein divisions before taking command of the naval Nouh headquarters. Following the end of the Iran-Iraq War, Salami completed a master’s degree in defense management at the staff college of Islamic Republic of Iran Army. He went on to serve as head of operations at the IRGC Joint Staff from 1997 to 2005.Ali Alfoneh, “Picking a new IRGC commander from the old guard,” The Arab Weekly (London), April 28, 2019, https://thearabweekly.com/picking-new-irgc-commander-old-guard.

Salami is known for taking a hard line against Iran’s adversaries, particularly the United States and Israel. He has warned that Iran remains vigilant of its enemies’ plots and Iranian deterrence has forced the country’s enemies to change their strategies.“IRGC vigilant towards enemy plots: Commander,” Islamic Republic News Agency, September 15, 2015, https://en.irna.ir/news/81760617/IRGC-vigilant-towards-enemy-plots-Commander. After a January 2019 Israeli strike against Iranian targets in Syria, Salami said on Iranian television that Iran’s strategy is to wipe “the Zionist regime” off the political map.Parisa Hafezi, “Khamenei names new chief for Iran’s Revolutionary Guards,” Reuters, April 21, 2019, https://www.reuters.com/article/us-iran-guards/khamenei-names-new-chief-for-irans-revolutionary-guards-idUSKCN1RX0JN. He has also predicted the collapse of the Saudi government.“Saudi Arabia to collapse over ‘sectarian’ policies: Iranian general,” Tehran Times, January 9, 2016, https://www.tehrantimes.com/news/252067/Saudi-Arabia-to-collapse-over-sectarian-policies-Iranian-general.

Salami has boasted of Iran’s military and strategic power. He has declared that Iran has become a regional power and is on the verge of becoming a world power.“IRGC General: Iran Becoming A World Power,” Tasnim News Agency, March 7, 2019, https://www.tasnimnews.com/en/news/2019/03/07/1963512/irgc-general-iran-becoming-a-world-power. Salami has also stated his belief that Western hegemony over the Muslim world has ended and the Western powers face “dooms day,” having failed to curb Iran’s rise to power.“IRGC commander: Collapse of Western hegemony,” Islamic Republic News Agency, October 14, 2015, https://en.irna.ir/news/81799342/IRGC-commander-Collapse-of-Western-hegemony. Salami has in the past welcomed the prospect of military conflict with both the United States and Israel.Michael Segall, “Iran’s New Revolutionary Guards Commander Threatens the U.S. and Israel,” Jerusalem Center for Public Affairs, April 24, 2019, http://jcpa.org/irans-new-revolutionary-guards-commander-threatens-the-u-s-and-israel/#sdendnote6sym; “Thousands rally in Iran on al-Quds day,” Al Jazeera, July 1, 2016, https://www.aljazeera.com/news/2016/07/thousands-rally-iran-al-quds-day-160701140624059.html. After a February 13, 2019, car bombing killed 27 IRGC members in Iran, Salami declared that Iran would “break” the United States, Israel, and Saudi Arabia. He stated that the United States had already been defeated, while Israel was struggling to survive. According to Salami, Iran has “plans to defeat the world powers.”“Iran official warns Gulf countries of uprising if they continue to rely on the US,” Al Arabiya, March 3, 2019, https://english.alarabiya.net/en/News/middle-east/2019/03/03/Iran-official-warns-Gulf-countries-of-uprising-if-they-continue-to-rely-on-the-US.html.