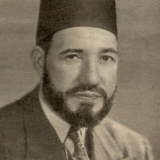 Hassan al-Banna (1906-1949) was an Egyptian schoolteacher, an Islamic theologian, and the founder of the Muslim Brotherhood.

Hassan al-Banna (1906-1949) was an Egyptian schoolteacher, an Islamic theologian, and the founder of the Muslim Brotherhood. He was a contemporary of Islamist ideologues Sayyid Qutb and Abul Ala Maududi, whose theories have helped form the violent Islamist ideology known as Qutbism.

As a young schoolteacher, al-Banna taught in the Suez Canal town of Ismailia, Egypt. He became increasingly angered by Western influence and morals, which he saw as a threat to Islam. To counter secularism and the modernization of Egypt, al-Banna began practicing dawa, proselytizing to young Egyptians with the message of returning to the early traditions of Muslim piety. He rejected the phenomenon of nationalism and instead espoused an ideology of pan-Islamic unity, marrying faith and nationalism in the hope of erecting an Islamic caliphate.Tarek Osman, Egypt on the Brink, (New Haven: Yale University Press: 2013); “Hassan al-Banna and his political thought of Islamic Brotherhood,” Ikhwanweb: The Muslim Brotherhood’s Official English web site, last modified May 13, 2008, http://www.ikhwanweb.com/article.php?id=17065.

In the 1940s, al-Banna formed the Brotherhood’s underground military wing, the “secret apparatus,” which focused its attacks on British rule in Egypt and Jewish presence in Palestine. He promoted jihad and what he called the “art of death,” reminding Brotherhood members of the Prophetic saying that “He who dies and has not fought and was not resolved to fight, has died a jahiliyya [non-Muslim, ignorant, or pagan] death.”Omar Ashour, “Myths and realities: The Muslim Brothers and armed activism,” Al Jazeera, August 12, 2014, http://www.aljazeera.com/indepth/opinion/2014/08/myths-realities-muslim-brothers--20148129319751298.html; “Profile: Egypt's Muslim Brotherhood,” BBC News, December 25, 2013, http://www.bbc.com/news/world-middle-east-12313405; “The Muslim Brotherhood: Understanding its Roots and Impact,” Foundation for Defense of Democracies, accessed September 10, 2015, http://www.defenddemocracy.org/the-muslim-brotherhood-understanding-its-roots-and-impact/.