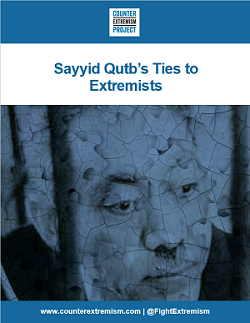 Often referred to as the father of modern Islamism, Egyptian author Sayyid Qutb was a lead theologian of the Muslim Brotherhood in the mid-20th century. Qutb’s hardline interpretations of the Quran and his excoriation of the failures of Western society inspired the modern jihadist movement and led the Egyptian government to execute him in 1966. His influence can be seen in violent groups such as al-Qaeda, ISIS, and the Taliban, and among such notable extremists such as Osama bin Laden, Abu Bakr al-Baghdadi, and Khalid Sheikh Mohammed. Terrorism expert Paul Berman at one point dubbed Qutb “the intellectual hero of every one of the groups that eventually went into Al Qaeda, their Karl Marx (to put it that way), their guide.”Paul Berman, “The Philosopher of Islamic Terror,” New York Times, March 23, 2003, https://www.nytimes.com/2003/03/23/magazine/the-philosopher-of-islamic-terror.html.

Qutb’s writings helped inform the Islamist ideology known as Qutbism, which advocates violent jihad—including the killing of secular Muslims—in order to implement sharia (Islamic law). Qutb argued that Muslim societies living under secular Muslim governments existed in a state of jahiliyya, the state of ignorance that existed prior to the revelation of the divine message of the Islamic prophet Muhammad. According to Qutb, this affliction could only be corrected by the implementation of sharia, brought about by offensive jihad and the killing of secular state officials.Dale C. Eikmeier, “Qutbism: An Ideology of Islamic-Fascism,” Parameters: The US Army War College Quarterly 37, no. 1 (Spring 2007), 89, http://www.dtic.mil/dtic/tr/fulltext/u2/a485995.pdf.

Qutb’s writings speak directly to violent jihadists, but Egyptian President Gamal Abdel Nasser recognized the extent of Qutb’s influence in Egypt. Though Nasser ultimately oversaw Qutb’s arrest and execution, he unsuccessfully tried to have Qutb released and even offered him a government position. Prior to Qutb’s execution by Egyptian authorities, he told his sister, “My words will be stronger if they kill me.”Lawrence Wright, The Looming Tower (New York: Random House, 2011), 36-37. Indeed, Qutb’s words have far outlived him and influenced many of the world’s most violent terrorists. While studying at university in Saudi Arabia in the late 1970s, a young Osama bin Laden read Milestones and other works by Qutb, which helped inspire bin Laden on a path to becoming the world’s most notorious terrorist.Lawrence Wright, The Looming Tower (New York: Random House, 2011), 91. Other top al-Qaeda figures such as Ayman al-Zawahiri and Khalid Sheikh Mohammed also devoured Qutb’s writings and credited him with creating their passions for violent jihad. According to Zawahiri, “Sayyid Qutub’s call for loyalty to God’s oneness and to acknowledge God’s sole authority and sovereignty was the spark that ignited the Islamic revolution against the enemies of Islam at home and abroad.”Thomas R. Mockaitis, The “New” Terrorism: Myths and Reality (Westport: Greenwood Publishing Group, 2008), 64. According to a founding member of the Egyptian jihadist group al-Gama’a al-Islamiyya, “Qutb has influenced all those interested in jihad throughout the Islamic world.”Robert S. Leikin and Steven Brooke, “The Moderate Muslim Brotherhood,” New York Times, April 23, 2007, https://archive.nytimes.com/www.nytimes.com/cfr/world/20070301faessay_v86n2_leiken_brooke.html. Milestones remains in print and available online and through Islamic booksellers. It was one of five radicalizing books found in British prisons in a 2016 report by CEP advisory board member Ian Acheson.Sajid Iqbal and Noel Titheradge, “‘Extremist’ books remained in prisons despite warning,” BBC News, July 28, 2020, https://www.bbc.com/news/uk-36774358.

CEP has documented 37 extremist entities linked to or influenced by Qutb.