You may be a notorious terrorist financier, but you can still use Instagram to raise money. At least that’s the case for U.N.-sanctioned Hajjaj bin Fahd al Ajmi, one of several Gulf-based donors to have funneled millions to al-Qaeda’s affiliate in Syria. Despite being sanctioned, Ajmi is still able to use Instagram to fundraise and win ad sponsorship deals, publishing more than 1,000 posts to more than 1.7 million Instagram followers. This status quo is unacceptable: Instagram needs to shut Ajmi down.

Ajmi has been sanctioned by the United Nations, United States, United Kingdom, and European Union for financing al-Qaeda’s Syrian affiliate, the Nusra Front (also known as Jabhat Fateh al-Sham). The Kuwaiti-based sheikh is particularly adept at using social media as a fundraising platform. In 2012, he launched a fundraising campaign on Twitter to finance unspecified jihadist groups in Syria, raising hundreds of thousands of dollars and reportedly providing groups with weapons and other material support. The following year, Ajmi used Twitter and YouTube to solicit funds for an August 2013 militant offensive in Latakia, Syria, in which jihadist groups including the Nusra Front and ISIS massacred several hundred civilians. Human Rights Watch named Ajmi as one of the offensive’s “most prominent donors.” Nonetheless, Ajmi has used Instagram in recent years to actively solicit donations for terrorist-affiliated charities and has even received money through sponsored posts.

Through his Instagram posts, Ajmi has urged donations to terrorist-linked charities, such as Mercy International (depicted below), an organization accused of facilitating al-Qaeda’s 1998 embassy bombings in Kenya, and the Islamic International Charitable Organization, an organization with reported ties to Hamas. As in the example below, his posts frequently exploit the plight of victims in the Syrian civil war, highlighting the suffering of children to elicit sympathy and—most importantly—financial support. 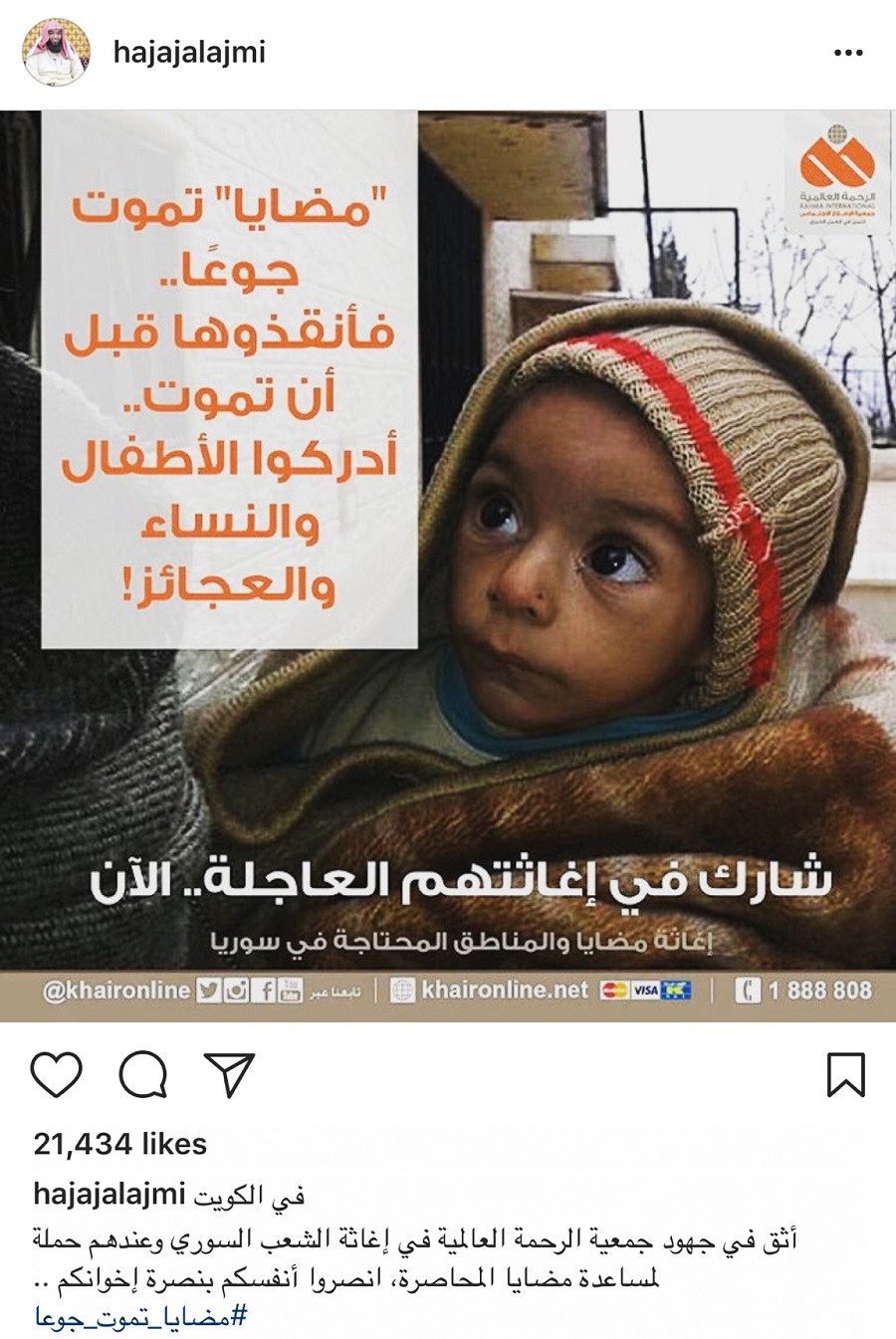 On his Instagram account, Ajmi also posts advertisements for goods and services such as restaurants, real estate investments, and cars. Ajmi has publicly admitted to receiving sponsorship payments from these ads, which has helped him overcome the financial challenges of being widely sanctioned, according to the Wall Street Journal. 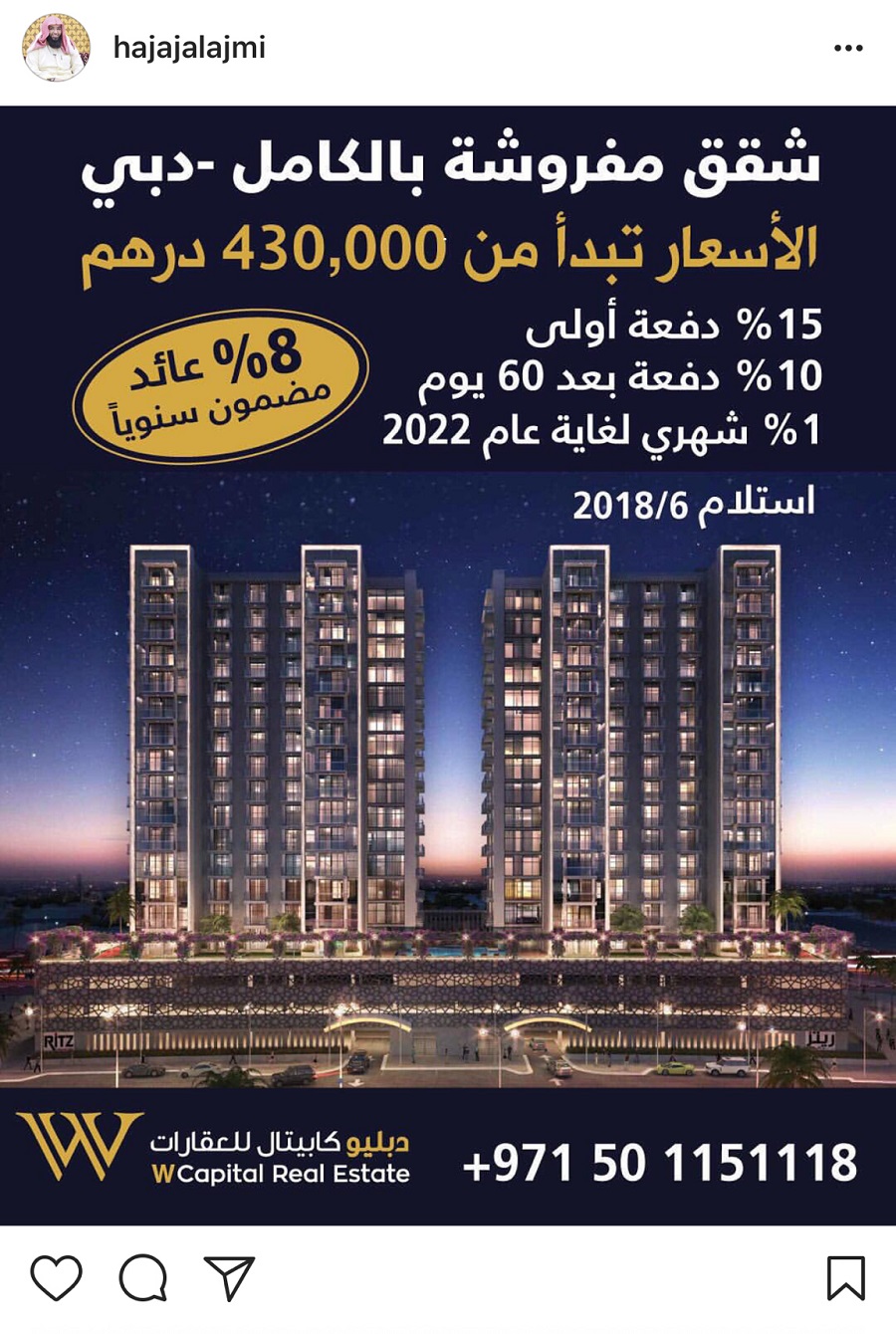 On first glance, it may seem like an oversight that Instagram has allowed an internationally-sanctioned terrorist financier to use its platform to fundraise for himself and for terrorist-affiliated charities. However, as a for-profit company (parent company: Facebook), Instagram has a financial incentive for   keeping Ajmi—with his 1.7 million followers—on its platform.

This should not be allowed to continue. On Instagram, Ajmi does not make any attempt to conceal his identity––or his status. In Arabic, his profile states his name in full (Hajjaj bin Fahd al Ajmi). In reference to a new terrorist designation by several Gulf countries, his description for several weeks read, “Not a terrorist. A new clip concerning the terrorist designation in the joint announcement” and directs the reader to a YouTube video entitled “Hajjaj al-Ajmi is not a terrorist.” 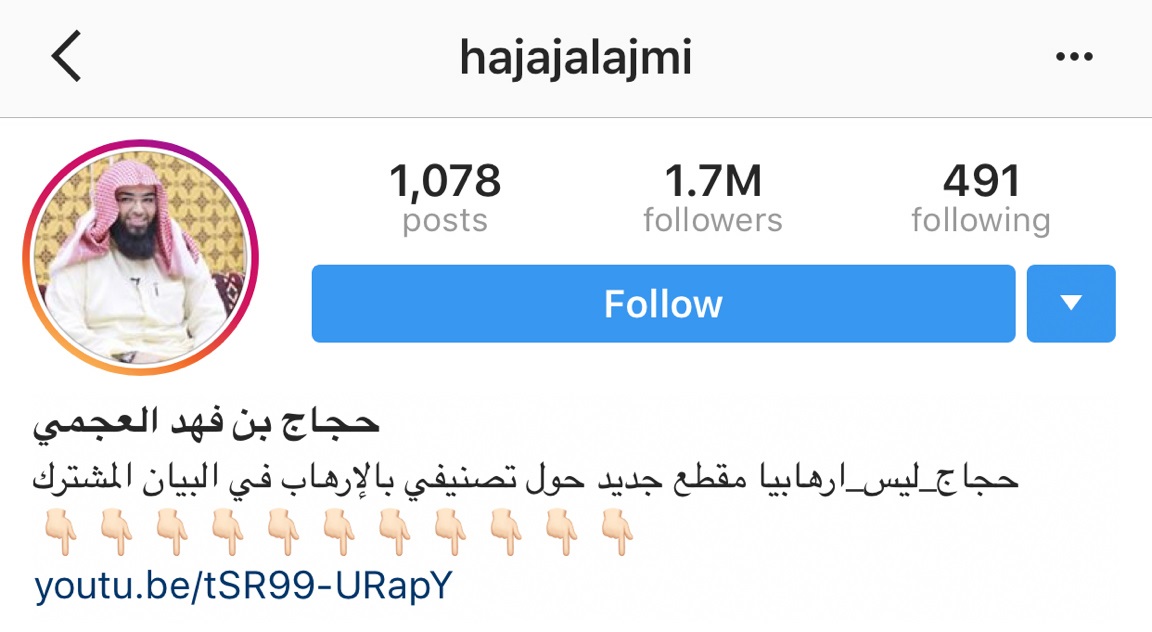 It is unconscionable that Facebook, Instagram’s parent company, allows a U.N.-designated terrorist like Ajmi to remain active, let alone use the platform to solicit donations for terrorist-linked charities and as a business opportunity for himself. Instagram’s Community Guidelines asserts that it is not a platform used to “support or praise terrorism.” Its parent company, Facebook, similarly claims that “social media should not be a place where terrorists have a voice. We want to be clear how seriously we take this.” And yet, it remains the case that Instagram is allowing an internationally-sanctioned al-Qaeda terrorist financier to run rampant on its platform, raising money for himself and other terrorist-linked actors.

It’s time for Facebook prove its “seriousness” and crack down on terrorist financing carried out in plain view on its platforms. It’s time to shut down Ajmi.