Google has touted its Redirect Method Pilot Program, which aims to steer individuals searching for ISIS-related content on YouTube toward counter-narrative materials, as an effective way to combat its platform’s problem with online radicalization.

The success of counter-narrative campaigns is frequently measured by the number of individuals who view or click on videos––the same metrics commonly used in evaluating the impact of online advertising efforts. Although the Redirect Method has been deemed successful by Google using this standard, a closer examination of counter-narrative videos on YouTube tells a different story, casting doubt on whether the program is capable of changing the minds of individuals in danger of being radicalized by extremist ideology proliferating online.

In April 2018, CEP reviewed 710 videos on YouTube found by searching keywords and phrases associated with Islamic extremism. In that entire sample, CEP found only 15 videos that could constitute counter-narrative messaging. One was an Arabic-language video uploaded by the U.S. Department of State in 2013 entitled––in Arabic––“The Islamic State of Iraq and the Sham (Daesh) is presented to you.” The video has attracted a significant amount of attention, with 141,821 views as of April 18, 2018. However, nearly all of its 82 comments feature obvious pro-ISIS rhetoric, and several point out the fact that the account that uploaded the video––which is marked as verified––blatantly features the U.S. State Department’s logo as its icon. Furthermore, the video description clearly states that the channel “is a public service provided by the U.S. State Department that seeks to educate people…about the dangers posed by violent extremist groups,” and the YouTube channel itself features a banner decked out in red, white, and blue and well-known American landmarks such as the Capitol building and Statue of Liberty.

The text in these screenshots were automatically translated from Arabic to English using a Google Translate browser extension.

The U.S. State Department’s counter-narrative videos have been criticized before for their inability to effectively refute ISIS’s narratives. While this is undoubtedly a significant problem, the videos are designed for failure from the outset––no matter the actual messaging they contain––due to their obvious counter-narrative agenda and affiliation with the U.S. government. Individuals interested in ISIS––which regularly scorns the United States in its own propaganda––are unlikely to consider the U.S. government itself to be a credible counter-narrative source. If an individual somehow misses the mention of the U.S. State Department in the video description, the use of “Daesh”––a derogatory term for ISIS––in the video title, the check mark next to the account name, and the American eagle on the account icon, a quick scroll into the comments section will point out many of these silly mistakes made by the “apostates” and “infidels” who crafted the video.

YouTube comments from a U.S. Department of State counter-narrative video. The text in these screenshots were automatically translated from Arabic to English using a Google Translate browser extension.

CEP also found three counter-narrative videos produced by the International Center for the Study of Violent Extremism (ICSVE). These videos, which often feature interviews with former ISIS fighters, are a little better disguised, with titles and thumbnails that make them look like extremist videos in an attempt to get individuals to watch them. Deferential terms like “ad Dawlah” are used to describe ISIS instead of derogatory ones like “Daesh,” and no American symbols are blatantly on display. However, some feature ICSVE’s logo––with its name in full––stamped in the upper right-hand corner. 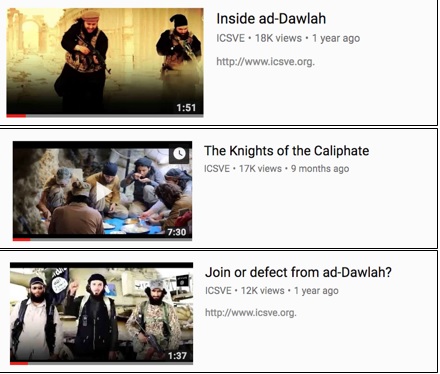 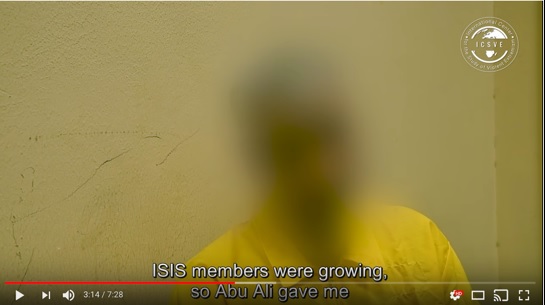 Individuals are still not fooled by these videos. The first comment that appears on a video entitled “Inside ad-Dalwah” simply states “fake video,” and has 11 likes. Other comments on ICSVE videos leave insults or ISIS slogans such as “baqiyah” (“remaining”). There are very few neutral or anti-ISIS comments, and most videos have more down-votes than up-votes.

It is possible that some of these counter-narrative videos have managed to dissuade individuals from joining or supporting extremist groups, but those users are simply not leaving comments like, “Great video, really changed my mind!” However, the current comments are more than just evidence that many of the individuals who actually view these offerings are not influenced by them in the manner intended. The comments  may undermine the credibility of the counter-narrative message itself. On the same page intended to provide a counter-narrative video, any individual who scrolls down to the comments section is suddenly presented with a multitude of interactive pro-ISIS propaganda to peruse and participate in. Any individual with a YouTube account can immediately join in on praising ISIS and bashing the “infidels” who uploaded the videos.

Furthermore, many of the comments suggest some of the fundamental challenges with counter-narrative content itself. The U.S. State Department continues to churn out counter-narrative videos on its Arabic-language “team of electronic communications” account in 2018. All of these videos are uploaded by a verified YouTube account with the State Department logo for its icon and a slew of American symbols on its channel banner. ICSVE has also published nine counter-narrative videos this year, as of April 2018, all of which have its logo stamped in the corner. Individuals may click on a counter-narrative video due to a click-bait-styled title or an attractive thumbnail, but they are not clueless, and they are going to pick up on the obvious agenda of these messages. As one commenter wrote on an ICSVE video, “Lol Fake soldier and Paid Video! we are not Belind! [sic].”

Individuals clearly do not appreciate thinking they can be fooled by overly simplified and obviously targeted messages, much less by those posted by accounts decked out in American insignia. It may be difficult to creatively refute ISIS’s attractive narratives, but tech companies, governmental, and non-governmental organizations alike might find it useful to read the feedback to the counter-narrative content they’re promoting before declaring success based on only click rates. It’s right there in the YouTube comments section.

On May 22, 2019, al-Shabaab fighters detonated a car bomb at a security checkpoint near the presidential palace in Mogadishu, Somalia, killing at least nine people and injuring 13 others.

“...East Africa, the Sahel, and West Africa have witnessed a declining security environment in parallel with an unp… https://t.co/gSeWZYad9A

11 soldiers were killed and nearly two dozen injured by jihadists targeting a military base in eastern Burkina Faso… https://t.co/Kh9cjI39uU

Clips of the racist attack in Buffalo spread online as expected, some of it filtered out by tech’s AI or human mode… https://t.co/pkuPcoV40X