In June 2010, Bloc Identitaire held a pork sausage party in Paris at the Arc de Triomphe. The event, which was originally planned to take place outside of a mosque, was moved after police banned the group from rallying outside of the mosque on grounds of maintaining public order. An estimated 7,000 people registered to attend through Facebook.* Robert Marquand, “Facebook draws 7,000 to anti-Muslim pork sausage party in Paris,” Christian Science Monitor, June 17, 2010, https://www.csmonitor.com/World/Europe/2010/0617/Facebook-draws-7-000-to-anti-Muslim-pork-sausage-party-in-Paris. x In 2011, the group staged a “march of pigs” protest in French neighborhoods with large Muslim populations. The Identitarians feasted on wine and pork, both of which are prohibited under Islamic dietary laws, claiming that such things would soon be illegal in France because of Muslim immigration.* Elaine Ganley, “French radicals get respect in Le Pen's presidential race,” Associated Press, April 3, 2017, https://apnews.com/bc2f5b9d6dea47838e7052d3a27a3729; Associated Press, “French far-right group has message in menu,” Boston.com, December 10, 2011, http://archive.boston.com/news/world/europe/articles/2011/12/10/french_far_right_group_has_message_in_menu/. x 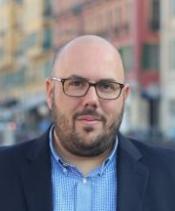 Les Identitaires officially rejects violence, but its protests have at times devolved into violent confrontations with counter-protesters.