Blood & Honour (B&H) is a neo-Nazi skinhead group that originated in England in 1987 from the skinhead music scene. The group promotes white-power ideology through the proliferation of music festivals and recordings.*“BLOOD & HONOUR,” Southern Poverty Law Center, accessed September 10, 2020, https://www.splcenter.org/fighting-hate/extremist-files/group/blood-honour.x B&H claims to be a “musical based resistance network” that acts as a “global confederacy of like-minded freedom fighters.”*Blood & Honour website, accessed September 18, 2020, https://www.bloodandhonourworldwide.co.uk/bhww/.x British skinhead and singer Ian Stuart Donaldson founded the group with Nicky Crane in 1987 and named it after the motto of the Hitler Youth movement in Nazi Germany.*Rebecca Jones, “About Blood & Honour,” Herald Democrat, August 30, 2017, https://www.heralddemocrat.com/news/20170830/about-blood--honour.x Blood and Honour was also the name of a song performed by Donaldson’s white-power band, Skrewdriver. According to B&H, the 1985 song became “an anthem then flagship for generations of people to come who were far sighted enough to see the abyss our people, culture and future faced if we continued on the road we were taking.”*“B & H Introduction,” Blood & Honour website, accessed September 18, 2020, https://www.bloodandhonourworldwide.co.uk/bhww/b-h-history/history/.x

B&H is closely associated with the violent neo-Nazi group Combat 18, which originated as an armed faction of B&H. Donaldson’s death caused a rift in B&H between those committed to promoting white power through music and those who sought out more violent methods.*“Blood & Honour,” Southern Poverty Law Center, accessed September 17, 2020, https://www.splcenter.org/fighting-hate/extremist-files/group/blood-honour.x Combat 18 is still closely linked to B&H. When the Canadian government banned both groups in 2019, it labeled Combat 18 the “armed branch” of B&H.*Mack Lamoureux, “Canada Adds Far-Right Groups to Terror Watch List for First Time,” Vice, June 27, 2019, https://www.vice.com/en_uk/article/8xz77k/canada-combat-18-blood-honour-far-right-groups-terror-watch-list.x 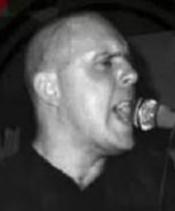 Official B&H chapters use the group’s “Sign of the Brotherhood”: a grinning skull-and-crossbones imposed over red, white, and black diamond on top of a triskelon. The triskelon is an ancient symbol from pre-Christian Europe comprising three curved or jointed segments spiraling from a common center. The red in the diamond represents the “sacred blood” and those who have died defending it, while the black represents courage and the white represents the white ethnicity.*“Sign of the Brotherhood,” Blood & Honour, accessed September 18, 2020, https://www.bloodandhonourworldwide.co.uk/bhww/b-h-history/sign-of-the-brotherhood/.x B&H commonly uses a banner with the words “Blood” and “Honour” separated by a triskelon. B&H propaganda may also reference the original German phrase, “Blut und Ehre.” B&H members frequently use the numerals 2 and 8 or 28 representing the alphanumeric equivalent of the letters B and H.*“Blood & Honour,” Anti-Defamation League, accessed September 11, 2020, https://www.adl.org/education/references/hate-symbols/blood-honour.x

B&H maintains its own prisoner support network, the White Cross, to aid those who have been arrested, charged, and sentenced for crimes related to B&H. The support network is self-funded to ensure “no 28 prisoner is left behind or forgotten in their times of need.”*“B & H White Cross,” Blood & Honour, accessed September 18, 2020, https://www.bloodandhonourworldwide.co.uk/bhww/white-cross/.x