In recent days, Facebook has trumpeted its efforts and success in disrupting influence campaigns undertaken by foreign actors. For some, this represents a change in public relations tactics from the company’s “defensive” nature. And while the company should be commended for taking proactive steps, it is once again not enough. When organizations such as the Counter Extremism Project (CEP) can readily identify instances of how ISIS continues to exploit Facebook to host meetings, link to terrorist propaganda and organize on the popular social media platform, it is clear that the company still has its work cut out for them.

CEP will hold Facebook and CEO Mark Zuckerberg responsible until they remove extremist content and accounts that are the worst of worst and violate the company’s terms of service. On Thursday, CEP identified an active one-week-old post of ISIS leader Abu Bakr al-Baghdadi’s recent speech calling for attacks against the west on Facebook. In Europe, the Nordic Resistance Movement, an “openly anti-Semitic, anti-immigrant and anti-gay” hate group have been using websites such as Facebook to further spread their propaganda. Lastly, documents from the Canadian Security Intelligence Service identified “attacks by extremists inspired over the internet have become the country’s top terrorist threat.”

In addition to Baghdadi, CEP found additional instances of extremist content on Facebook as well.  A one-month old propaganda video from the banned neo-Nazi group National Action, shows one of the group’s leaders condemning immigration and non-white British culture, and calling for unspecified action to preserve white Britain. Two videos from ISIS are particularly brutal and violent. One shows combat between ISIS and Iraqi security forces including several corpses of Iraqi soldiers.  Another depicts several child soldiers, including one (approximately 12-15 years old) executing an accused spy. There is also an execution by throat cutting.

To read more about this issue and see the aforementioned examples, as well as other examples of extremist content, please see the background below. 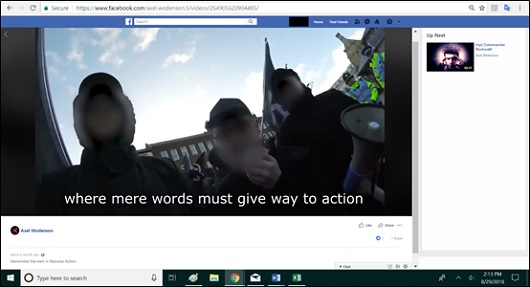 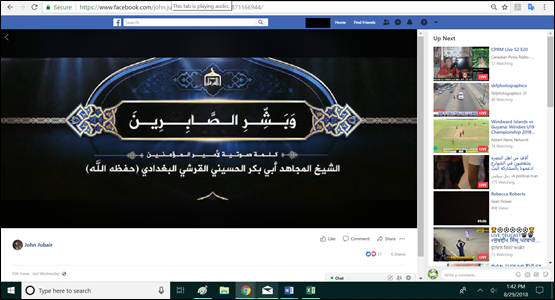 3. ISIS Video On Facebook For Two Weeks With Over 1,100 Views 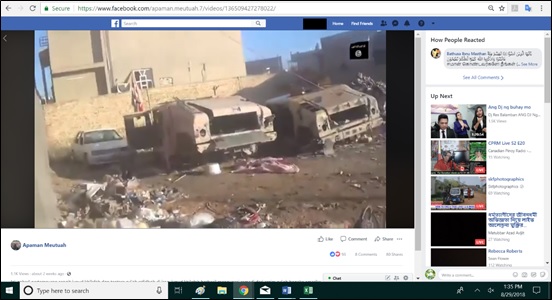 4. ISIS Video “The Flames Of War II” On Facebook For One Week 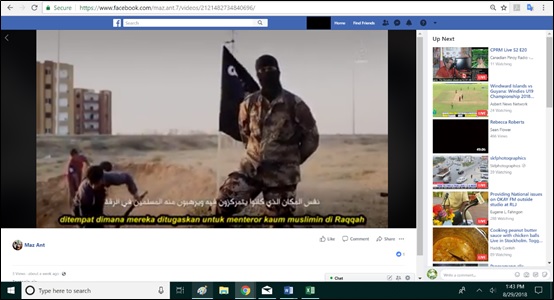 5. ISIS Video On Facebook Featuring Teenage Executioner With Over 600 Views 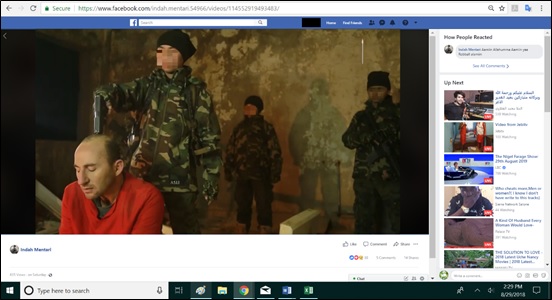 The Nordic Resistance Movement Has Been Using Social Media To Spread Its Hate Propaganda. “During a brisk Sunday last spring, three men dumped a pile of rubbish on the doorstep of an apartment complex in the northern Danish city of Aalborg. The target was Aalborg municipality environment and energy councillor Lasse P. N. Olsen, who lives in the building. A note posted above the trash explained waste was collected from the municipality and demanded politicians clean up more litter. But it wasn’t an environmental protest. The men yelled anti-immigrant phrases and brandished the Nazi salute while dropping the trash, Olsen’s neighbours told him later. The note was signed ‘Den Nordiske Modstandsbevægelse.’ In English: The Nordic Resistance Movement … The Nordic Resistance Movement, or NMR, is a neo-Nazi organisation originally founded in Sweden that is openly anti-Semitic, anti-immigrant and anti-gay. Their goal is to create an ethnically pure pan-Nordic nation, according to the group’s website, and to deport most non-ethnic Northern European residents and dismantle the ‘global Zionist elite’ … Social media has also allowed the group’s message to spread further and connect the group with white nationalist organisations around the world, [Counter Extremism Project Senior Research Analyst Josh] Lipowsky added.” (Karis Hustad, “'Most Radical Organisation': Neo-Nazi Group Seeks To Gain Ground In Nordic Countries,” Euronews, 8/25/18)

CEP-GLOBSEC Webinar: The Muslim Brotherhood in North Macedonia, Bosnia and Herzegovina, and Conclusions for the Region