Major tech giants are facing mounting pressure from law enforcement officials to provide information and monitor online terror activity. The Sydney Morning Herald reported last week that Lynne Owens, the director-general of Britain’s National Crime Agency, is advocating for joint efforts by intelligence-shared allies – including the United States – to push major tech companies for help in decrypting messages sent by alleged terrorists. Owens argued that major tech companies, especially those based in the United States, have been slow to act on countering encryption – a tool commonly used by crime gangs and terrorists. Owens stated the “Five Eyes,” an intelligence-sharing group – made up of Australia, Britain, the U.S., Canada and New Zealand, have the unique opportunity to “speak loudly with one voice.”

Social media websites allow for incitement leading to real life violence. Through the circulation of false and divisive stories, social media posts have been linked to violence offline. In 2014, Myanmar saw two days of violence and unrest where two people were killed and 19 injured in the central city of Mandalay after the erroneous circulation of a story depicting a Buddhist woman being raped by two Muslim men. Officials regained control of the city only after Mandalay’s access to Facebook was blocked. Further, The Wall Street Journal reported that violence has been correlated to hate speech in the United States. According to the Federal Bureau of Investigation (FBI), in 2017, hate crimes rose 17 percent to the highest levels since 2001.  Brian Levin, director of the Center for the Study of Hate and Extremism at California State University, San Bernardino, attributes the rise in hate crimes and violence to a variety of factors, including “the explosion of online hate speech on sites like 4chan” and “Gab.”

Knowing that online hate speech is inciting real world violence, the proliferation of radicalization videos is especially troubling. A new pro-ISIS YouTube propaganda channel titled “Mosul for Studies” has emerged. As of last week, the channel has posted five videos consisting of a robotic voiceover describing ISIS terrorist attacks in Syria and Iraq, as well as alleged civilian casualties caused by the anti-ISIS coalition. The videos depict a mixture of ISIS provincial propaganda videos as well as additional footage from other armed groups (including ISIS opponents) and news sources. As of last week, some of the channel’s videos have view counts of more than 5,500. Mosul for Studies reflects similarities in tone and style to a previous pro-ISIS YouTube group, the War and Media Agency, and has been shared by a War and Media Agency Telegram channel.

A new pro-ISIS YouTube propaganda channel titled “Mosul for Studies” has emerged. As of November 15, the group’s main YouTube channel has posted five videos, all of them consisting of a robotic voiceover reading from an English script, describing ISIS terrorist attacks in Syria and Iraq, as well as alleged civilian casualties caused by the anti-ISIS coalition. The script is very similar to Amaq News Agency written statements. Footage in the videos is a mixture of ISIS provincial propaganda videos with logos edited out and Amaq News Agency videos with logos edited out, as well as additional footage from other armed groups (including ISIS opponents) and news sources. 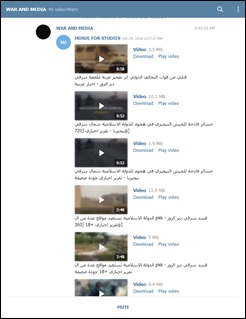 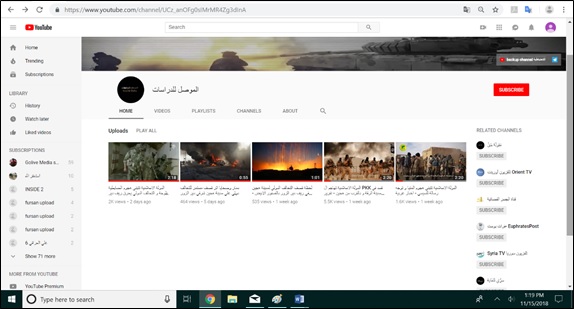 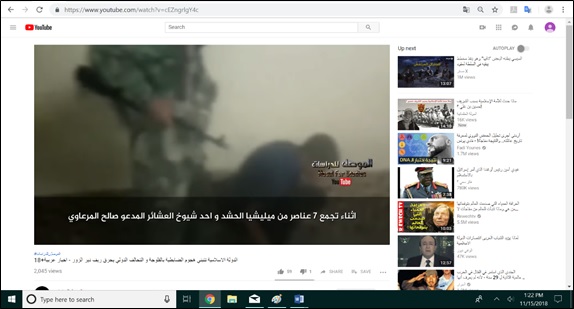 ISIS online supporters have distributed several images encouraging lone wolf attacks following the November 9 stabbings in Melbourne, Australia. While image-based calls for violence by themselves are not unique, these specific calls to action follow a widely publicized event. 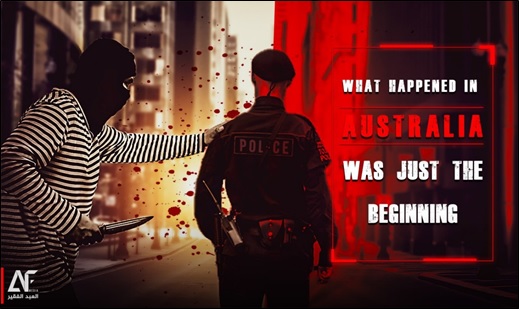 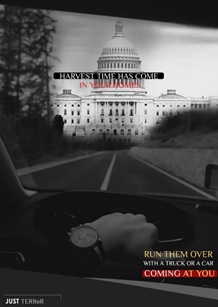 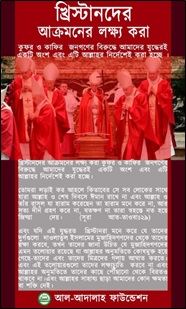 Pro-ISIS Image Calling For Attacks On Christians In Bengali, Located On Telegram On November 13, 2018

A video was located on Facebook that includes footage of Hassan Khalif Shire Ali attacking Melbourne police officers on November 9. Ali stabbed three people, killing one and attempted to detonate a vehicle loaded with gas cylinders, before being killed by police. The video includes ISIS flags and text underneath praising the attacker. On Thursday, November 15, the video had over 1,000 views and had been shared 14 times. The video was originally posted on Monday, November 11. 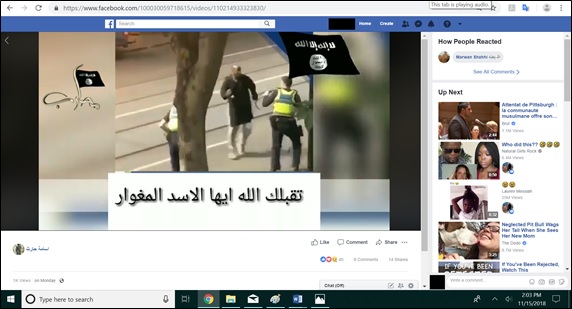 On Thursday, November 15, ISIS released a new video from their self-proclaimed Sinai province in Egypt. The video, “From Darkness to Light,” shows raids on Egyptian military outposts, a suicide vehicle attack and the placing of roadside bombs. It also includes the killing of wounded Egyptian soldiers, police officers and soldiers at roadblocks, as well as three executions. ISIS accuses the Egyptian government of killing civilians in Sinai and damaging property. 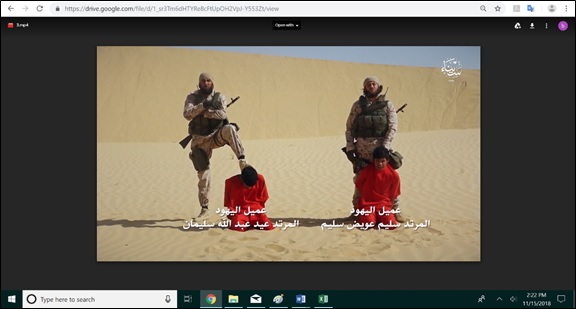 Director-General Lynne Owens Of Britain’s National Crime Agency Calls For Assistance From Big Tech To Combat Online Terrorism. “She said tech giants, who are based largely in the United States, had been slow in putting research and development efforts into countering child exploitation or finding ways around encryption, which is being used increasingly by crime gangs and terrorists. ‘For years, we’ve expected the public to assist law enforcement … I don’t think we’ve been as demanding as we should be with industry, both in the [United Kingdom] and here,’ she said. The ‘Five Eyes’ intelligence-sharing group – made up of Australia, Britain, the US, Canada and New Zealand - had the advantage of being able to ‘speak loudly with one voice’, she said. Pressure on US-based companies would ‘have a much bigger chance of success if we do it together’, she said, adding that she and AFP Commissioner Andrew Colvin would soon be traveling to an Interpol meeting in Dubai where these issues would be discussed. ‘I absolutely understand why they would not be prepared to give policing and law enforcement access to everything all the time. That would clearly be unreasonable. That would overstep the mark into taking away an individual’s privacy,’ she said. ‘But if we were to set a high bar and say that for things that are national security threats, whether it be counter-terrorism or whether it be serious and organised crime, in those circumstances, they should give us access because that is the only way we will stop citizens dying from taking drugs or children being abused or firearms being imported and used in mass-casualty killings.” (David Wroe, “Top British Cop Demands More Help From Tech Giants On Terrorism, Crime Gangs,” Sydney Morning Herald, 11/13/18)

Online Hate Speech Incites Real-World Incidences Of Violence. “This 2014 incident was an early red flag for Facebook, showing how fake rumors spread on the platform could explode into real life. In Myanmar – where around 700,000 Muslim Rohingya have fled since last year – Facebook has provided the backdrop to an upsurge in ethnic violence. Earlier this week, an independent report into the country's use of Facebook found that a minority of users were exploiting the platform to ‘incite offline violence.’ Published by the non-profit Business for Social Responsibility, the report looks into the idea that social media users can be manipulated by misinformation, which in turn can lead to violence between different groups. While social media might not invent these divisions, the way platforms promote emotive, divisive content can escalate existing prejudices. The Facebook-commissioned study points to Myanmar's political atmosphere as part of the problem. But social media-inspired violence is not unique to countries that are new to the internet after years of censorship. Misinformation spread online has been linked to violence in Sri Lanka, Indonesia, India, Mexico, the United States and Germany. Earlier this year, two researchers at the UK’s University of Warwick released a study that examined every anti-refugee attack in Germany between 2015 and 2017. The report found that crimes against refugees were more likely to take place in areas where Facebook use was high and at times when the far-right, populist Alternative for Germany (AfD) party was sharing anti-refugee posts to its page.” (Morgan Meaker, “When Social Media Inspires Real Life Violence,” Deutsche Welle, 11/11/18)

An Increase In Hate Crimes Followed After An Explosion Of Online Hate Speech In U.S. “Hate crimes rose 17% in 2017, the FBI said Tuesday, a jump that was partly driven by a spike in anti-Semitic incidents. The number of hate-crime incidents targeting Jews increased 37%, to 938 in 2017. Anti-Muslim crimes fell by 11% in 2017, to 273. Race or ethnic-based hate crimes jumped by 18% in 2017 to 4,131. Hate crimes targeting black people increased by 16% and were the most for any category of race, ethnic group, religion or sexual orientation. Overall, the Federal Bureau of Investigation recorded 7,175 hate crimes in 2017, compared with 6,121 for the year before. The rise in total hate crimes is the biggest since 2001, when incidents rose to 9,730, a 21% increase. ‘We are definitely at an inflection point,’ said Brian Levin, director of the Center for the Study of Hate and Extremism at California State University, San Bernardino. ‘We have now risen to the highest level in about a decade. That is a cause for concern.’ Mr. Levin said a myriad of factors likely played a role in last year’s increase in hate crimes, including socio-political polarization, a rise in white nationalist activity and the explosion of online hate speech on sites like 4chan and the social-media site Gab.” (Joseph De Avila, “Anti-Semitic Incidents Fuel 17% Rise In Hate Crimes, FBI Says,” The Wall Street Journal, 11/13/18)