The Counter Extremism Project (CEP) reports weekly on the methods used by extremists to exploit the Internet and social media platforms to recruit followers and incite violence. Today’s release shows that two weeks after the New Zealand shootings, the infamous video is still being uploaded over the Internet. Additionally, social media accounts for the white supremacist group Patriot Front were located and ISIS continues its online activities.

“Even though it’s been two weeks since the shootings at the mosques in Christchurch, New Zealand, videos of the attack are still being found. Although it is certainly not as widespread online as it was initially, tech companies should continue striving to remove all instances of the video, full stop,” said CEP Executive Director David Ibsen. “Fascism and white supremacism have found a home on the Internet, radicalizing those who become entwined in its echo chamber. If extremist content such as those CEP identified that are related to the Patriot Front are not removed immediately, YouTube will once again show their critics and the public as a whole that they are unable or unwilling to confront the real threat that white supremacist extremism presents.”

The video made by New Zealand shooter Brenton Tarrant, accused of killing 50 people and injuring 50 others in terrorist attacks on two mosques in Christchurch, is still active on several sites. The notorious video was originally live-streamed by Tarrant with a GoPro camera and originally uploaded to Facebook before spreading around the Internet. Despite the efforts of social media and video streaming sites to remove the video, it is still spreading. 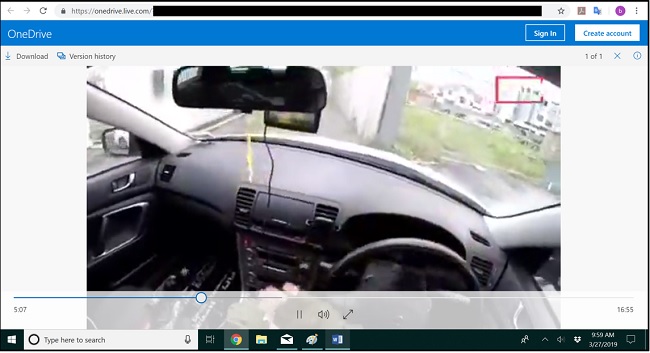 Full video of the Christchurch Terror Attack on Microsoft One Drive. March 28, 2019. 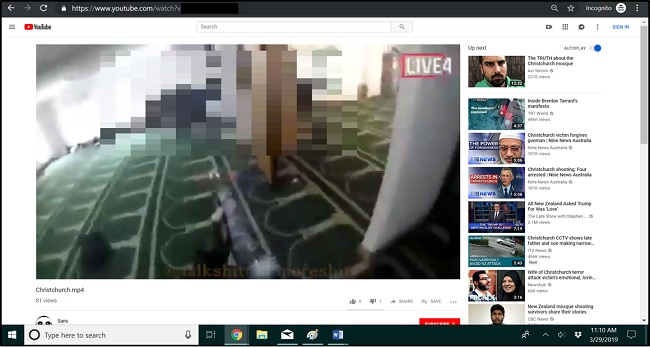 The six second YouTube video that includes footage from the Christchurch massacre video on YouTube. Parts of the screenshot have been modified by CEP to obscure violence. March 29, 2019.

A Twitter account, the primary YouTube account and a backup account for the fascist white supremacist group Patriot Front were located this week. Patriot Front formed from the group Vanguard America after the latter rebranded following the 2017 Unite the Right rally in Charlottesville. James Alex Fields, who attacked counter-protestors with his car in Charlottesville, resulting in the death of Heather Heyer, had marched with Vanguard America during the demonstration and carried a shield with the group’s logo. Fields pleaded guilty to 29 federal hate crime charges on March 27, 2019.

Patriot Front’s manifesto calls for the creation of a new American fascist state to serve in the interest of white Americans. Members of Patriot Front have previously attacked protestors outside ICE facilities in Texas and the group routinely posts fliers and attends demonstrations. In February 2019, three men were arrested in Boston, Massachusetts while hanging Patriot Front propaganda and were charged with weapons related crimes, and assault and battery. In 2018, at least one journalist was sent Patriot Front material through the mail as a form of intimidation. Patriot Front’s logo uses the Roman fasces symbol, and the group’s propaganda frequently invokes racist and anti-Semitic slogans.

Patriot Front maintains a primary YouTube page that had 1,359 subscribers on March 28. The account was created on February 20, 2016, and had an unknown number of videos that are unlisted. Unlisted YouTube videos are not visible on a page, they can only be accessed with the correct link. A backup Patriot Front YouTube account had 500 subscribers, 12 videos and over 17,700 views on its videos as of March 28. Videos posted on the group’s backup account are prefaced with a warning that they have “been identified by the YouTube community as inappropriate or offensive to some audiences.” YouTube previously removed videos by Vanguard America for unspecified reasons. One of the group’s Twitter accounts has 441 followers as of March 28. 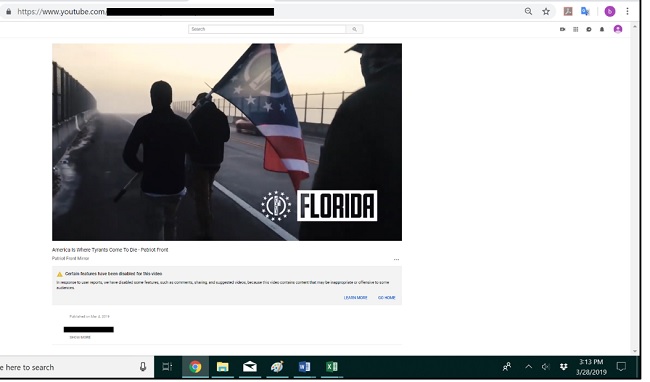 A video for the white supremacist fascist group Patriot Front on YouTube. March 28, 2019.

On Monday, March 25, ISIS released a video from their self-proclaimed province in Sinai, titled “Covenant and Steadfastness”. The video shows IED attacks against Egyptian security forces, and an attack on an outpost near the El-Arish International Airport. The bodies of Egyptian security forces are shown in the aftermath of the raid. The video also includes a scene of ISIS fighters in Sinai re-affirming their loyalty to ISIS’s leader, Abu Bakr al-Baghdadi. 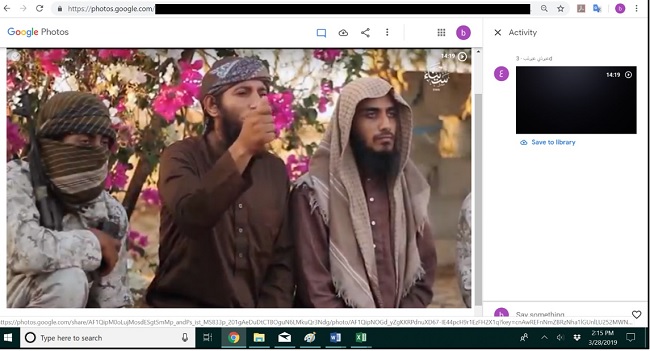 “Covenant and Steadfastness” on Google Photos, approximately three days after it was uploaded.  March 28, 2019.

On March 18, ISIS released a speech from the group’s spokesman Abu Hassan al-Muhajir, that was still available on several websites as of March 28. In the address, Muhajir stated that the group has not been defeated and called for attacks in the West. Muhajir also referenced the Christchurch, New Zealand white supremacist terrorist attack, stating that it was one of many massacres against Muslims committed by the west. Approximately ten days after being released, the speech was available as either an mp3 audio file, or an mp4 video file with a static background on the Internet Archive, file.fm, Gulfupload, top4top, 3rbup, nofile.io and r-x0.