(New York, N.Y.) – The Counter Extremism Project (CEP) reports weekly on the methods used by extremists to exploit the Internet and social media platforms to recruit followers and incite violence. Last week, CEP researchers found links on multiple platforms, including Facebook, for the ISIS video “Makers of Epics 2” which included executions and footage of IED attacks against Egyptian military personnel. Also, CEP researchers discovered over eight gigabytes of ISIS propaganda videos on the Internet Archive and a post by the pro-ISIS tech group Qimam Electronic Foundation warning its users about Facebook data breaches.

Meanwhile, a new neo-Nazi video game was released on an extreme right-wing website on April 20, the anniversary of Adolf Hitler’s birthday. In addition, a website dedicated to spreading the work of neo-Nazi James Mason made a post supporting acts of terrorism and lone actor violence. Also, a website dedicated to sharing plans for 3D-printed firearms, suppressors, and accessories was shared by at least five white supremacist Telegram channels.

Additionally, following the conviction of Derek Chauvin, white supremacist and far-right Telegram channels posted messages of support for the former police officer and expressed hope that Chauvin’s conviction would lead more white people, including police officers, to adopt white supremacist beliefs and turn against the government. Finally, dozens of white supremacist and neo-Nazi Telegram channels celebrated the anniversary of the Oklahoma City bombing by sharing propaganda videos and images celebrating the bomber, Timothy McVeigh, and encouraging additional acts of violence.

CEP researchers continued to find links for the ISIS video “Makers of Epics 2,” originally released on April 17. The video, from the group’s self-proclaimed province in Sinai, contains speeches encouraging ISIS fighters and shows combat between ISIS and the Egyptian military. The video additionally shows IED attacks against Egyptian soldiers and an attack on a tribal forces checkpoint. The video also includes footage of ISIS executing an Egyptian Christian man and executing two men who belonged to a Sinai tribal militia.

The video was shared on Telegram, Hoop, and RocketChat. The video was also located on the decentralized site Siasky.net, the Internet Archive, and two different sites in the NextCloud cloud service, belonging to two pro-ISIS propaganda groups. A clip from the video, which included combat and gore, was located on Facebook, where it had been online for four days after being uploaded by a pro-ISIS account. Two pro-ISIS propaganda websites also shared the video. 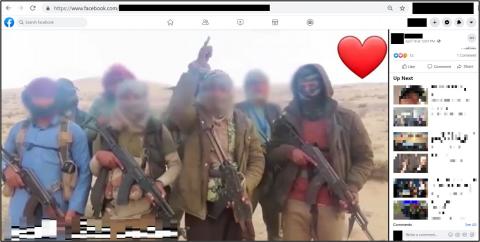 ISIS propaganda video clip on Facebook which was online for four days when it was located. ISIS logos on the top right of the video have been obscured with a heart.

Over Eight Gigabytes of ISIS Content Located on the Internet Archive

The week of April 18 to April 24, CEP researchers located over eight gigabytes of ISIS propaganda videos and other content on the Internet Archive. The videos were uploaded in four different folders, each approximately two gigabytes. Two folders, with 45 views, were uploaded on January 26, 2021, and the other two folders, uploaded on February 5, 2021, had 21 views. The content was not removed after CEP reported it to the Internet Archive.

On April 21, CEP researchers located a post on the PasteThis.To bulletin board platform from the pro-ISIS tech group Qimam Electronic Foundation warning about Facebook data breaches. The post contained information for checking whether a user’s personal information had been exposed in a Facebook data leak.

A new neo-Nazi video game was released on an extreme right-wing website on April 20, the anniversary of Adolf Hitler’s birthday. The main character is a British Gestapo agent in a fictional occupied London. The game’s creator advertised it on Gab, 8kun, and an imageboard on the dark web that encourages lone actor white supremacist violence. Extremist games allow groups and individuals to promote and spread ideology, encourage the dehumanization of their perceived opponents, portray violence as positive, and further spread propaganda.

On April 21, a website dedicated to spreading the work of the neo-Nazi James Mason made a post supporting acts of terrorism and lone actor violence. The post, which was initially on 8chan, argued that acts of terrorism were frequently successful in wars against stronger state opponents and impacted or changed the decisions made by ethnic groups targeted by violence. Endorsing great replacement theory in a way similar to the El Paso shooter, Patrick Crusius, the post advocated for using violence against immigrants to the U.S. to prevent future immigration. The site claims to have over 10,000 monthly visitors.

While the website states that it is not affiliated with the Atomwaffen Division (AWD) or National Socialist Order (NSO), the site lists numerous members of AWD as contributors and at least one member of the latter as a contributor in addition to having posted NSO propaganda. The website also encourages financial support for imprisoned members of AWD. The website uses Epik as its registrar and Cloudflare as its name server. On April 23, the British government added AWD and NSO to the list of proscribed terrorist organizations.

A website dedicated to sharing plans for 3D-printed firearms, suppressors, and accessories was shared by at least five white supremacist Telegram channels. The website, which does not endorse a specific political ideology, was shared in conjunction with the release of a new design for an improved 3D-printed submachine gun. The Telegram channels shared the website approximately two weeks after a British teenager was accused in court of planning a terrorist attack with a 3D-printed firearm.

Following the conviction of Derek Chauvin on three counts related to the 2020 murder of George Floyd, white supremacist and far-right Telegram channels posted messages of support for the former police officer and stated that the verdict would be favorable for them in the long run. Multiple channels stated their hope that Chauvin’s conviction would lead more white people, including police officers, to adopt white supremacist beliefs and turn against the government.

A Telegram channel purporting to belong to the British chapter of the Proud Boys affirmed their support for Chauvin both before and after the verdict, while the main Proud Boys Telegram channel used the occasion to state that the justice system is politicized and unfair.