(New York, N.Y.) - The Counter Extremism Project (CEP) reports weekly on the methods used by extremists to exploit the Internet and social media platforms to recruit followers and incite violence. This week, a pro-ISIS account appeared on Minds, a “crypto social network.” Additionally, a new ISIS video was released on multiple websites, Siege Culture acquired a new website domain, a Neo-Nazi group on Telegram praised the Christchurch attack and the assassination of German politician Walter Lübcke, and a music album praising Brenton Tarrant was located on Google Drive.

A pro-ISIS account was located by CEP researchers on the Minds social media platform. The account, which was created in April 2019, has posted hundreds of pieces of ISIS propaganda, including videos, mp3s, news reports, and links to content on other websites. On August 22, the page had 4,692 non-unique views.

“Minds is one of several lesser-known social media platforms that extremist groups such as ISIS have migrated to,” said CEP researcher Joshua Fisher-Birch. “Like many of these alternative websites, Minds prides itself on its lax content moderation policies and being an open source champion of free speech. However, their Content Policy prohibits terrorist content. Minds should enforce their own policies and remove extremist content.” 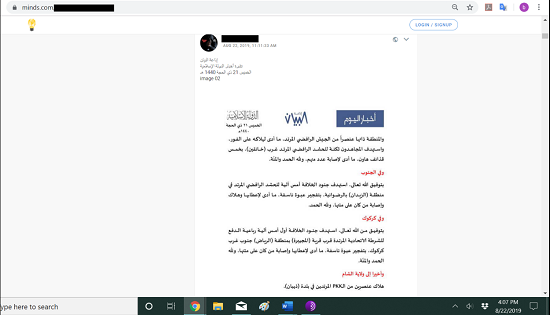 On Tuesday, August 20, ISIS released a new video from their self-proclaimed province in Syria, as part of the group’s “The Best Outcome is for the Pious” series. In the video, a speaker states that the group is still operating in Syria, and that they will soon commit more attacks in the country. The video features approximately three dozen ISIS fighters who re-pledge their allegiance to ISIS’s leader Abu Bakr al-Baghdadi. It also features old footage of executions. 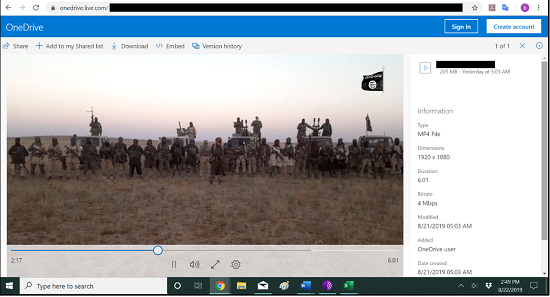 “The Best Outcome is for the Pious” on the Microsoft One Drive, over 24 hours after it was uploaded.

The website Siege Culture, dedicated to James Mason and the Universal Order ideology, has a new web domain. The website includes a PDF of Mason’s book Siege, and an audio version, both hosted on the Internet Archive, as well as essays and blogposts by Mason and his followers on topics including national socialism and terrorism. The website also includes an email contact point and a section for Monero cryptocurrency donations. The website states that it is not a recruitment platform for the Atomwaffen Division (AWD) or any other organization, but also praises AWD for helping to spread Mason’s ideas and includes an essay by an alleged AWD member. The website’s registrar and name server is Epik. The previous iteration on the former domain used Tucows as the registrar and Cloudflare as a nameserver. Epik withdrew services for 8chan on August 6, 2019 stating that they were concerned with “inadequate enforcement and the elevated possibility of violent radicalization on the platform.”

A European-American neo-Nazi group that is inspired by the book Siege released a propaganda and recruitment poster on their Telegram channel on August 21 that praised the Christchurch attack and the assassination of Walter Lübcke. The group is alleged to have members in the Netherlands, Estonia, Norway, and the U.S., and has sought to create chapters in the United Kingdom and Germany. The group has previously encouraged violence, including lone actor attacks, against Jews, LGBT people, and politicians. Lübcke was assassinated by a neo-Nazi extremist, Stephan Ernst, on June 2, 2019. The poster shows a man wearing a skull mask pointing a handgun at Lübcke. There is no evidence that Ernst, who had links to the National Democratic Party and Combat 18, had any connection to the group that made the poster.

An album praising the alleged Christchurch shooter Brenton Tarrant and urging additional violence against Muslims was located on Google Drive last week by CEP researchers. The album contains 25 different songs that contain lyrics referring to Muslims as insects worthy of death, urge violence against Jews, praise Dylann Roof and Anders Breivik, and include sections of Tarrant’s manifesto. Album art included photos of Tarrant taken from his video stream of the massacre. The album was uploaded to Google Drive on June 5, 2019.

Google’s Abuse Program policies prohibit content that threatens “to cause serious physical injury or death… or rall(ies) support to physically harm others.” Additionally, the same policies prohibit “content that promotes terrorist acts, incites violence, or celebrates terrorist attacks,” as well as hate speech, which Google defines as “content that promotes or condones violence against or has the primary purpose of inciting hatred against an individual or group on the basis of their race or ethnic origin, religion, disability, age, nationality, veteran status, sexual orientation, gender, gender identity, or any other characteristic that is associated with systemic discrimination or marginalization.”